The Armatelorum is a 90-page resource manual filled with pre-generated weapons and suits of armor using the weapon and armor construction rules from the Dice & Glory Core Rulebook. It is a valuable resource for any Player that has a need to customize their character. Game-Masters will also find it invaluable to equip their NPCs with a variety of arms.

This sourcebook focuses on every major category of ancient weaponry such as swords, pole-arms, bows, scythes, even siege engines. It includes rarer versions of weapons and armor such as zweihanders, the zanbato, weapons of the samurai & ninja, messers, recurved bows, shillelagh, and ball & chain weapons even muscle cuirasses.

The weapons and armor found within this manual were written with historical facts as well as keeping the fun factor of fantasy roleplaying in mind. Each weapon or piece/suit of armor has a table statistics entry and a short paragraph description with some variations mentioned along with applicable stats and modifications.

The appendices include notes on punch weapons, prosthetic weapons, crystal weapons, and there is an index of stylized martial arts. A full resource of melee weapons, ranged weapons, siege weapons, and shields, helmets, and armor!

Get it in PDF format here:

For those Game-Masters wanting to use Zombie Apocalypse elements in their modern-set campaigns!

Zombie Horror is a resource manual filled with pregenerated creatures, characters, and modern weaponry. It is a valuable resource for any Game-Master containing applicable fully generated NPCs along with some maps of such places such as a shopping mall, an underground bunker, a secret lab among others.

This sourcebook focuses on the process of apocalypse, how to survive such a scenario with plenty of adventure ideas, and the zombies themselves. It includes information on several classic and unusual zombie variants as well as such items as necro-kinesis and those born infected.

Zombie Horror is a 100+-page book available in PDF format at DriveThruRPG.com and available in Print editions through Lulu.com. It is a supplement meant for the Dice & Glory ttRPG system.

Arvan: The Land of Dragons, the new campaign setting for Dice & Glory. It centers on the Age of Adventure and a burgeoning international trade and era of conquest. As well as the reclamation of territory from the supernatural forces that have dominated it for so long. This resulting from an extended Dark Age of Mad Mage-Lords and Dark Warlords. In addition, in the East an ancient empire struggles to slow its disintegration into smaller feudal princedoms. While its central theocracy seizes power for itself by focusing the chaos on the empires’ former Western colonies. Power is up for grabs for those willing to seize it.

The world’s technology level hovers between the late Iron Age and the High Middle Ages. No “Tolkienesque” classical player races exist with Arboreans (tree-men), Amazons, Fauns, Ratlings, Naga, unicorns, and Hill-Giants instead. Of course, there are still human beings. The world of Eu, the planet on which the setting of Arvan exists, has a healthy dose of dark mystery along with a patina of medieval grit. It has realistic underpinnings established for the fantasy of the world to exist on. Inspirations include ancient Rome, Greece, the ancient Americas, as well as Warring States Era China, with some influence from ancient Africa and the Celtic lore and history of Europe not to mention Ancient Greece.

The setting focuses on an “Age of Adventure” wherein the players and their characters can explore and engage the world. Players have a chance of making a mark on the world of Eu. The focus of the setting is adventure be it raiding and pillage, thievery, monster hunting, dragon-slaying, establishing trade routes, exploration, or conquest.

This setting was nearly 10 years in the writing and evolved after several years of role-play. The history of Eu and its cultures were constructed to provide a deep background for fantasy games that may stay as standard and shallow as they please or take a deep dive into the people and places of the fantasy world.

The PDF is available right now at DriveThruRPG.com and RPGNow.com!

The print edition will be available sooner than expected from Lulu.com but more on that later.

Unfortunately the Arvan setting will not be released on time due to the art simply not being done. We originally shot for a November 2016 release but a few unforeseen situations cropped up and the month of release kept getting pushed back until December. Of course, by the beginning of October we were out of money, the budget of the book was bust.

The art will be done and the book will be finished. So we have set a specific date of release. The date set is February 15, 2017. We will first release the pdf version through the normal channels and then by the end of March it will be available in its print edition. 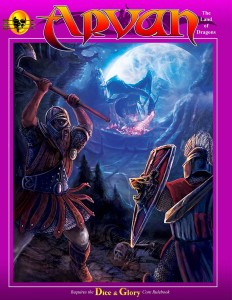 This Dice & Glory world book includes a mass of general information on the planet and its peoples. Also a great many details about geography, flora, fauna, natural resources, places of interest, religions, cultural spheres, ethnic groups, and archetypal equipment for each of the 7 main regions of the sub-continent of Ar. There is supplemental and background information on the ancient nations of the eastern side of the continent, called Van. There is also introductory info on the world of Eu on which the continent of Arvan floats and a GM section dealing with time measurement and the multiple Moons of Eu among other GM-Only details!

A Quick Word about the Blog

For those of you who read my gaming blogs, the blog will return next week. Due to the Cabal of Eight campaign sessions being a little erratic my material is running up to the current game-play. Fortunately, we have a (hopefully) stable play schedule coming up through the holidays so it should resume weekly as usual. That is, weekly barring any information that may be given away to the players via the blog anyway.

*UPDATE TO THE UPDATE* 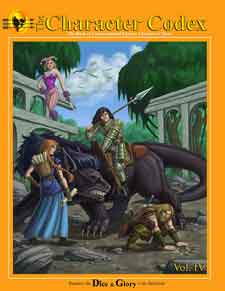 The Character Codex IV: Book of Unconventional Character Classes is now available in pdf format via RPGNOW.com and DriveThruRPG.com!

A new Character Codex containing specialist fantasy character classes that are strange and unconventional adding new flair to any Dice & Glory campaign! This book is a great resource for both Players and Game Masters wishing to introduce some eastern flavor into their game! Among those classes that can be found within the new Character Codex’s pages are the Dragon-Blood Warrior, the Leatherneck, the Leopard-man, Skull-Cleavers, Bookworms, High Sages, and Zombie Creepers!

The new Player’s Handbook has been released and is currently available at RPGNow.com here. A print edition will be available through Lulu.com Aug. 29!

This 114-page supplement reprints chapters 1, 3, 4, 5, and 6 from the Core Rulebook (so GM’s no longer have to share their copy of the CRB) and includes new material to help new and experienced players to create fully realized characters with a full chapter on The Basics (group role & relationships, expanded disposition table, rounding out the details), Step-By-Step Character Creation (a walkthrough of 14 steps), and Character Starter Packages. This book has 9 chapters and a complete index of Specialist Character Classes for all current Dice & Glory publications. 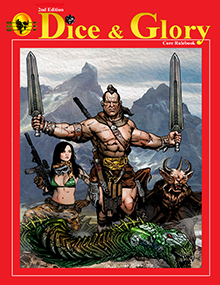