This is the map to the Deadfall Caverns, a pre-generated and marked up map for use with Dice & Glory. It uses a basic key (Note: the small triangular arrows denote edges of a domed ceiling) and numbered portions for the ease of GM’s wanting to populate them.

Manifold maps can be used at the discretion of Game-Masters to add a new crawl type adventure or dueling field to their game. These are self-contained maps that fit on a single page and require only the prep-work to populate them as well as descriptions to flesh out certain areas.

This map was designed around the idea of a cavern with a large body of water flowing underneath it. This body of water accessible from outside near the mouth of the cave although the water goes quite deep. There are many potential ambush points and plenty of nooks and crannies where enemies can hide. The terrain is also varied with water traps, sandpits, cliffs, and holes that fall into other parts of the cave system (indicated by the 8-pointed black stars). The scale is meant to be 5 sq.ft. per square.

The Map PDF is hosted on Mediafire.

The Ullarhg are a fierce herd beast that tramples enemies with their hooves. As well as goring them with their tusks and horns, and resist attack with their spikes and thick hides. A new pregenerated monster for Dice & Glory that will add some danger and awe to any GM’s campaign. These tough and monstrously strong brutes are a challenge to any adventurer.

These appear as terrifying bull-boar-rhino hybrids. They are ponderous in weight and large in size. Ullarhg use their boar-like tusks, bovine horns, and rhino-nose-horns to great effect in battle. Their thick rhino-like hide and spikes grant them protection from most weapon-strikes.

Bizarre Beasties can be used at the discretion of Game-Masters to add variety to their game worlds easily and quickly. So that GM’s can drop the fully fleshed Ullarhg into game sessions immediately without any prep-work beyond reading the document. Finally, the Wolf-Bat is a great addition to any GM’s bestiary.

Powerful Bull-Boar-Rhino herd beasts with an array of horns and tusks!

For a while now a few people have asked for a spell list. A list that those playing Clerics, Paladins, Priests, and 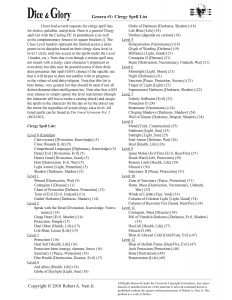 other Clergy Class characters with spellcasting abilities can use. So, I have come up with a very general spell list conveniently sub-categorized into levels.

Genera will consist of requested material and various self-contained excisions from published material that would not otherwise see the light of day. Click the link below to download the PDF via the Mediafire website.

This file can also be had via the Dice & Glory Players League on FB as well in the Files section.

The Wolf-Bat, a fiendish beast resulting from the combination of a bat and a wolf. A new pregenerated monster for Dice & Glory that will definitely add a nasty surprise to any GM’s campaign. These murderous winged monsters are fresh from Hades.

I wondered what this combination would present then I added the fiendish template. I found the trademark of a similar image after. They appear as shaggy, black wolves with a greasy coat and the wings of bats on two legs instead of four. They fear the light and have a horrendously vicious bite. In addition, they are also pure chaotic evil.

Bizarre Beasties can be used at the discretion of Game-Masters to add variety to their game worlds easily and quickly. So that GM’s can drop the fully fleshed Wolf-Bat into game sessions immediately without any prep-work beyond reading the document. Finally, the Wolf-Bat is a great addition to any GM’s bestiary.

Here’s another fantastic item to drop into any Dice & Glory campaign. However, it is not strictly speaking an object. Instead it’s a clever use of a combination of spells, a locale, and some mundane but high quality weapons. It has the potential to pull double-duty as a hidden stash and an enemy’s clever gimmick.

A sudden need to flex the magic system inspired it. There are endless variations depending only on character resources and their scope of spell knowledge.

Wondrous Objects are pregenerated fantastic items, mostly magical, for Dice & Glory. At the discretion of the GM wondrous objects can add a reward or additional threat to their game world easily and quickly. Also as pregenerated items Game Masters can drop them into a game session with little prep-work beyond reading the PDF.

A hidden room of weapons summoned only by its master!

The Crow Sloth, a pregenerated monster for Dice & Glory that can add a little surprise to any GM’s campaign. These creatures are massive brutes that will attack and kill any targets smaller than themselves. They leave the corpses of their victims to “ripen” for a few days before returning and devouring the corpse.

Inspired by the classic Owl Bear. However, combining instead the best abilities of a Crow/Raven with those of the Giant Ground Sloth (Megatherium). They are a giant brute type creature that will fight to the death and highly aggressive.

Bizarre Beasties can be used at the discretion of Game-Masters to add variety to their game worlds easily and quickly. So that GM’s can drop the fully fleshed Crow Sloth into game sessions immediately without any prep-work beyond reading the document. Finally, the Crow Sloth is a great addition to any GM’s bestiary.

A giant crow-headed sloth-beast that kills with its massive claws and dagger-like beak!

Okisibuso, a strange race of para-elemental humanoids where one-half of their bodies is solid stone. The PDF contains stats for the base race itself, a warrior and Stone-Walker NPCs. Also a brief description of their culture and ethnicity, and mass combat unit stats. The package also includes a unique racial class, the Stone-Walker, and a form of stylized martial arts, Stone Fist Wrestling.

Weird Races are pre-generated fantasy races for Dice & Glory. At the discretion of Game-Masters (GMs) Weird Races can add richness and variety to their game worlds easily and quickly. Because the Okisibuso are fleshed out enough GM’s can drop them into game-sessions using them immediately without any prep-work beyond reading the document.

The Gorvil, a pre-generated monster for Dice & Glory that can add unpredictability to any summoner’s repertoire. They are horrible lizard-bats, creatures of the dark and lurkers of shadow! The Gorvil are unnatural enemies of light and often fight to the death. As such, summoners favor the near-mindless creature.

This time the monsters are inspired by those described in the notorious satanic-panic masterpiece of mediocrity, Mazes and Monsters by Rona Jaffe. I have read this and the other two in what can best be called the terrible 80’s-panic trilogy: Dungeon Master by William Dear and Hobgoblin by John Coyne. Frankly, Jaffe’s novel is the worst. At best it’s a chemistry-less romance with fantasy roleplaying tossed in as a shallow gimmick. Also it uses mental illness as a cheap story device. However, the few details about the RPG they’re playing are interesting. But there are very few of these details in the novel. The only idea given any elaboration is the Gorvil monster. Of what little service Gorvils are given anyway.

Bizarre Beasties can be used at the discretion of Game-Masters to add variety to their game worlds easily and quickly. So that GM’s can drop the fully fleshed Gorvil into game-sessions immediately without any prep-work beyond reading the document. Finally, the Gorvil are a great addition to any GM’s bestiary.

One-eyed bat-lizard-monsters that skulk in shadow!

Note that the other two novels that I mentioned above are almost as bad as Mazes & Monsters. I cannot recommend any of these three books. Although there are flashes of interest or a little suspense sprinkled in. However, the work it takes to get to these tidbits isn’t worth it.

The mystical Manfruit tree, a pregenerated supernatural plant for Dice & Glory that adds a legendary element to a campaign. Especially if it’s revealed as the ultimate treasure or final goal. Also these trees are extremely tough though like mundane trees they are unable to take offensive actions. Additionally they are physically tough and can take certain passive actions to resist damage.

Brilliant Botanics can be used at the discretion of Game-Masters to add variety to their game worlds easily and quickly. The Manfruit tree is fleshed out enough for GM’s to drop them into game-sessions without any prep-work beyond reading the document. Finally, Manfruit trees are a great addition to any GM’s bag of tricks & treasure.

Brilliant Botanics also includes a brief Magic Abstract describing how mages may use these supernal vegetables in their spells and potions as components.

Inspired by the Chinese literary classic Journey to the West!

The Throgg, a pre-generated monster for Dice & Glory that can add unpredictability to any summoner’s repertoire. Also these creatures are massive brutes with an appetite for anything they can successfully kill, chew, and swallow. Additionally they are fairly resilient against certain attacks as well as being tough.

Bizarre Beasties can be used at the discretion of Game-Masters to add variety to their game worlds easily and quickly. Throggs are fleshed out enough for GM’s to drop them into game-sessions and their bestiaries to use immediately without any prep-work beyond reading the document. Finally, Throggs are a great addition to any GM’s bestiary.