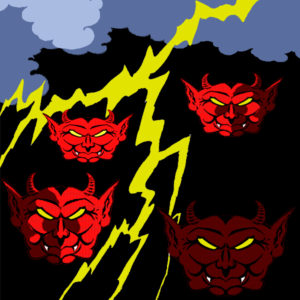 booty someplace in the cabal room. After thoroughly searching the chamber Gornix (played by Gil) was able to find a small alcove behind a false brick in the hearth. They stashed a bag of gems (3 diamonds, 3 sapphires, 2 jade pieces, 1 emerald, and 3 moonstones) there along with some dragon’s teeth and the lotus seeds.

While they had done this they failed to notice that the amazon Athfonia (played by Perla) had slipped away just after they split the talons. The Ferenoi had absconded with her fair share of the gems and currency so the young mages simply shrugged her absence off.

Concerning the gear, Excor (played by Cris) took the Platinum Key encrusted with diamonds (Level 12, Knock 3/day used by inserting and turning the key, Passdoor 1/day used by tapping the key on the door), 1 healing potion, and the Jet Amulet (Level 5, Shield at will 1/day). The Jet Amulet won in a roll-off between Cris and Jenn.

Fauna (played by Jenn) took the polished bronze dagger with the carved jade grip (Level 8, +2 magic modifier, +4 to Luck level while being wielded), the mantrap seeds, the mandrake root, 1 Neutralize Poison Potion, and 1 Heal All Potion.

Gornix took the Electrum Ring with black enameled runes (Level 20, Call Nature’s Ally [Eagle] 2/day) and a Heal All Potion. Excor put the heavy bronze spiked mace under his chair as nobody wanted to actually continue carrying the weapon around.

Szoosha (played by Isis) took possession of the ruby-studded Copper Bracers inlaid with silver (Level 16, Armor Bane at will 1/day, +2 magic modifier to hand strikes and to bracer parry), 1 Neutralize Poison Potion, and 1 Claws of the Beast Potion.

Equipped with their new gear and their purses fattened with their shares of the loot the young mages decided to accompany Gornix to his apartment since he was still carrying the Amber Bee. It was still night though the wee hours. Black storm clouds filled the sky.

As the small group of mages walked through the city streets the lighting flashed and thunder cracked across the sky. They were about half-way to Gornix’s apartment when Fauna spotted the dark outlines of four winged imps following them.

Fauna: “Guys! We have company!”

Excor pulled his Copper Spike and shot a lightning bolt at the lead red imp barely scratching it. The third imp flew up to Gornix to smash its tiny split-hooves into his face as lightning flashed the sky. Fortunately he parried. The first imp exhaled a cone of fire catching both Fauna and Szoosha in the area of effect. Fauna lucked out and took no damage (Natural 20) but Szoo was badly burned and stunned by the blast (forced a Recovery roll so he didn’t die).

The second red imp did the same catching Szoo and Excor in its fiery breath. Szoo dropped into unconsciousness from the burns. Excor lucked out and took no damage (Natural 20’d it as well). Fauna forced her Heal All potion down the Naga’s throat. The fourth imp blasted its fire breath at the young mages singing them all. Gornix whacked imp number three with his staff but dealt no damage.

The first imp kicked Excor in the head drawing some blood. The second imp kicked Fauna in the face whom walked right into the blow while trying to avoid (she rolled a Natural 1). Fauna was stunned and bleeding from the monster’s nasty hooves, she was forced into a Recovery roll to stay on her feet. As Szoo got up imp number four kicked him in the face with a critical blow (N20) horribly injuring the black-scaled naga. Gornix unleashed Chrono-Missile at number three, twice, significantly wounding the small demon.

Imp number one burst into flames (it’s Blazing Aura [fire] ability) as did number four. Szoo cast Elemental Half-Plate Armor [fire] on himself. The flames coursed over his scaly flesh and hardened into strange looking plates of a mystical nature. Excor leveled his spike at number one slightly nicking the demon with his lightning bolt. Imp number two and three ignited their blazing auras as well. Gornix blasted the third imp again with his chrono-missiles horribly wounding it. The first imp kicked at Excor’s head drawing some blood.

The fourth imp tried to kick Szoo in the head but missed. Excor quickened a lightning bolt on imp number one but only slightly scratched it again. Szoo cranked back his staff, swung a mighty blow at imp number four, and nearly threw his weapon away as lightning flashed overhead. Luckily he snatched it back before it fully escaped his grip. Fauna slung a lightning bolt at number two dealing some damage to the little monster. Number two responded with a fearsome face kick but was parried easily by Fauna. Gornix again shot chrono-missiles at number three finally blasting it into oblivion. He then cast close wounds on himself.

Fauna cast another lightning bolt at number two dealing some damage to it. Number four tried to fly over and kick Szoo in the head again but locked its hooves with his staff. Excor leveled his spike at number one hurting it some with an electrical bolt. Number two tried to smash Fauna in the face again but she parried. Number one tried to cast Pox on Excor but he was able to resist the curse. Gornix took some time to check his array of wizardly knowledge about the imps (his Dark Knowledge Wizard specialist class ability) shouting out to the others where the creatures’ weaknesses lay. Szoo kept the fourth imp’s tiny hooves locked with his staff.

Jenn: “Gawd! These things are tough!”

Fauna cast a lightning bolt at number two severely wounding it. Imp number four tried to break the lock with Szoo but couldn’t break loose. Number two tried to kick at Fauna but missed horribly and fell to the ground from the air. Number one tried again to stamp its hooves into Excor’s forehead but was parried due to pure luck (Cris rolled a natural 20 parry). Gornix swung his staff at the imp on the ground but missed. Szoo maintained his lock on imp number four. Gornix made another swing with his staff before the fallen imp could leap into the air and bashed its skull.

Gornix swung again at number two’s head cracking its dome. Fauna cast lightning bolt at number two but the creature avoided the bolt. Number two leapt into the air and kicked at Gornix but missed. Excor used his spike again at number one adding to its multiple abrasions. Number one failed to cast Pox at Excor. Number four failed to break Szoo’s lock. Szoo, overpowering imp four, swung his staff and slammed imp four into the ground.

Gornix swung his staff at number two again but the blow was easily parried. Fauna launched another lightning bolt at imp number two and finally blasted it to bits. Number one kicked at Excor again but missed. Imp number four tried to break the naga’s grapple again but again found itself too weak. Szoo maintained his grip. Gornix used his electrum ring to summon an eagle and sent it to attack number one. It missed.

The Other Players (in unison): “NO! Maintain your grapple!”

Excor leveled his copper spike at number one again but did no damage. Gornix attempted to perform a coup-de-grace on number four but he only slightly wounded it. As a result of Gornix’s strike it got free of Szoo’s grip. Imp number four jumped up into the air and took wing. Fauna cast a lightning bolt at number four dealing some damage. Szoosha dropped his staff and unsheathed his dagger. Number one tried to kick Excor again and again missed.

Excor cast Close Wounds on himself. Gornix’s eagle again struck at number one but missed. Gornix let loose another barrage of chrono-missiles at number one finally blasting it from the stormy sky. Fauna cast lightning bolt on number four wounding it. Number four went to kick Gornix in the face and he took the damage and simul-attacked (using his Battle Magic feat) with the chrono-missile spell finally killing it. Excor found Szoo’s lost dagger. All were badly wounded, nearly out of magic and the vitality needed to work it.

The mages limped back to Gornix’s apartment as fast as they could. They barricaded the door and secured the window shudders. Gornix cast Close Wounds on himself and Fauna applied healing salve to everyone including herself. They figured they were safe enough to not set a watch, as if they could if they wanted to.