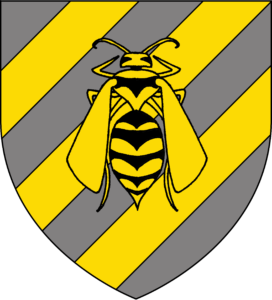 to Bumble’s house in the Western Cliffs District of the city of Ezmer. They had already delivered the mysterious Dungeon Heart gem to the ratling antiquarian Afsik the strange in his sea-salted, musty, crowded shop in the Harbor District the previous day. They were hoping to gain an audience with Bumble’s master, Xanto the Wasp.

It was the 18th of Early Summer and the better part of the officially nameless cabal stopped at the gates that led into the Western Cliffs District. The guards didn’t want to let them through as they “didn’t appear the sort to be let through”. After some haggling, failed attempts at charming the guards, and bluffing at being “couriers”, the downtrodden mages turned to leave but the lead guard held out his hand and coughed lightly.

Fauna (played by Jenn) the only one to take the hint, dropped a platinum piece into his grubby palm.

Cris (Excor’s player): “Whoah! What’re giving him a PLATINUM for!”

However many objections the others had to such a significant bribe, it expedited Fauna in her goal to fetch Ilna, aka Bumble, and bring her back to the gate to meet with them. Of course, it took zero time for them to convince Bumble to lead them back to her master, known as the Wasp. He lived in a small cottage behind her family’s estate across a small but verdant garden.

The cottage was a small longhouse after the Westlander fashion of old with a high thatched roof though with a small covered porch before the heavy dark-wood front door. Bunches of creeping vines and dark ivy covered most of the plastered walls and kept the small porch dark, damp, and fragrant with the musk of decaying vegetation. Bumble rapped on the door.

Suddenly, in mid-knock the door was thrown open and Bumble’s master, Xanto the Wasp, thrust himself over the threshold, inflated chest first. He was an older effete gentleman of the Ivoran persuasion. He had on plain yellow patterned silk robes with a jeweled necklace dangling over his breast and a precious ring on each finger. His hair and pointed beard were jet black with white streaks over the temples. His hair and beard slicked with scented oil, a pair of bejeweled red felt slippers on his feet.

Xanto the Wasp (pointing a long mandarin-nailed finger at Bumble’s nose): “What is the meaning of all…” he made an emphatic gesture with his left hand, “this!”

Bumble was speechless and couldn’t stop nervously shrugging. The others were at once appalled and entertained by the scurrilous dandy before them.

The Wasp: “Don’t you magelings know who I am! I am Xanto the Great! Known as the Wasp for my …”, he relaxed his stance and dropped his arms that had been outstretched to the sky and assumed a more friendly position, “deadly demeanor and rapier wit!” His left hand bent at the elbow, fingers rigid and apart, and his hand shot up.

Gil (Gornix’s player): “Guys! We can’t trust him he’s in on this! Remember the last game and the mushroom…”

Cris: “No. That was another campaign, our guys, these guys don’t know any of that!”

The Wasp (looking outraged): “Why of course NOT! What would appearances dictate ME the mighty Wasp; slayer of dragons, CONQUER-OR of the millennium mushroom! A MAN whose reputation extends from Hirok-Nor to Skullhead!”

His mouth opened wide and they could all hear the air suck in as he took in a massive breath in preparation for a monumental and scathing screed on how such a man as he should have his important work interrupted, to be so inconvenienced.

Fauna (unimpressed; Jenn rolled her eyes): “We have the Amber Bee; some demons have attacked us and are chasing us. I just spotted a red wing beating on the other side of your cottage’s roof.”

The Wasp (immediately ushering them into his abode): “Quick! Quick! Come in my friends my good good young friends!”

Jenn (to me, the GM): “Y’know he reminds me of that guy… y’know THAT guy from that documentary we watched about that band you like?”

Cris: “Nooo! Naw. I imagine him more like Alice Cooper all dandied-out with the black eye-makeup on!”

As soon as she could fit a word in edgewise, Bumble grudgingly admitted to taking his gold bee and amber ‘paperweight’ and that her friends may be in some sort of trouble because of it. The Wasp chided Bumble and knuckled her scalp. She voicelessly yelled in pain. He snatched up the Amber Bee and pointed to a parchment laid out over a desk at the other end of the small room.

Jenn: “Hey! I don’t like how he’s treating Bumble!”

Xanto went on to tell them that the one sending the red imps, or rather fire imps, was one Haxat the Great an outlaw demon-summoner from Skullhead. As he placed the ‘paperweight’ onto the parchment within the circle of carefully drawn runes he explained that the scroll shields the Amber Bee from magical detection and scrying attempts. He turned suddenly and boxed Bumble’s ears for good measure. She was now grabbing her ears and silently enduring the pain with a pained grimace.

Jenn (to the GM, me): “Ooh! If he does that again! Fauna is making an angry face at the Wasp!”

The Wasp turned back to the desk and rolled the gold bee up in the runic parchment and held the scroll out to Szoo who immediately took it in hand. Excor immediately turned and left not wanting anything to do with “that thing”.

Szoo tried to hand it back to the wiry wizard. He held up his hands and shook his head.

The Wasp (waving): “Well! I’m sorry my young friends! I wish you all the best of luck! Goodbye!”

All were magically expelled save Bumble. They found themselves teleported to the overgrown front porch of the Wasp’s cottage. The front door was behind them and shut tight. They could hear multiple locks locking and bolts thrown on the other side. Then they heard the Wasp excoriating his young pupil at the top of his lungs.

The young mages decided to gather their wits over some ale at the Red Helm and so made it straight for the tavern. They met back up with Excor and noticed shortly after reaching the West Quarter that they were being followed.  A small group of thugs and rogues that was being led by the Bronzehead they had waylaid a week ago (see The Cabal of Eight Pt.6: Gold Devil & Pt.7: A Red Rat) was directly behind them. There were also a few red imps in the air trialing them staying hid near the tops of the buildings. Luckily, neither group seemed aware of the other.

Isis: “Oh man! Oh man! This is making me nervous! I mean this is SO suspenseful!”