The group had traveled with no incident from the city of Ezmer. The train of two wagons and 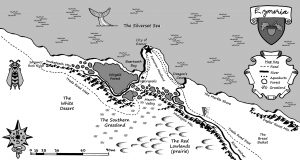 carriage rolled along the Trade Road West out of the Ezmerian Headland. Under the experienced guide of Arcan the Wanderer, they were seeking the Black Pillars. All the while Excor (played by Cris) kept his eyes peeled for any shenanigans coming from the Wasp.

Cris (to the other players): “All of us, each of us, need to make spot checks constantly on the Wasp.”

Their first stop was within a few miles of the Necropolis. A driver was killed during the night, torn apart by some animal. The footprints into camp and around the corpse resembled a lion. However, Fauna (played by Jenn) couldn’t identify the creature though it seemed similar to a lion it had walked two feet as much as four. Unlike a lion it had not killed to eat, it seemed to have just killed the man then left the campsite. They buried the mutilated body after breakfast. Arcan took some time to get his bearings in guiding the adventuring party to the pass into the Mezrin Valley.

Around noon, they stopped the caravan to allow the horses to rest. As they munched on their rations, Xanto the Wasp regaled Belrae and Riahm with tales of his adventures. The thin villain claimed that he had slain a dragon rescuing his companions, a gaggle of sloppy, blundering dragonslayers in the process. Excor and Fauna shot him suspicious narrow-eyed glances. Soon enough the caravan moved on along the narrow path south.

Mountains rose to the immediate west and dense clumps of trees and thickets began to multiply in the distance. A few miles northeast snaked the Dragon’s Tail River. The road was a mix of yellow and white with large patches of mundane earth brown. The wagons came to a stop at Arcan’s signal. It was again time to camp.

On first watch, a scorpion stung a footman and on the second, a thunderstorm moved in dumping hot rain onto the brave adventurers. At first, the rain released the sweet scent of the prairie from the arid soil. It was fresh, a mix of rich clay and the mild reek of straw and yellowed grass. However, shortly after their departure, the desert freshness was gone and the atmosphere in the carriage cab was stifling. Thunder rumbled in the distance.

Trees, yellow and scrub pine, approached the road in clumps and patches. After a few hours, they began to encroach upon the road itself and soon the travelers were rolling through a thin wood. Shortly after they spaces between trees again began to increase and sun drenched glades started to break the wood apart more and more frequently. Another day passed as they traveled on. When they broke through the last clump of trees The mountains and low hills were close poised on either side of the road .  It was the pass into the valley.

Arcan guided the wagons slowly and carefully off the bend of the trade road as it turned west. The terrain flattened out though high purple mountains could be seen to the north and west with a distant ridge of hills rising in the south. The ground became lush with long pale green grass. Soon they surrounded on all sides by the tall grass. When they stood to see over the tops of the blades, they saw a seemingly endless shimmering sea of pale green. Arcan found a small clearing approved by Fauna for their campsite.

During the night, a pack of four dragonsauri attacked the camp during Gornix’s (played by Gil) and Szoo’s (played by Isis) watch. The mages managed to kill two while the other two were spooked away. They only lost a single footman who was dragged away by an unseen fifth during the fray. The only trace left of him, a long ragged red trail of blood leading deep into the tall grasses. Belrae had been wounded but healed himself after.

Morning. Arcan said he estimated about a day or two through the tall grasses when asked by Excor how much further the Red Waste was. The billabongs and hidden mires aside from the dragonsauri would be the worst risks now.

By around 3 pm they broke the grass and a light hot rain started as they rode out onto the Red Waste. The drizzle awakened an alien scent, a bitter smell with only the scant metallic hint of dead soil underneath it. Before them sprawled the Red Lowlands in every direction.  It seemed lusher with the harsh and fibrous flora of the desert than would be hinted at by the name the Red Waste. The sand was not even that red being more of a rocky reddish brown. Arcan assured them that the red waste was closer to the center of the Red Lowlands.

Arcan the Wanderer: “You’ll know when we’re within it. It’s unmistakable.”

The great purple moon appeared on the horizon as the sun slowly melted into an orange and red sea in the West. The ever-diminishing Wuhzigvir Mountains were sinking into the eastern horizon. Excor and Arcan were on the lead wagon along with a crossbowman and a footman. The carriage following the lead contained the cabal along with a driver and a crossbowman. Bringing up the rear the last heavily laden supply wagon had a crossbowman, driver, and the last of the footmen. The adventurers were shouting back and forth while the wagons slowed about where to set camp when a giant winged silhouette swooped out of the purpling blue of evening. It was a dragon.

The creature swooped down and blasted the last wagon with its fiery breath killing the horses and all aboard. The remaining drivers and Arcan spurred their horses on hoping in vain to try to outrun the dragon.The dragon had bronze colored scales and glowing jewel-like eyes, it was a Wher.

Fauna readied a spell in case the dragon should target the carriage. Excor pulled his Lightning Spike and activated his Jet Amulet of Shield. Gornix cast Amplify Magic on the dragon successfully enchanting the creature despite its resistance. The carriage driver spurred his horses on and turned away from the lead wagon. The wher swooped in again with its gnarled claws at the lead horse on the last supply wagon. Arcan tried to drive the animal to avoid the dragon’s talons but failed. It got the horse. He was able to maintain control of the wagon. Szoo cast Elemental Half-Plate Armor (Fire) on himself.

Fauna cast Wind Rush at the dragon to try to push it to the ground but it had no effect. Excor shot a bolt of electricity from his spike also without effect. Gornix cast Force Ram nailing the dragon badly injuring it. The Wher unleashed its breath at eh carriage but Szoo was able to divert the draconic flames harmlessly away. Arcan tried to turn the supply wagon in a directin directly opposite the carriage but instead flipped the wagon and crashed throwing him and Excor to the ground. The footman and crossbowman were killed.

The rough ride as the driver tried to outrun the dragon caused Gornix to fail in casting another spell. The wher with a mighty flap of its wings landed with a crash onto the roof of the carriage. Its claws pierced the ceiling visible from the inside of the cab. Gornix cast Force Ram through his wizard’s staff. He tapped the creature’s side as he leaned form a window crushing its ribs. They heard a sickening sound like a water-filled drum hit with a sledgehammer.

The dragon used its tail to batter at the carriage door causing splinters to fly but the wood held.

Excor stood up and dusted himself off. He survived the crash without injury due to his shield amulet. The carriage was a few hundred feet away. Gornix again channeled the same spell through his wizard’s staff but the dragon was able to resist his magic this time around. Distracted by the chaos of the fight Fauna found it impossible to cast Lightning Bolt. However, Szoo summoned his flaming naginata and dealt the deathblow causing the creature to unlatch its claws from the roof of the carriage and lurch into the air before it came crashing back down.

The carriage came to a stop and Gornix immediately jumped out. Fauna followed and they both raced to “harvest” the dragon’s corpse. Szoo saw that the Wasp had been gripping a medallion under his robes and had one of Bumble’s hands clasped tight. When he let go of the medallion Szoo could see that its gem seemed to be amber that contained a piece of what looked like mushroom.

Bumble ordered the driver to circle around and scoop up any crash survivors. Meanwhile Excor and Arcan inspected the wreck. One horse was fine. They gathered some essential supplies and waited for the carriage. Arcan was dirty and bloody but his wounds were mostly superficial. After an hour, the group left in search of a safe campsite far enough away from the dragon-corpse to avoid monstrous scavengers. Szoo bummed a jar of Hill-lander whiskey from Gornix so he could preserve the Wher eye he had cut out.

Come morning they left their campsite and a few more of their number behind after breakfast. They were now short of supplies, especially water, but were close to their goal. Arcan had wedged himself between the driver and the crossbowman.

The land had become increasingly desolate as they traveled on at an alarming rate. Any vegetation seemed to recede and shrivel away to nothing. Before they knew it, the land was flat and mostly barren save for the numerous rocks and gravel of varying size. The earth here was as red as blood. At the advice of Arcan they made a wide berth around a large and dense area of woody bushes that were very out of place against the barren prairieland. By evening, they could see the Black Pillars in the distance. Fauna cast Commune with Nature. In the direction of the Black Pillars, her spell was blocked.

With one more day of travel to go they set camp and settled in for the night.