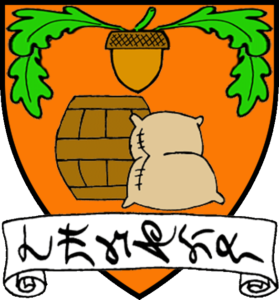 Eight with her news. Her father had conducted a dinner with the Black Knight/White Swan Sir Illin. She liked him; he was very nice and charming. The players all shrugged they actually liked him too.

Her father also had a closed door meeting with her master, the Wasp for some reason. She wasn’t able to listen in and her master has been tight lipped about it. She didn’t dare ask her father about it.

Her father, Baerox, also had a strange and tense meeting with another fellow just a day ago as well. The man was a half-naga in disguise. He appeared as a generic Ezmerian merchant or shopkeep. However, she was able to discern that he was cloaked in illusion. So, using a special hand lens she had lifted from her master’s desk when he wasn’t paying attention.

The stranger was a half-naga with black and red scales over his face. He had a pair of curved daggers with bejeweled pommels on his hips and a black cloak over his shoulders. Around his neck, he had a pet cobra! She was sure money exchanged hands from her father to the stranger’s purse.

Riahm, the bard, cut in and began to relay the information he was barely able to keep in as Bumble stumbled about. The seeker and curator that had led the expedition that he and Belrae had joined went missing about three days ago. The scout that had led the expedition was long gone and even then, he didn’t speak the Westlander tongue. This intriguing bit of information convinced the group that they have to move as quickly as possible.

The group began planning their trip and assigning roles to each. Gornix (played by Gil), the Salt Lotus Wizard, turned to Ilna.

Gornix: “You know you need to keep everything in these cabal meetings secret, right?”

Bumble: “Oh yeah. Of course everything in the Cabal is secret. Uhm. But I did tell my master about how you guys killed that devil summoner. He was very impressed.”

She smiled at Gornix, the players face-palmed.

Excor (played by Cris) extracted a diamond and a sapphire from the group stash hidden in the room to Bumble for her to procure a carriage, wagon, and supplies. She told him that she was sure her father would cut her a good deal.

Just before Belrae adjourned the meeting, the Cabal agreed to gather at the city gates on the 25th of High Summer, four days hence. The group rose from their seats. Riahm decided it was a good idea to accompany Bumble on her mission to get supplies and transpo. The mages filtered down in tote h tavern save Excor and Gornix. The pair had decided to plan which spells to exchange and study over the next four days before they left.

Szoosha (played by Isis), the black-scale naga fire elementalist, decided to just go back home. Fauna (played by Jenn) the druid decided to stay behind and sling a few down. It wasn’t long circulating amongst the rabble that Fauna spotted an interesting character loping into the taproom.

The man was wrapped in badly worn robes and shedding red dust as his leather boots, stained yellow form the road, plodded along the floorboards. A leather thong served as a belt with a simple dagger in a wooden scabbard tucked under it. His skin was burnt dark by the sun and his features cracked and chiseled by experience. She was able to make out a symbol on his robe that she didn’t recognize. Therefore, she decided to memorize it for later. He reminded her of some sort of shabby cleric or priest.

The stranger went up to the bar and Fauna immediately strolled up and paid for his drink. She found out that he was a “wanderer of the waste and deserts”. When he spoke, she could hear a slight Southland accent. Of course, she asked after the Red Waste and found to her delight that he indeed “knew it well”. It wasn’t long after getting his name, Arcan the Wanderer, that she had hired him for 8 gp a day to guide the Cabal to the Black Pillars in the Red Waste. She looked forward to seeing him at the city gates in four days.

The next day, while Gornix and Excor copied spells into their books, Fauna went back to the Black Barrel Tavern in the harbor district. There she found her “connect” and purchased 5 doses of Yellow Lotus for 2 sapphires and 500 gp.

Cris: “Sheesh! That’s expensive! You can just go to my contact, Babia.”

Jenn: “I thought she was out!”

Cris: “Oh yeah, I bought the last of her stuff this last time.”

As she left, one of the Bronzehead bodyguards seemed to recognize her but didn’t bother to say or do anything. Meanwhile Szoo went to the city bazaar and picked up some rope, a month’s rations, and at Gornix’s request, a cask of ale.

Later that afternoon Fauna met up with Szoo at Wensaer’s Alchemy Shop. They purchased 10 smoke bombs for 100 gp. Szoo bought 3 healing potions for 2 sapphires and 100 gp. Finally, Fauna bought 1 potion of Disguise. The druid went back to the bazaar to pick up some insect netting.

By evening, the pair were back at the house in the North Quarter. Szoo and the druid decided to smoke some Yellow Lotus in the courtyard, which Fauna referred to as “the garden”. Consequently Szoo was knocked out by the drug and suffered a strange vision. She dreamt of an old wizard with weird eyes that cast a spell trapping a golden bee in a piece of amber. Not long after Szoo went unconscious, Gornix and Excor took a “lotus break” as well.

The following day Excor purchased an arming doublet for himself and Gornix decided to hunt down his contact in the Pesters’ Guild, Doubab. Eventually he caught up with Doubab at the Rum Palace (see The Cabal of Eight Pt. 20: Rats, Rowdies, & Imps). After having a “talk” with the rat-catcher in “a very quiet place” that accomplished nothing, the Salt-Lotus Wizard left. He wanted to look for a fighters’ guild so he could hire more bodyguards.

While on his way along the main drag heading south to the South Market District, he spotted a group of checkered knights and leading them? The White Swan accompanied by a Hyvalian paladin. He immediately ducked behind a corner and went invisible. He waited where he was as they passed and overheard something about Creschan Fire. Just as they passed, he also heard Sir Illin, the Black Knight/White Swan, mentioned that the White Knight/Black Swan was hunting down some mage-assassins in the city.

The morning of the 24th of High Summer – Excor decided to hire a courier to deliver a message, written the night before, to Sir Illin. It read: The people you seek work for Virtra. – Signed a Friend.

Cris: “There. Now they’ll be looking for her. Hopefully it’ll buy us some time while we get out of here.”

On their way to the main gate, the mages stopped by the cabal room to retrieve the amber bee. They had hidden it there for safekeeping. Eventually they got close enough to catch a view of their expedition’s caravan. There were two supply wagons and a carriage. All marked with the Nezorik family arms.

There were a few footmen, a driver and a crossbowman on each wagon and among them a familiar warhorse. They ducked as soon as they saw the Black Knight mount it. The mages held up behind the corner of a building for many tense minutes. They had no idea what to do. Suddenly, a messenger jogged by, a sealed letter in his teeth.

Hence Excor peeked around the corner and watched the runner make a beeline right to Sir Illin. Suddenly the Knight tore off at full gallop as a result of reading the note. The young mages mashed themselves against the wall trying to stay as hidden as possible as he charged by.

The group ran to the carriage. There they met up with the other members of the Cabal. Ilna told them how her father gave them a full load of provisions and plenty of water and ale as well as a few troops and drivers. The mages finally let out a breath of relief. Almost as a result of their ease the carriage door opened and out popped Xanto the Wasp in his yellow and black stripped glory.

Xanto (his arms stretched open above his head): “Ah! My friends, dear friends! Are you ready for adventure this will be such an adventure! But never fear I am here!”

Bumble: “My father said he had to come to keep watch over me. But you guys said it was okay already right?”

The players rolled their eyes and let out a collective groan.