The corpses of a sailor and hill-giant blocked the narrow alleyway that led to Fauna’s rental. A few 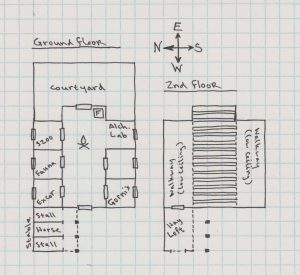 of Gornix’s bodyguards were starting to drag the corpses to the street. In the brief but brutal fight two bodyguards had been injured. Fauna found a note on the sailor along with 1,000 gold pieces. Finally, the mages were upset with Excor. During the fight he had simply walked away.

Cris: “What!? I knew you guys could handle it. None of you are even hurt!”

Gornix: “Oh yeah what about my bodyguards? Those guys are not cheap!”

The mages went into their separate rooms. Fauna settled in the main room at a small table. She studied Haxat’s notes by candlelight late into the night.

The following afternoon Szoosha accompanied by two of his guards walked to the tailor shop that had sold him his cloak. The black scale naga was clothes shopping. He spent almost an hour in the shop but couldn’t find anything to his liking even considering a pair of breeches or even silk slippers.

Jenn: “Um aren’t you a snake person? Half snake?”

After he was finished looking around, he was hoping that by chance he might run into Virtra Wefa, he walked out the door. Both guards were gone. A little miffed and with paranoia stroking his scaly neck, Szoo turned to a vagrant in a dirty robe face covered in long yellowed white hair.

Vagrant (pointing at a nearby alley): “They went into that alley.”

Vagrant: “A little guy in black stole something from one and they both chased him into the alley.”

With that, Szoo rushed up to the entrance into the alleyway. However being of a slightly nervous disposition he flattened himself suddenly against an adjacent wall and peeked around the corner. Lying in the alley on the ground were the two guards, dead, with their throats cut.

Szoo jerked his head to the beggar but saw only a fake white beard lying on the ground right next to where he was. Because of that, the naga beat it back to the house. He was in such a panic that he did not take into account that the potential assassin was following.

Cris: “Now he knows where we live!”

The group secured the house the best they could. Gornix posted two guards inside at the entrance, two in the main room, and one at the inside back door. The back door led to a small-enclosed courtyard that Fauna used as her room. They had to drag her into the house. She remained in the main room lying on an old couch that had come with the place.

The day passed into evening and then into late night. Fatigued the guards carried on with their duties. The mages continued their research, Fauna was growing bored, and Szoo was asleep, his window shutters firmly jammed shut with a dagger.

Fauna yawning turned to strike up a conversation with the guard at the back door. However, he wasn’t there. Instinctively she looked down. There was his body lying in a pool of blood, a shuriken lodged in his neck.

The lead guard immediately knocked on Gornix’s door asking for him by name. The Lotus Wizard opened it and the guard apprised him of the situation. The guards had gathered in the main room and were searching the rafters and the darkness beyond with their eyes. Their agitated spears were ready to thrust at the slightest movement. After the Westlander style, the rafters were exposed with a walkway above the bedrooms.

Gornix joined his men. Excor remained in his room but was prepared to “blast the f@c#in’ door” if anyone should try to get in. He had also jammed his bedroom shutters with a dagger. Fauna was standing at the ready next to Gornix and his guards. Szoo readied himself should anyone or anything try to break his door in.

Fauna spotted a small black shadow darting about above them.

The guards blindly jabbed with their spears but hit nothing. A blade whistled through the air and hit a guard in the throat. Arterial blood sprayed over the floorboards as he fell dead.

Gornix cast Illuminate through his staff creating a makeshift arcane spotlight. For only a moment they all spotted a small black clad ratling caught in the light.

Cris (beginning with a sound of disgust): “A moon rat! Great.” A Moon Rat is a ninja variant for ratlings in the Arvan setting.

The mage led the demoralized guards up a stepladder to the walkway above the rafters. The ratling assassin engaged one guard and wounded him badly with its razor sharp sword. It quickly retreated out onto the rafters as the guards tried to stick it with their spears. Gornix bided his time hoping to cast the fight-ending spell but he was also having a hard time keeping an eye on the quick and elusive creature.

The ratling soon realized that it had been a mistake to retreat to the rafters as the guards’ spears had the reach to make his position a disadvantage. As a guard began to shakily step onto a narrow rafter against Excor’s advice, he somersaulted over their heads towards the hayloft door at the front of the house at the end of the guard-populated walkway.

The assassin immediately ducked through the door and into the hayloft above the stable. The guards immediately followed as did Gornix. As soon as he got a clear-shot Gornix cast Inferior Fireball at the moon rat but it easily avoided any damage. The guards leapt down to the stables floor from the hayloft and pursued the ratling into the alley, out into the street, and out of view.

Gornix just shrugged and went back to his room to continue his research. Fauna went to check on Szoo who eventually let her into his room.

After almost half an hour there was a knocking on Gornix’s door. He immediately stopped what he was doing. Whoever it was hadn’t called for him by name as the guards had. Gornix then asked “who’s there” but was met with silence. Therefore, he readied a spell and opened the lock.

The door burst open and the ratling charged over the threshold. Gornix cast his spell just in time. Black ribbons of shadow energy snagged and entangled the little killer. Its sword on the floor, the curved blade oiled with a strange substance, poison.

Cris: “Another guard! They’re all dead.”

It chittered angrily at the Lotus Wizard. Gornix tried to interrogate the creature but got nowhere fast. So he cast Spook to try to loosen the ratling’s lips a little. In response, it had turned its ring that concealed a poisoned needle into its palm and squeezed. It was dead in seconds.

The mages gathered in the main room and tried to “strategize”. After several minutes of bickering Gornix got fed up and asked Fauna for the note she took off the sailor’s body the night before. She handed him the scrap of paper. On it was descriptions and names, their names and their descriptions. He cast Clairvoyance on the note and knew immediately who wrote it.

Excor just shrugged and started walking back to his room. Just before he shut and locked his door to continue his arcane research he said, “We’ll get our throats cut when we sleep”.

Isis: “What!? I’m not coming out of my room until morning!”

Undaunted Fauna went out to the stables, cast Communicate with Animals, and told the horse and then her chickens in the courtyard, to let her know when “anyone’s around”. The rest of the night passed quietly enough however.

Over the next five days the group brewed potions, researched, and Excor tended the fighting rats. Eventually the time for the next cabal meeting arrived.