Excor (played by Cris) cut Jirek’s bindings. The young scribe was visibly in shock. He stared blankly as his rescuers fell 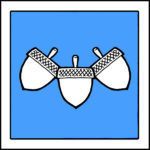 upon the gory remains of Haxat’s corpse looting anything that appeared valuable or that they recognized as magic. Afterwards, the young mages decided to take their loot back to the cabal room and properly identify and divvy it up. Jirek, traumatized, decided to stay behind in order to “clean up” and assess the damage to his warehouse.

Later in the cabal room in the upper floor of the Red Helm tavern, the young mages commence to inspect and identify their booty. What they had was: a polished red agate necklace (level 1, Shield, 1/day), a silver ring (Level 2, close wounds 3 x day), a gold ring with turquoise (Level 4, circle of protection I), and a gold ring with a large ruby (Level 8, scry, 3/day; scry image appears in the ruby).  They also had a set of purple robes (Level 6, grants a Damage Reduction of 12), a High Quality light silver longsword, and a high quality alchemical-gold dagger with a curved-blade and black enameling with an emerald pommel stone. They also came away with 2 potions of healing: a potion of Dispel Curse, and a potion of Impervious to Energy (Frost).

Gornix (played by Gil) took possession of the robes. Fauna (played by Jenn) took the necklace. Szoosha (played by Isis) took the silver ring. Excor claimed the gold & turquoise ring. As the characters had some left over items after the even split the players decided to have a roll-off for the remainders between those who wanted them. Cris and Isis rolled-off for the Dagger, which Isis won. Cris and Gil had a roll-off for the sword; Gil won but let Excor have it. The gold & ruby ring went to the group hoard hidden behind the false brick in the fireplace (see The Cabal of Eight Pt.16: Fight for Sleep).

After this acquirement phase concluded, their attentions turned towards Haxat’s spell book. They were careful not to directly touch the book itself as its leather cover bore a magic ward and it had an iron latch with a small key lock as well. Excor identified the mark as the Burning Symbol. If anyone besides Haxat touches the book, the ward and book would burst into flames burning the hands of the interloper. Gornix just decided to “go for it”. Therefore, Excor handed him a small key he had fished from the purple robes when he had first “salvaged” them. Gornix positioned the book on the table using the sack to cover his hand, inserted and twisted the key, and then opened it. The ward flared as he touched the book but his new robes granted him full protection against the flames.

Within Haxat’s spell-book, they discovered 12 spells and 2 potion formulae. The spells were, in no particular order: Inferior Fireball, Cone of Fire, Imp Summoning Circle, Pain, Bolt of Stunning, Blur, Burning Symbol, Mass Pain, Shield, Slow, Close Wounds, and Ring of Blades. The potion formulae were for Blur and See All.

After the group decided that Szoo should take the Impervious to Frost potion and Fauna the Dispel Curse potion Szoo got up to go grab a round of celebratory ales. Excor tossed him some silver. While the naga was downstairs the remaining three stashed the papers (Haxat’s notes on the Gold & Amber Bee; seemed he was looking for a hive and wanted the queen) and the Amber Bee with their other treasure behind the false brick.

Suddenly Szoo rushed back into the clubroom frantic.

Szoo: “That guy in the BLUE ROBES was watching ME! He’s downstairs RIGHT NOW!”

Excor (bluffing humorously): “Well Naga, sounds like the sapphire guild is after you because you’re a Black Scale! Ha …”

Szoo believing him immediately ran away home in a state of utter panic. After that incident, the others checked downstairs for the “blue-robed guy” before calling it a day and going their separate ways.

Fauna was retreating to her spot in the grove (essentially Ezmer’s Central Park) when, while passing through the Old Market District, she spied a woman she recognized as her cult leader entering a high-end dress shop. Of course, Fauna decided to follow ducking into the very same shop just behind her quarry. The woman tried to deny that they knew each other but eventually relented when it became apparent Fauna was not backing down and willing to make a scene.

After some extended awkwardness, she learned the woman’s true name, Virtra Wefa, and eventually spilled the beans about “her friends dealing some justice to a demon summoner”. As a result, Virtra invited Fauna and her friends to a dinner at her residence in the Western Cliffs District the following night (the 24th of Early Summer). After the invite, Virtra had an accompanying footman boot the young druid from the store. Fauna continued on to the park with a big smile on her face.

Later that evening Excor dropped by Gornix’s apartment. It took very little convincing to get the salt-lotus wizard to take a break from his spell research to accompany the other to the meeting with Doubab at the Red Helm.

Meanwhile Szoosha was slowly learning to read going through dozens of old water-damaged ships’ logs and manifests piled in the corner of his flat by his roommate Paej. Most likely a resource kept by the Ferenoi to sell for the paper when in need of some scratch.

Later on in the evening at the Red Helm, Gornix and Excor met up with Doubab. They sat in a curtained booth against the wall that separated the theater from the rest of the tavern. They began with small talk, Excor asked where the “goods” were, and Doubab punched the squirming sack he had set on the seat. Gornix however was getting bored so he offered to fetch a bottle of “something good” from the bar.

On his way to the bar, Gornix spotted the mage in powder blue robes. For the moment, Gornix feigned disinterest. However from the corner of his eye he noticed that the blue-robe was eye-balling him. He bought a bottle of Hill-Lander whiskey from the bartender. Then told him to send a barmaid to the booth to serve them. He tossed a silver piece on the ale-soaked board and returned to the booth.

A few minutes later, the server hobbled up to their table and introduced herself as Stranez. She was a half-faun southern nomad woman with messy coarse grey hair over most of her body. Excor butted in. He paid to send a bottle of “decent quality but not too expensive” wine to the blue robe’s table. He offered a gold bit should she return with his name. They soon learned their stalker was one Crochi Aengham. He was a seeker for the Star Sapphire Confraternity (the sapphire mage guild).

Excor also paid her to go back to the seeker and “keep him busy while they talked business”. She tried, half-heartedly, but the seeker wasn’t having it, old Stranez had seen better days (see The Dragonslayers II Pt. 9). She had done so mostly for her own entertainment. Besides she managed to lift the man’s purse before she limped back to her job.

Meanwhile Excor and Gornix paid Doubab for the bag of rats. The ratter was their “rat hookup” and a possible ringer when it came to betting on the rat fights. He was also well informed as to when and where the fights were held. After a few minutes, Gornix got antsy and decided to approach the seeker. So, Excor and Doubab retreated to the theater. There they drank and listened to the performer, a young minstrel fresh from the bardic college. He was singing a rendition of the Dragon-Wars epic poem, very badly.

Gornix sat down at the table with Crochi the blue robed mage and introduced himself. The sapphire guild seeker was not amused especially when Gornix went on about “a good business opportunity”. The salt-lotus wizard began talking about how he and his comrades were looking for investors for their soon to be operational rat-fighting outfit.

Crochi (in disbelief): “Wait. Are you telling me that you guys are rat-fighters?”

Gornix (shrugging as if it were obvious): “Well, yeah! And we need money… investors.”

Crochi (he finished off a small glass of fine red wine): “You and your companions are nothing more than rat fighters. Bunch a’ gutter-mages. Well-then…”

Crochi (getting up to leave): “Well, what a waste of mine and the guild’s time. We’ve been watching you and your friends for nothing.”

He motioned to a city guard posted at the entrance that they were to leave.

Inexplicably Gornix kept following him on his way to the door then shouted something to the effect that he and his friends are more than ratters “we defeated a demon summoner named Haxat”. That made the seeker turn around.

The next hour was spent at the bar conversing with Crochi. Of course, Gornix told him everything about the confrontation with Haxat that very afternoon. A messenger that Crochi had sent off just after his talk with Gornix had started returned and handed him a sealed scroll. With a grin, Crochi handed it to Gornix telling him that he and his companions were summoned to the Star Sapphire Confraternity’s guild house in Guildsman’s square for an “initial appearance before the guild court for a fact-finding session”. The scroll was a court summons for the following high noon.

Cris: “He thought we were just rat-fighters! He wasn’t going to pay any attention to us! That guild doesn’t care about the rat fights! We were FREE and CLEAR!”

After some justified belly aching from Excor, both Excor and Gornix took the sack of rats back to their respective apartments to transfer the rats from the bag to the cages. They lost quite a few rodents in the process. Soon they realized that their apartments and buildings would soon have a severe rat problem.