As splinters of wood sprayed into the dim, fire lit chamber the semi-transparent form of the red imp was thrown from 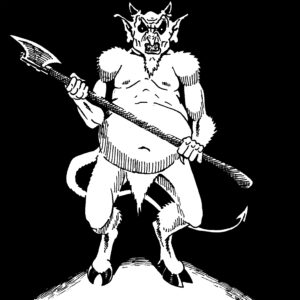 the remains of the shattered door.  Its diminishing screams continued to echo as it fell back down into hell. Gornix’s new spell, Force Ram, had smashed down the imp-possessed door and laid open the basement of the small warehouse to the cabal of young mages.

Open flame torches and a pulsing venomous red light sparsely lit the dark basement. It was a rectangular chamber studded with many wood studs supporting the plank floor above. The cabal mages were at the entrance in a far corner and their target, Haxat the demon-summoner, was at the opposite corner next to a desk. Their ally, Young Jirek, tied to the chair next to him. Around them four small winged imps whom immediately went invisible.

Dressed in fine purple robes, rings aglitter on his fingers, and a gold and red agate necklace around his neck Haxat the demon-summoner had shiny blood red skin. His long oiled hair and beard were coal-black.

Suddenly the evil red light grew in brightness then disappeared with a bloody flash leaving behind a tall wingless imp its eyes burning in its sockets like orange embers burning in bleeding flesh. In its twisted clawed hands it wielded a long-handled battle-ax.

Excor and Fauna readied to charge into the fray spells blazing. Gornix moved inside and to the side casting Illuminate fully revealing the big imp and the rest of the room. Excor moved in after shooting a bolt of electricity at a suddenly visible imp as it made a flying kick at Gornix’s face wounding it. Fauna moved in but the wrack on her nerves caused her to flub her Lightning Bolt. Another imp appeared also kicking at Gornix’s head but missed. Haxat grabbed his red agate necklace activating Shield. Suddenly from the dark of the ceiling, two vipers dropped onto Excor, one striking but hitting his Shield dispersing it immediately. The second missed and hit the floor. Both reverted to their imp forms. The big imp missed Gornix with its ax. Szoo produced his fire naginata and struck the axe-wielding imp etching a neat rut in its vile hide.

Excor shot another electrical bolt at an imp but the imp jerked out of the way at the last instant. Gornix cast Chrono-Missile at the big imp injuring it. The first imp kicked again at Gornix but he parried its hoof easily with his staff. The second imp missed Szoo’s head as it too kicked. Fauna threw a Lightning Bolt at the first imp gravely wounding it. Haxat cast Mass Pain but all of the young mages were able to resist his evil magic. Imp number three sank its pointed teeth into Excor’s shoulder. The fourth exhaled his fiery breath catching all of the mages in the area of effect but Szoo was able to divert the flames around them blackening the wooden support beams surrounding them. The floor above groaned painfully.

Excor cast Spook on the third imp who backed off and began to retreat towards the feet of its master, Haxat. The second imp made another kick to Gornix’s head nailing him. A trickle of blood ran down his forehead. Haxat hurled another small fire ball this time aimed at Szoo whom easily diverted it harmlessly away to crash into and scorch a brick wall. Gornix cast Ghost Form on himself as a precautionary measure. Fauna tried to lob a Lightning Bolt at imp number two but failed to get the spell off in the turmoil of battle. The fourth imp, who was still on the ground at Excor’s feet, went to kick the young mage in the shin but was parried. The big imp raised its axe over its head for the second time and hacked into Szoo’s flesh.

Excor stepped back from imp four and summoned three medium-sized earth elementals but was unable to control them. The first of the elementals slammed Excor significantly wounding him. The second stomped imp three horribly injuring it as it fled and the third punted the imp that was at Excor’s feet nearly killing it. Imp number two kicked at Gornix yet again its evil hoof passing harmlessly through his ghostly form. Haxat readied himself should a raging elemental approach, otherwise he was somewhat amused by the chaos. Gornix used his Dark Secret class ability on the Big Imp granting his companions a bonus to attack it. Szoo stabbed imp two drawing some blood with his fire naginata. Fauna tried to cast another Lightning Bolt at imp two and again failed. Imp number three ran under its master’s purple robes. The fourth imp’s kick had no effect on the third elemental.

As the earth-elementals were a greater danger to him and his allies, Gornix attempted to reverse the summoning spell but failed. Haxat’s mocking laughter rang from the basements stone walls. This bumbling bunch of wannabes only threatened him by way of their stupidity.

The big imp swung his axe at Szoo who easily parried the blow. Haxat crossed his arms and waited for the fools to do themselves in. Excor tried to reverse his summoning spell as he moved towards Haxat. He was unable to undo his own summoning. Szoo struck at the big imp. The naginata blade deflected by the axe. Gornix tried to cast an inverse summoning spell to undo Excor’s summoning but the magic got away from him going wild resulting in a blinding magical explosion. Szoo and Fauna tried to dodge the blast, failed, and were nearly killed. Both forced to make recovery checks to stay conscious. Gornix being at the epicenter was unharmed as was Excor, Haxat and his imp.

Shocked by the explosion and seeing that the earth elementals were following Excor towards him, Haxat began sweeping his papers and notes from the desk into a sack. Fauna cast Wizard’s Trick on Haxat in an attempt to reduce him to a “chicken” but the spell was stopped by the Shield spell protecting the evil mage. Gornix was finally able to reverse Excor’s summoning and the elementals instantly melted into the dirt floor of the chamber. Excor moved closer to where Jirek was tied. Imp number three lurched from his position near his master and spewed fire at Excor who was miraculously able to avoid the sulfurous flames completely. The flames had completely missed Jirek.

Haxat swept the last of his notes into his bag. Fauna tried the same trick but again it met another Shield spell. Gornix charged up towards Haxat and cast Chrono-Missile. The missiles of which dissipated harmlessly as they hit the purple robes one after the other. Excor slipped behind Jirek and pulled his dagger ready to cut his comrade’s bonds. After collecting his wits, Szoo slithered closer to the blood-skinned wizard.

As a result, Haxat let loose a cone of fire from his hands catching only Fauna in the flames. It stopped her dead in her tracks and forcing her to make a recovery check in order to “not die”. Gornix within range of his new spell cast Force Ram crushing Haxat against the brick cellar wall. Caught completely by surprise (Natural 1 dodge) and all of his Shield spells spent he had been helpless. A shocked silence followed the sickening crunch of bones and squishing of organs. Finally the third imp disappeared in a reeking puff of flame and brimstone.

All that was left of Haxat the Greater self-proclaimed menace of Skullhead was a puddle of squashed meat and blood, lots of blood.

Cris: “What about those robes?”

His robes were apparently intact but soaked in gore with large chunks of mutilated flesh ground into the enchanted fabric.

Cris: “Ughk. I pick ‘em up … Carefully! And cast Prestidigitation to clean ‘em and put ‘em in my pack. Oh and I uh, cut Jirek’s bonds.”