The Underlings, after a confusing and circuitous route, led the young mages to the goal. They were in a 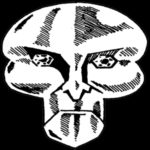 large sewer tunnel on a narrow walkway above a flowing river of filth. They showed the mages a small hole bored through the slimy brick and mortar wall. Beneath was a thick oak double-door its bronze hardware severely corroded. Fortunately the ratlings had also tunneled through the moldy wood.

The mages also noticed a bricked up archway in the same sewer wall about 5 feet over. Shrugging all climbed through the ratlings’ hole. Beyond was a 10 ft. wide hall. It was damp and smelled of a strange mixture of foul sewer gas and a dry mustiness. Offset from each other and along either of the western and eastern walls were verdigris covered bronze faces with gaping mouths from which orifices dangled spider-webs and streams of slime dripped.

The bronze faces were a stylized representation of a human (the mages hoped) with a strangely blank, stony expression. Ahead of the group at the other end of the hallway was a set of bronze double-doors scaly with green corrosion and each with the same strange face on it though the mouths closed into a straight stern line and fist-sized diamonds set in the eye sockets. However, the face on the left door was missing one of its precious eyes. The damage on the old bronze was obviously new. As a result of the mages noticing this, the ratling leader felt the need to speak.

Dusk (the ratling gang-leader): “One of ours did that. He tried to pry the gem. It’s just cut glass filled with acid. It broke and destroyed one of his arms. Leave the gems alone.”

Excor (to Dusk): “You SURE there’s no traps here?”

Dusk: “Oh yeah, don’t touch the door, a lightning bolt killed another of ours.”

Cris (Excor’s Player)(in a mocking tone directed at me the GM): “Oh yeah, huh? Forgot to tell us about THAT huh!? Yeah I bet damned little ratling.”

So, the mages carefully studied the doors. They were airtight, and shut-tight with no evidence of any locking mechanism. However, they did find an inscription on each of the doors that read:

Often silent, sometimes gentle, and others a hurricane, cities fall to me and only I can open these doors.

Of course, they easily solved the riddle. Athfonia (played by Perla) cast Wind Rush blowing the doors open. It was as the group began to move over the threshold that Excor remembered that he was still badly wounded from the previous two skirmishes. Consequently, he took the center position within their group formation.

Gornix (played by Gil): “Well that was easy.”

Cris: “It was supposed to be. Just keep a lookout. You never know what could happen!”

Szoosha the Black Scael Naga Fire Elementalist (played by Isis) conjured a flame into his palm for light since Excor had lit a torch. They moved into a small 10 by 10 chamber with an empty alcove in the north and eastern walls. In the west was narrow archway opening onto stone steps going down. The floor was a thick layer of dirt and dust possibly over stone. The room choked with dusty cobwebs that dangled from the domed ceiling.

The noses and eyes of all of the mages began to burn due to the swamp gas that had collected in the small room possibly over centuries. Suddenly, Szoo’s flame and Excor’s torch exploded with a blinding blast of flame.

Fortunately, no one was injured perhaps though slightly singed. They waited for a few seconds and sniffed at the air before relighting their lights. Meanwhile Gornix lit the crystal on his staff (the crystal being enchanted with the Torch Light cantrip) ‘just in case’. They elected Szoo to lead them for the time being. The naga’s Detection skill was the highest of the group, which wasn’t saying much. Needless to say Szoo was a bit reluctant.

Dusk (waving from the hallway): “Ha! Yer on yer own. We’ll wait for ya here for a couple a’ days before leaving!”

Cris: “No. If we don’t come back they’ll assume we’re dead and they won’t come down and check.”

After some prodding Szoo reluctantly began to lead the group down the long case of stone steps that sank down into darkness. The room that dimly unfolded before him had a 12 ft. high vaulted ceiling and four thick stone columns standing along its center. There were multiple empty wall niches and a thick netting of dirty spiders’ webs strewn over the whole drastically obscuring his vision. The room also stank strongly of sewer gas.

Isis (Szoo’s player)(referring to the spider webs): “I set them on FIRE! I like to BURN things!”

So of course Szoo threw fire at the cobwebs and not only did most of the webs in the room burst into intense blindingly bright flames but a pocket of sewer gas exploded as well. Szoo was slightly injured by the blast. Webs continued to veil the vaulted ceiling and the far corners of the room however.

The other mages moved into the room one at a time until all of them gathered at one end of the gallery. They slowly began to move forward to the other when Gornix spotted something and alerted the others. It was a large spider’s egg suspended and pulsating between the second and third pillars at about the center of the room.

Excor glanced at the niches in the walls nervously. All the while something in the webs above crept over them. Suddenly, a giant black spider dropped onto Szoo’s shoulders sinking its fangs into the naga mage’s scaly flesh. The spider’s venom paralyzed Szoosha as well injuring him.

Gornix cast Illuminate lighting up most of the room and revealing two more giant black spiders scuttling on the ceiling towards them. Athfonia cast Neutralize Poison on Szoosha in time to negate both the paralysis and the damaging effects of the venom. The third spider leapt at Gornix biting him injecting its paralyzing toxin into his bloodstream. The second spider leapt at Excor but failed critically falling to the floor injuring itself. Excor blasted the second spider with his copper spike further injuring it. The first spider grappled with Szoosha. Szoo tried to shape-shift out of the grapple but failed. Fauna cast Neutralize Poison on Gornix.

Gornix cast Chrono-Missile at number three. It tried to dodge but got hit anyway suffering moderate injury. The second spider flipped over and sank its black verminous fangs into Excor paralyzing him. The first spider maintained its grip on Szoo and tried to bite him but missed by a hair’s breadth. After that scare, Szoo was able, just barely, to break the grapple and throw the thing off of him.

Gornix let loose more chrono-missiles at number three horribly wounding it. In response, the creature spat webbing at the salt-lotus mage but missed. The second spider crawled onto Excor’s boneless body and number one spat webs at Szoo fortunately also missing its target.

Gornix (using his Spell Slinger feat) cast more chrono-missiles at the third spider. Its verminous body bursting splattering custard-colored crud everywhere as a result.  Its black legs curled and it crumpled into a hideous black ball.

Gornix then cast Neutralize Poison on Excor. Fauna dropped her lantern and whipped her staff at the nearest spider. The staff flying from her hands to clatter into a niche. Spider number two grappled Excor as he tried to move. Spider number one tried to grapple with Szoo but failed to gain a grip. Szoo called forth his flaming naginata. Athfonia pierced the first spider’s abdomen with her spear. Excor tried desperately to break spider number two’s grip.

Cris: “Man, if that thing bites me one more time I’m dust!”

Gornix cast Chrono-Missile on number-two wounding it badly and drew his scimitar. Spider number-two tried to gain a grip in order to try to bite but failed (N1) and fell from Excor. Spider number-one bit Szoo after the naga failed to dodge paralyzing him with its venom his fire weapon fluttering out of existence. This caused Szoo to make a recovery roll to prevent from being killed by the damaging effects of the spider’s poison.

Finally Gornix stepped into the fray and slashed at the second spider hacking the already badly wounded spider in two with his sword. Athfonia lunged at the last spider with her spear impaling it through its abdomen killing it. She pulled her viscera greased spear from its still twitching corpse.

With the battle over Excor cast Neutralize Poison on Szoo and Close Wounds on himself. Athfonia cast Heal Other on both Excor and Szoosha. After first aid, their attentions turned towards the pulsating giant spiders’ egg still in the room. Surprisingly it hadn’t burst during the commotion of the fight. Apparently, it was not yet ready to hatch and release its swarm of deadly young spiders.

The rest of the group (collectively): “NO!”

Therefore, they left the egg unmolested and continued on with a somewhat disappointed Szoosha in the lead. The rest kept their eyes glued to the ceiling as they proceeded.