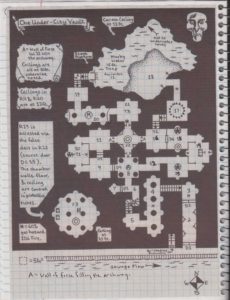 adjacent to the spider-gallery they had just survived. He burned away the cobwebs that choked this room as well to reveal a roughly 10 x 10 room, barren with a floor strewn with dirt. To the north was another stone staircase winding down.

The naga continued carefully down the steps and around a corner to come to a short hallway which turned west sharply just ahead. Excor (played by Cris) put his lit torch in the iron torch-loop set into the wall at the bottom of the steps before lighting another. There were spider webs covering the ceiling. Szoo set them on fire and after the flash fire a couple of hand sized spiders, burnt crispy, dropped to the floor.

Excor: “HEY! Let us know when you’re gonna do something like THAT!”

Shrugging, Szoosha continued ahead while the rest of the group tried to organize themselves. He saw an open archway to the north from which he could see a constant white light shining from beyond the chamber through it. He could also make out the backlit and squatting form at the center of the room ahead. As that did not move he looked to the west and saw a closed solid bronze door bearing the same strange face in relief at its center. This time the face had two opal eyes.

Having come to a fork in the road the group of young mages debated as to which way to go. The form that Szoo first saw in the other chamber was a kneeling behemoth of bronze plate-mail with a large spiked mace in one gauntlet and a standard flanged mace in the other. The mass of bronze was on one knee and was lacking a head. In place of the neck was a gaping hole rimmed with corrosion that also opened partway onto the chest.

Excor: “If we go that way that thing will get up and KILL us! It’s some kind of construct or golem or something weird. Our magic might not do anything to it!”

In a similar fashion, they discussed the bronze door to the west, whether to open it and/or pry loose the gems. In turns, they checked the door and trying to sense magic on it. None could get a solid read on it other than it lacked a lock. So they continued arguing about what to do for about a half an hour. Eventually a frustrated Szoo simply opened the door.

Finding that they had only one way left to go and perhaps emboldened by the extra healing juice they continued north. The chamber before them was about 15 feet by 15 feet with a thick round stone support pillar in each corner. To the west in this room was another bronze door with the same face save the glittering ruby eyes. In the east lay an open but dark passageway. To the north was an archway from behind which a brilliant light source blazed into their eyes. The source, a large blood-red ruby on a white marble pedestal.

Szoosha began to move past the squatting armor towards the brilliant archway. Suddenly, out of the corner of his eye he caught some movement from within the neck hollow. He leapt to the side. The thing that burbled and oozed from the corroded hollow appeared as a semi-gelatinous blob of blood red slime with several dark patches over it akin to scabs. It was a Red Ichor, a type of slime monster (see MMII).

Athfonia (played by Perla) readied her spear to jab at it if got close to her. Excor shot a bolt of lightning at it with the copper spike to some effect. Gornix cast Chrono-Missile dealing some damage to the strange creature. Fauna (played by Jenn) moved past the squatting armor hoping to be out of the ooze’s path. Szoo threw a blast of fire at it reducing it to a crystalized heap of granules.

Afterward, Excor looted the solid bronze maces with Szoo volunteering to carry one in his pack. Fauna wandered over to the archway. She saw runes carved into the greenish stone all around the edges. After a group-inspection they worked out a constant Wall of Force with no apparent way through filled the archway.

Through the impassible archway they could see their prize, the so-called Dungeon Heart only a few feet away. The chamber where the treasure rested was diamond shaped. Its floor, walls, and domed ceiling were constructed of a polished green marble. There were other archways possibly leading into it to the north, east, and south but in between these were large bronze reliefs of the same face with open, gaping mouths.

After some belly-aching, the group decided to inspect the bronze door in the west wall leaving the dark passage for another time. The door was the same as the previous doors save for the ruby eyes. It also visibly lacked any locking mechanisms but shut tight. It also seemed warded against any kind of magical attempts to see through it or “ghosting”. However, there was a riddle inscribed on it in Ivoran:

I consume all that I touch, without a mouth I roar, by my black touch only I may open this door.

Szoo solved it immediately and conjured some fire, touched the flame to the door, and it opened just as quickly. Szoo slithered into the dark room beyond. It instantly lit up with a magical light its source not readily apparent. The chamber walls, floor, and ceiling were covered in polished white marble tile. An empty wall niche laid to the south, to the north another bronze door, and in the west a narrow short hallway continued west with empty niches and an archway opening north lay at its end.

They inspected the bronze door recessed into the center north wall. It was solid bronze with the relief of the same face though this time with sapphire eyes. In addition, this door was also shut tight with no apparent locking mechanism. The riddle inscribed on it read thusly:

A proper guest knows how to open me.

So Gornix tried to talk to the door receiving no response. Excor used his Social Aptitude skill but to no avail. They stood there for a while trying to figure out the riddle. Still perplexed Gornix then tried to charm the door open. They were truly stumped this time.

The players sat there for a while scratching their heads until Cris excused himself from the table to go to the bathroom. Isis, Jenn, and Gil threw out a few wild guesses before falling into quiet contemplation.

Cris (on his way back to the table from the bathroom): “KNOCK on it! I KNOCK on the door!”

As a group, the young mages moved north into the newly revealed chamber. This chamber was very similar to the previous as its walls, celling, and floor were of white marble. It also lit up with magic light as they entered. To the north was a small empty niche in the wall and to the west, a short hallway that opened to the south. However, to the east was a recessed archway through which blazed a familiar white light.

As soon as the last mage in line, Excor, stepped over the threshold, the door slammed shut and a strange creature materialized at the center of the brightly lit room. This creature was a large serpent whose body split at its rear into six separate tails. Two of these were wielding a club and a spiked mace. The others were lashing the air like whips.

Isis: “What the HELL is that THING!?”