It was nearly two hours before the trio of mages was able to make it to the necropolis gates. All the way 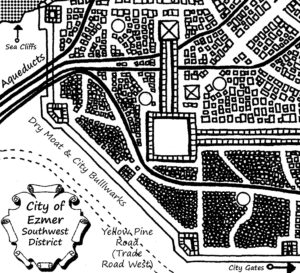 Accordingly, they surveyed the pitch dark for the evident light of a campfire but all was black. Suddenly, a shape rose from the shadow gesticulating wildly. All three of the young mages recognized the senior thug. He was signaling them as silently as he could to DUCK!

As a result and almost as a reflex, their heads turned in unison past the overturned wagon and the body of one of the thugs to where the Wher dragon was butchering the dead horses with its teeth and claws. Immediately the mages jumped into the ditch and pressed themselves hard against its slanted overgrown sides.

After an hour, every thug and mage present had kept a keen eye locked onto the dragon as they waited the situation out, the Wher flew off back into the necropolis bearing the better part of a horse carcass. Consequently, Excor decided to stay where he was for the rest of the night and sleep in the ditch.

Gornix dashed over to the thugs who were held up by the overturned wagon. The older thug was somewhat upset. Apparently he owned the wagon and was a bit angry that it had been broken up and both draft-horses eaten by the dragon. Fauna simply stayed in the pit with Excor following his example as well as being more comfortable in the thick tangled grasses.

Finally, morning came, the great purple moon and its rings darkened a large portion of the blazing orange dawn. The young mages and the thugs quickly wolfed down their iron rations and used what of the grog they could salvage to wet down the hard tack. After breakfast they assessed the damage to the wagon, it was determined a total loss. As a result, the old thug went on a tirade about “that double-dealin’ dishonest soft-skinned shiesty fop! Easy money my @$$! It weren’t enough! Not by a long toss! Owe’s me a pair o’ good horse an a WAGON!”

The angry old man roughly wiped the spit from his beard and flung his arm clean. He walked over to the other two thugs.

Gil (Gornix’s Player): “What!? Anybody have a flight spell or something!? Nothing? My CON’s not good.”

Cris: “You got anything?”

Excor marched off by himself and looking back at his companions shouted, “C’mon! Let’s Go!”

The three thugs grumbled, “Who the hell does that guy think he is?” between themselves. After a few seconds, they shrugged their shoulders and followed. Fauna and Gornix searched the broken wagon for rations for some unknown reason. However, they found nothing. Therefore, the pair had to run to catch up to their party.

Come noon the sun was high and blazing like molten platinum down onto the backs of the young mages and the surviving thugs. Accordingly, all were drenched in sweat and partially stripped of excess clothing. Road dirt smeared their faces and collected in dark patches to their sweat-soaked clothes. Fauna and Gornix were exhausted. A young thug, the youngest of the remaining three, dropped passing out from heat exhaustion face first into the pale rocky jaundiced dust of the road.

Barely even winded the elder thug and his pal continued on at a brisk pace ignoring their fallen compatriot as well as the mages they had hardly tolerated. Excor decided to wait after some thought and squirt some water from his waterskin onto his dirty sunburnt face. While the crunching trudge of the deserters faded into the heat-shimmering distance.

Regardless Gornix struggled over to the unconscious thug and splashed his face with some water. The young ruffian twitched showing that he was alive but he did not wake up. The remaining group decided to rest where they were. Fauna set up her pup-tent and slept. Gornix tried to help the sun-struck thug but was too weak and so stripped down rest under the arid shadow of a nearby rock.

Gornix as he waited for his companions to recover enough to continue to foot it to the city walls identified the dagger they had taken from the sarcophagus of Dag-Athar. All he could get from the obviously magic item was its mystical connection to a demon. Some runes blazed into view like fire along the curved golden blade.

Cris: “That’s it. I stop touching the thing and wrap it in a rag and stash it away!”

Cris (to Gil): “Hey man you want to carry the dagger!”

The day progressed and by late afternoon (approx. 3 pm) Gornix was fully recovered however Fauna and the thug were still out of commission. Gornix summoned a pair of earth elementals (again barely hitting the control roll DC) and had them carry the druid and thug. After an hour when the creatures melted back into the yellow road Fauna had recovered but the thug was still out.

They paused long enough for Gornix to render first aid and when the thug finally was able to stand, barely, the mage lent him his staff to walk with. They soldiered on towards Ezmer. It was not for several more hours (till about 9 pm) that they reached their goal, the city gates of Ezmer. The gates were shut tight.

This was because the gates shut every day at sundown only to open again at the first light of dawn. So, to one side of the gates was a wayfarer camp and to the other a gypsy camp filled with music and Southern Nomads dancing wildly around their roaring bonfires.

Fauna decided to “check out” the gypsy camp. As soon as a pair of nomads approached her showing signs of the mixed blood of humans, faun, and Naga she freaked and left to rejoin Excor who leaning against the city-gate.

Gornix, on the other hand, was trying to follow the thug that had his staff and lost him somewhere in the wayfarers’ camp. For this reason, Gornix rejoined his companions at the gate where they had set up to sleep in a corner against the great wood and iron gates. He cast clairvoyance focusing on his staff and on the strength of his vision, he urged his companions to the western aqueducts.

Finally, they stumbled to one of the gargantuan aqueducts that fed the city water from rivers miles away to the south. They observed the white stone arches as they stretched over the wide and deep stone-lined dry moat. Constructed behind the moat were the battle towers and city bulwarks. The three mages heard a slight chirping from above.

Gornix caught his staff, tossed to him by the thug he had doctored. The young man was above them on a ledge of the aqueduct. He signaled them up. The only words he spoke were in a raspy whisper, “Shh. Keep quiet and follow my lead.”

Therefore, they carefully edged their way across the aqueducting along the narrow bird-dropping encrusted edge. Occasionally they suffered the nip of a beak on a finger misplaced in a pecked out burrow. About midway across the span and only halfway from their goal the leading thug signaled them to stop and lean in against the stone. At this point if any of their grips failed the height of the fall and the impact on the stone lining of the moat would’ve killed any one of the four sneaks.

The young thug sent a twittering bird-call across the moat to the other side. Consequently from the top of one of the battle towers they could all see the yellow-white flash of a signal lantern. The young thug looked back and signaled them to follow. Finally, they continued to the other side where a watchman armed with a crossbow helped them down into the battlements of the bulwarks and from there the thug led them into the streets after sharing a special handshake with the man. Only Fauna noticed this but was unable to memorize the handshake.

Soon after, they were somewhere in the Southwest District of Ezmer navigating a narrow alley among the small crowded multi-story buildings. At this point, the young thug turned to Gornix as he started to duck into a dark and narrow side-alley. “You’re a good man. I would’ve left you.” Gornix began to try to say something back.

After getting their bearings, the group headed out to the Red Helm hoping that Draiga had their pay in hand.