It was still in the wee hours of the morning and dark outside of the Red Helm Tavern. The trio had 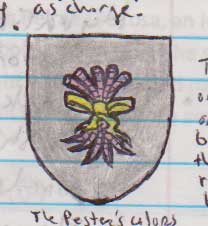 already been introduced to a tall Ferenoi (Feren Amazon) named Athfonia (Played by Perla) by Draega. Apparently a new arrival to the cabal that their leader, Belrae had failed to mention.

Eager to talk business and naturally distrustful of the “new member” Excor urged her exemption (unnecessarily). This, as Draega guided them to the cellar. Immediately after the gold exchanged hands Excor was off to his apartment in the South Market District. His two companions and the newbie stayed at the invitation of publican Draega.

It wasn’t long before the drowsy bar-back allowed another into the quiet confines of the deserted tavern. It was the man famed as “Golden Devil”, a Lord of the Golden Devil Company. He was wearing a suit of leather armor under a gold carapace alive with flames and flying grimacing demon heads. At his hip on his wide gold studded black belt hung a coiled gold bull-whip. On his head was gold skull-cap with a top-spike and a brim of black fur. He wore a gold mask, an emerald eyed demon-face baring an expression of pure rage. A frozen rage that seemed to seep into his very frame and the carriage of his bulk.

With every heavy step the floorboards creaked under the devil’s weight. Immediately and without a word Draega led the supreme slave-master of Ezmer to the basement. Presumably to exchange the dagger of Dag-Athar for his reward. The three young mages rubbernecked with widened eyes as the devil walked by. As soon as the cellar door shut and the latch thrown, Gornix immediately ran up to it. He put his ear to the wood.

Athfonia was a shaman from a semi-civilized part of the continent known as Fuglotia, a barbaric peninsula in the far north partially conquered and re-conquered by the Feren Queendoms. The amazon was dressed in furs with a grey fur-fringed cloak which billowed from her 6 foot 7 inch wide-shouldered frame whenever she turned to snatch and guzzle her drink from the bar. Under that she wore a grayish toga of thick wool trimmed in black and gold. On her feet a pair of wolf-skin boots secured with leather wraps. She had set her broad-tipped short spear to lean against the bar.

Later that day, by late afternoon, Excor was perusing the stalls in the massive bazaar until he found what he was looking for, a copper spike. After making his purchase the young mage headed to his main contact’s apothecary shop. The shop was located in a small box of a building at the crossing of two circumspect roads in the Old Market District with a direct view across a plaza of the Bazaar.

Babia (Sská in Split-Tongue) the shop-keeper was a slight woman in her later years. She wore a heavy white robe secured at the waist with a thick blue-felt band. She also wore a loose turban that also draped around her face in an effort to conceal the greenish scaling around her ears, on her cheeks, and along her jawline which in her later years has become increasingly prominent as well as her lack of ears. Of course, it only took a glance at her slit-pupil yellow eyes to reveal her half-Naga nature.

The atmosphere was pungent with the mixed scents of a plethora of exotic and fragrant herbs. Herbs which hung drying from the rafters of the shop like an upside down thicket in late spring. The potent umbrage almost completely obscured shelves upon shelves of jars and several multi-drawer apothecary chests. Excor was looking for some Yellow Lotus.

He was informed that someone came along and bought all of it up yesterday. So the young mage settled for 2 silver-pieces worth of shop-mix smoking herbs. Afterwards he left to meet up with Gornix at the Red Helm.

Gornix meanwhile was tracking down his contact, a ratter named Doubab in the un-policed Eastern District. The ratter who by chance was just walking back to the High Pesters’ Guild guild-house with a stave hung with at least a dozen dead rats. The experienced ratter had no news of any kind other than a bit of advice to not trust any “filthy” ratlings. However, when prodded a little more he did mention that there was a bounty of 1,500 gold pieces for a mage and assassin named Ssthris. The Bronzeheads were probably sheltering him but he wanted no part in that.

The Bronzeheads were the lords of street crime in Ezmer essentially the Ezmerian mob. A tattoo of a red rat was their mark. They have carte blanch within the ruined wall and tower in the Eastern District. Within the wall was a city within the city. Gornix high-tailed it to the Red Helm armed with new information.

Fauna at the same time was walking back to the Red Helm form the Bazaar where she ordered some “stylish” green robes from one Andras, tailor extraordinaire. She passed a bill-plastered wall and stopped to read a wanted poster that caught her attention due to its still-fresh glue. It listed one Ssthris, a half-naga sorcerer wanted for a series of assassinations in the Old Market District and one in the Bazaar. The reward was 1,500 gp. Suddenly, she felt a hand under robes.

She snatched the street urchin’s dirt encrusted little claw and saw that he had hold of Bumble’s “paperweight”, the fist-sized piece of amber with a golden bee at its center. She snatched the amber piece back and the kid ran for his life disappearing into the street traffic. The young druidess tried to follow only to find a bundle of rat-tails bound with a yellow ribbon that urchin had dropped.

That evening at the Helm, Excor and Gornix were already upstairs sequestered in the cabal room exchanging spells with each other. Fauna hit the front door at the same time as Draega was making his entrance to the establishment. He immediately comped her a jack of ale and began dishing about another new member to their “little club upstairs”.

It wasn’t long before the titular ninth member made his appearance slithering through the door and up to the bar to inquire upon the whereabouts of one Belrae Crokosa. Draega immediately glided up to the black-scaled Naga and introduced himself and Fauna. Szoosha was his name. He was apparently gifted when it came to fire.

Szoo (Played by Isis, Jenn’s sister): “I like to burn things.”

Szoosha had the ability to conjure a naginata of pure flame in his hands, the ability that marked him as a black-scale in the first place as well as being a Fire Elementalist. However, Szoosha was visibly uncomfortable with complete strangers suddenly knowing his name. Not long after Gornix and Excor wandered down and decided to buy food.

The group of four mages took up a table near the window across from the taproom. A bowl of boiled onions, a wood platter of bittles (honey drenched balls of ale-soaked bread), and for Gornix turtle soup in the shell. By the by, Fauna was busy scanning the crowded taproom and through the haze of pipe-smoke she saw a suspicious looking character at the end of the long table nearest the window.

She had caught him eyeballing the group and saw by chance (Natural 20) that he had a tattoo of a red rat on the side of his left hand. So, putting together what Gornix had told her of the Bronzeheads and their possibly sheltering the wanted sorcerer she decided to approach him and “charm him”.

She walked up to him and at the mention of Ssthris he shot to his feet and pulled his dagger. Excor and Gornix jumped to their feet but Szoosha was busy stuffing his face with handfuls of sticky bittles.