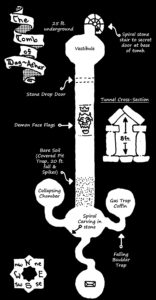 by Jenn, and Gornix the Ivoran Wizard played by Gil) slowly progressed down the dank ancient passage their lights pushing back against the smothering darkness of the tomb. Gornix led the group tapping each flagstone in turn before he stepped upon it with Fauna just a step behind him. Excor was 10 ft. behind her however.

Gornix paused due to an unexpected floor feature. He carefully inspected it. Laid before him was a large flagstone with the graven image of the grinning horned demon. After contemplating how to proceed and after some needling by Fauna he decided to just jamb it with the butt of his staff. All three of them froze in place as the strained squealing of some hidden machine echoed from behind the walls presumably triggered by Gornix’s hasty action.

A stone slab slid and crashed down suddenly just in front of Excor sealing him off from his two companions. Gornix and Fauna inspected the other side of the stone drop-door.

They searched for a reset or switch or anything to retract the door. They even checked for magic but nothing. The door was too heavy to lift, left no purchase for a crowbar, and was airtight. About the time Fauna and Gornix were shrugging in frustration, the grinning demon’s visage mocking them from the door’s face, Excor Ghost Step-ped through to join them.

Gornix: “There’s gotta be a way to get through that door around here.”

Excor: “No. It was probably meant to trap whoever comes down here. AND it’s airtight huh? Damn. We might die down here even if we get the dagger.”

They continued in a single group this time just behind each other proceeding just as slowly, if not slower, than they had been before. As the end of the tunnel was starting to become visible by their lights, they noticed the flags abruptly ended with the floor continuing as moist bare black earth.

Gornix: “I’m not touching that.”

They conferred for a few minutes ultimately deciding to use various spells to “ghost over” the patch of bare ground deeming it to be an obvious trap (it was, just your average 20 ft. deep concealed spiked pit). Excor cast Ghost Form and floated over. Fauna cast Gaseous Form over both her and Gornix. Their mist-forms drifted to the terminus of the tomb throat.

They all found themselves in a chamber identical to the entrance vestibule save that there were three narrow openings into passages that snaked so that they couldn’t look too far into them from the thresholds. A pair of thick stone supports and a stone lintel formed each of the three openings. Carved into one of the supports to the center opening was spiral design.

Excor (as he’s staring at the inscribed spiral): “I bet this one is where have to go. Hmmm. Not sure though.”

Fauna and Gornix solidified reverting to their normal mortal forms. Immediately, Fauna used her divination skill to determine that their goal was indeed through the center opening. As Excor’s Ghost Form spell was still active, he elected himself the first to proceed down the central snaking passage. At the end of the narrow passage was a small rounded chamber with a stone sarcophagus at its center.

Gornix’s spell expired then setting him down near the stone coffin. Suddenly a large golden scaled serpent struck him with its venomous dagger-like fangs. The creature appeared as an unnatural cross between a viper and a constrictor. Dropping his torch he reeled back away from the monster its venom searing along his veins to the other side of the sarcophagus. The torch continued to burn casting long shadows along the chamber walls and leaving the entire portion behind the sarcophagus black. This creature was doubtlessly the tomb’s guardian.

To save his own skin Excor cast Blinding Flash but to no effect. Dropping her lamp behind the threshold, Fauna charged in and cast Arcane Bolt at the creature but the spell seemed to have no effect. Immediately behind her, Gornix jumped into the small chamber and cast Chrono-Missile but the creature dodged the missiles easily. Gornix again cast Chrono-Missile and again the guardian serpent dodged. So, the young wizard tried to summon some earth elementals (of all the spells to pick for his starting spells he picked Summon Elemental IV, hope he knows what he’s doin’ with that) but failed.

Three medium-sized earth elementals in humanoid form rose from the ground and walls, their bodies of clay and stone. Gornix had successfully cast his spell and lucked out with the control roll to keep the creatures under his spell. The elementals immediately fell upon the golden serpent but it dodged all three of their attacks. Fauna tried to cast Lightning Bolt but the spell failed.

The guardian serpent struck at one of the elementals retracting with nothing but a mouthful of dirt. Gornix readied as his elementals attacked. Two missed with clumsy but powerful swings of their rocky fists. The third trapped the monster within its stony grasp and held the squirming beast against the flagstones. Gornix saw his opportunity for a coup de grace striking its head sending the butt of his staff crunching through its skull and into its brain killing it instantly. The tomb-snake’s corpse melted away to nothing as a result.

Without missing a beat, the trio turned their attention towards the sarcophagus and hoped that it contained their quarry. All three left the room and stood behind the threshold. From behind the burial chambers threshold, Gornix commanded his elementals to throw off the lid of the stone sarcophagus. A sparkling cloud of poison dust burst into the air hovering in a dense cloud about the radius of the room. They waited for around 10 minutes while the cloud dissipated.

After the remaining dust settled, our trio carefully moved one after the other into the burial chamber of Dag-Athar. They peered over the chest high sides of the sarcophagus and within they saw a shriveled skeletal corpse with only shreds of pale blue material left clinging to its bones and grey bits of petrified flesh. Moreover, across its sternum under the mummy’s crossed arms rested a gleaming gold dagger.

The dagger was of mirror-polished solid gold with a curved and wickedly sharp blade. In its pommel was set a smooth polished emerald that sparkled venomously even in the scant light of the tomb. The three mages debated on whether or not they should just grab for the blade and hope for the best. They also argued about who would be the one to make the grab.

When the corpse sprung unexpectedly to a sitting posture, the group leapt back from the coffin and prepared for battle. The corpse began saying something in a voice that at first sounded faint and hollow as if echoing from an immeasurable distance. Slowly the eerie voice moved into the burial chamber with them. It was full and deep carrying with it unbendable authority. However, the voice was speaking in a language alien to any of them.

The GM (me)(to Jenn): “Um, don’t you have the Druid Secret Tongue as a language?”

Gil (sonsulting his character sheet): “Wait. I think. I have something.”

Gornix cast Comprehend Languages and began to translate for the benefit of the other two.

Dag-Athar (the corpse): “…a boon I grant to you tomb robbers though your fate will be that of any common thief to lie with me forever in this tomb. For now, you have 3 questions to ask of Dag-Athar the Golden.”

The mummy of Dag-Athar the Golden presented the dagger to Gornix so he snatched it from the corpse’s claws.

Fauna: “Is the dagger magic?”

Gornix (before Excor could say anything): “How do we defeat you?”

Dag-Athar: “By asking the last question.” With that the corpse fell back and completely disintegrated.

Jenn (turning to look at me): “We could have asked it anything huh? DERP!”

Cris just shook his head and gave a disgusted sigh.

Excor searched the remaining dust in the bottom of the coffin and came up with a wood bracelet with a small carved non-precious stone. He tossed it back into the dust of Dag-Athar. There was nothing of apparent value in the detritus. He was still terribly wounded from the snakebite.

The trio was trying to figure out how they were going to escape the sealed tomb. They decided on using Gornix’s elementals to search the remaining two branches of the tomb. The group remained 10 ft. behind the earth-creatures as they led the way into the West chamber. As soon as all three of the elementals were inside of the threshold, a stone door fell sealing them in.

Cris: “Yeah man, they probably f*@#n’ melt into the floor and walls.”

After a little bit of in-game arguing Fauna charmed Gornix into leading the group into the last remaining burial chamber. They all pause as halfway to the room through the narrow bend of the passage a boulder that composed most of the ceiling and part of a wall moved and dirt fell (trap mechanical failure). Nevertheless, as it did not fall he continued on stopping at the threshold and visually inspected the chamber. He determined the whole thing was a trap. Possibly, the low ceiling which appeared to be a single massive stone would fall in if they were to make it to the sarcophagus at room center.

They backed out and sat in the antechamber. With the entire tomb explored, they were trying to come up with something, anything to get themselves out of this. They finally decided upon simply getting back to the drop-door near the entrance and “ghosting through” again though Excor was the only one that could actually do that. The air was already heavy. There was no proper ventilation to the tomb. They would soon suffocate. There wasn’t time for Gornix to learn Excor’s spell. Fauna channeled her powers from nature and so couldn’t learn any other spells aside from those she already knew.

When they reached the stone door that prevented their escape, Excor cast Ghost Step on himself and stepped through. In a sudden burst of inspiration, Gornix cast Mini-Portal and almost at the same time, Fauna cast Gaseous Form on herself and Gornix. Using the short-lived mini-portal they drifted through to the other side. They were reward immediately with a fresh gust of cool, breathable air.

Cautiously they wended their way up the stone steps to the surface and into the moonlit night. The cool air lightly tinged by ocean salt was such a great relief that they each spent a few seconds just taking deep breaths. However, they noticed something that left them somewhat uneasy. The graveyard was dead quiet. There were neither sounds of night birds nor the chirping of crickets or the tympani of cicada.

They stood crowded on the last few step with their heads sticking up from the subterranean tomb searching in vain for the whereabouts of the Wher. When they were confident that the dragon was nowhere in sight, they were definitely suspicious though, they made a break for it.