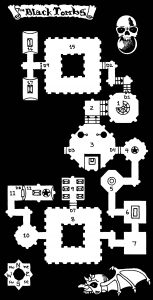 depictions of salt lotuses (room 11 on the map). To the east was a solid gold door emblazoned with lotus blossoms, gold bees and honeycombs (D8 on the map). The others saw the rune scribed on the door, which held it closed via the Wizard’s Lock spell. He cast Illuminate, inspected the paintings, finding that each blossom concealed a small hole. He suspected an acid spray trap triggered by trying to open the gold door.

Excor (played by Cris) was weak and still reduced to K.O. points from casting too many spells too quickly. He was not in a good mood and not feeling particularly brave.

Cris: “We’re not even close! Look at ‘em!” He made a dismissive motion at me (the GM). I have to say I was wearing it on my face. They were about only halfway through this thing or maybe almost two-thirds if you count the surface map.

The cabal mages made careful observations about the golden door and determined that only attempting to damage or pry the door would set off the trap, they hoped. Therefore, against his better judgment, Excor put his head to the cold metal door to see if he could hear anything on the other side at all, he couldn’t. So Szoo (played by Isis) gave it a try. Consequently, the naga did hear something that sounded like stone grating against stone.

Excor used the Amber Bee to open the door guessing that wouldn’t set the trap off. Holding his breath, he was the first to enter the burial chamber on the other side (room 12 on the map). As soon as he was through, he was face-to-face with a mummy. It was sitting up from its freshly opened sarcophagus.

The creature was wrapped in linen bandages carefully interlaced in a strange pattern each length bearing the faded black markings of an unknown language. At its side in the sarcophagus was a gold mace with a head fashioned to resemble a lotus blossom. At its other side were two sealed clay jars. It appeared to be confused at the sight of them and the Amber Bee in Excor’s hand. Being essentially near death and out of magic, Excor bluffed.

Excor: “We’re a part of the cleaning crew! Here to clean the tomb!”

The creature still seemed unsure as to whether or not to attack the mage. Seeing this Gornix pushed his way into the tomb and using a little Social Aptitude he managed to convince the creature that they were indeed neophytes and here to ensure the security of the tomb. The creature seemed to accept this but was keeping a suspicious eye socket on them at all times as they moved slowly and carefully around the burial chamber.

The chamber was long with a vaulted low ceiling and interior of white plaster. The sarcophagus dominated the center of the room but behind it stood a statue that barely fit. The statue was of ivory and had the form of a young woman with a pair of golden horns on her raven-haired head with four arms and a pair of solid gold wings. Meanwhile the white marble sarcophagus lid had a relief of a young priest in repose carved atop it.

Excor, wanting to get at the grave goods in the sarcophagus tried to bluff a hand into the stone coffin with the monster.

Excor: “Here um, let me um, clean that dust off those jars!”

Consequently it immediately knew something was wrong. The creature held up a boney hand bandaged in loose and decaying strips of filthy linen and coughed a strange hollow stream of sounds.

Immediately Gornix cast Comprehend Languages and understood that the creature had asked for a password. The Salt Lotus Wizard whispered this to Excor who cast Clairvoyance. As a result he spoke the first stream of alien syllables that entered his head. The mummy nodded and laid back as it pulled the heavy lid of its coffin back into place.

Breathing a sigh of relief the group proceeded to scour the room for secret compartments, hidden doors, cabinets, or for “anything out of the ordinary.” Eventually finding nothing, their attentions again shifted to the white marble sarcophagus and its occupant.

Excor: “Man, I don’t know. If I cast too many spells I could Kay-Oh myself!”

Gornix: “C’mon! This guy’s important! Look at all this!”

Gornix cast Mini-Portal on one side of the coffin. They had already elected Fauna (played by Jenn) to stick her hand inside to see if she could grab anything. This due to her DEX (dexterity) score being the highest in the group.

Fauna: “Does anyone have anything to keep the lid closed if he wakes up?”

None of them did.

So with more than a few reservations Fauna cautiously extended her hand and then arm into the mini-portal into the black of the sarcophagus interior up to her shoulder. She felt around blindly for a moment and then grabbed a handful of dusty bandages. Suddenly her wrist was snatched and her arm wrenched. She was within the vice grip of strong skeletal fingers.

Szoo readied to throw some magic fire if/when the mummy opened its sarcophagus. Excor cast Ghost Form on Fauna freeing her from the monster’s iron grip. He suffered more K.O. point drain from casting the spell. With one arm, the mummy tossed the heavy marble lid aside and sat straight up. Szoosha cast her fire spell but lost control of the magic. As a result the spell went wild and its magicks unleashed a black fire that engulfed Excor and Gornix burning away some of their intelligence. Gornix was rendered as a normal schlep, Excor was monosyllabic. Fauna sank back to the rear. Gornix couldn’t get his spell off as his lowered intelligence made it more difficult to cast the spell.

Excor activated the Shield spell on his magic amulet. Szoo summoned and struck out with his flaming naginata slashing a smoking black gash into the mummy’s side. Fauna moved back in casting Throw Flames dealing some damage to the monster lighting it aflame. However, it magically extinguished the flames with a wave of its hand. Gornix tossed a healing potion Excor’s way. Instead of drinking it, Excor cast Life Blast at the mummy dealing some damage. The singed and smoking mummy swung its lotus-blossom mace at Szoo but he parried the blow with his polearm. Gornix attempted and failed yet again to cast a spell. The monster cast its spell filling the chamber entirely with golden fire burning Szoo bad. Gornix avoided by pure luck (Nat 20 save), and Excor’s Shield spell was blasted away.

The mummies wrappings whipped from it and struck at the mages like tentacles missing Excor twice, being parried by Gornix, but entangling Szoo.

Fauna readied with a Throw Flames spell should the mummy approach. Szoo struggled to get free of the bandage tentacle. Gornix cast Slow at the creature but it shook off the effects with no problem. The mummy used its wrapping to move Szoo out of the way as climbed out of its box stepping to Excor. Excor moved back to the entrance and cast Slow. However, the spell went wild and he wound up affecting Fauna instead causing her to lose her ready attack.

Fauna activated her Shield item. Szoo broke free of the wrapping. Gornix successfully cast Amplify Magic on the mummy. The monster healed itself of some of the damage it had suffered. Excor tried to cast Shadow Ribbons but his reduced intelligence made that impossible.

Gornix cast Slow on the mummy but again it resisted his magic. It swung its mace at the Salt Lotus Wizard and missed. Excor drank the healing potion he still had in his hand.

The mummy healed itself again. However, the mages efforts had worn heavily on it. It’s wrapping-tentacles whipped again striking out at the mages. Excor avoided one but was grappled and enwrapped but another. Szoosha parried another and Gornix was snared by a fourth after a failed dodge.

Before its ashes were even cold, they ransacked the chamber and the sarcophagus. Hence, they took a jar filled with gold dust, the other with 1 dose of Gold Lotus Honey. Excor identified the Gold Lotus Mace. It was a solid gold light mace and a +2 magic weapon. He tossed the gold dust jar into the portable hole he carried. After, he rolled it back up and stuffed it in his robes.

Eventually Cris relented and the group pushed on with Gornix in the lead, back into the crypts (room 8). They explored its northern portion discovering a solid bronze door. It was wizard locked and warded (D7). Excor used the Pass Door spell on his Platinum Key to gain entry. The chamber was plastered white with a single niche to the north in the wall from which an amber firefly burned. Six large stone sarcophagi dominated the floor (room 9 on the map).

As a matter of course, they proceeded to open each sarcophagus and found and fought three undead mummies. They defeated them one at a time with little difficulty. They looted a pair of gold bracers, a gold ring, a gold pectoral plate, and a gold sickle sword from each. Finally, Excor tossed those in “the hole” as well. Afterwards they barricaded the door with a coffin lid and decided to rest for as long as they could. Before they went to sleep, they tried to contact the others but the cabal medallions could only pick up static or silence.