Szoosha (played by Isis) was in the lead with his flaming polearm held up for light, Excor (played by 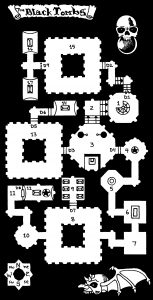 Cris) followed with his lantern. He had just opened the door (D3 on the map) using the Amber Bee to allow egress into yet another mausoleum (13 on the map). His intelligence restored due to a potion he had stashed in his robes. They had all just awoken from a fitful sleep in a burial chamber (9) and decided to penetrate the last area. Gornix (played by Gil) followed Excor his intelligence still average. Fauna (played by Jenn) took up the rear.

They carefully tramped into the pitch dark onto the faintly moist dirt floor. Again, there were body niches carved in the walls floor to ceiling. Szoo turned north and slid only a few feet along the cool dark soil before he suddenly stopped. He was face-to-face with a black lotus mummy. Thick black ooze dribbled and bubbled from its mouth and nose. It was wearing a gold necklace with the image of a black enamel lotus dangling from its neck, and a gold ring set with an obsidian stone on its right hand.

Immediately the creature exhaled a thick black mist and the unfortunate naga inhaling at the same moment in a silent scream instantly dropped dead. Consequently, that was when the rest of the group saw that behind the black lotus mummy were warriors armed with sickle-swords and bronze pectoral plates. Behind this rabble was another more skeletal mummy that appeared to them as a priest. It had a polished bronze open helm, a gold bee necklace, and a gold bee and tiger eye ring on its left hand also armed with a sickle sword.

The black lotus mummy stabbed at Excor with its dagger the crusty blade gashing him badly. The two warrior mummies advanced on Excor as well. The first took a swing and critically injured the mage. The second did the same cutting him down with a single irresistible swing. He lay bleeding and unconscious on the black ground. Gornix quickly cast Neutralize Poison on Szoo saving the naga’s life. The priest mummy moved around toward the rear at Fauna. As she poured a healing potion down Excor’s throat she shouted, what she hoped was the password at the priest mummy. It was the password she had memorized “just in case” from the previous day.

The mummies stopped suddenly and backed off somewhat. Excor conscious but still near death slung down another healing potion. They decided to in Cris’ words: “walk around and see what we can get into”. However, they were going to try not to anger the mummies who kept following and observing them.

Gil: “Wait. Why don’t we just take these guys out?”

Cris: “Hell no! I almost died fighting them and he [indicating Isis] died!”

Gil: ‘Well walking around this place is just as dangerous!”

With the mummy squad following them, the mages continued north then northwest around the corner. There they found another solid bronze door (D5) in the north wall. Excor read the magic runes scribed on the face of the door. The door was sealed with the Wizard’s Lock spell and warded. If the door was even touched, it would strike the interloper with a level 6 bolt of acid. He found no indentation for the Amber Bee.

Gornix cast mini-portal in order to try to see what was behind. He saw that behind the door was a short hallway lit eerily by a pair of amber fireflies in their niches that continued north then cut east around a blind corner. They tried to convince Fauna to touch the Amber Bee to the door she wisely refused. Gornix used clairvoyance to try to find a way to open the door but he got nothing.

Excor: “Let me see the map … why don’t we Ghost Step through right here so we don’t have to touch the door?”

Isis (to Cris & Gil): “Problem is only you two can cast Ghost Form!”

Fauna: “Don’t sweat it, I got Gaseous Form.”

They turned and made sure the mummies weren’t going to try something though they were looking askance at the mages. All at once, Excor and Gornix ghost stepped through the wall into the hallway. Fauna cast Gaseous Form on Szoo, and herself. They passed under the door. They moved quickly down the hallway and around the corner to end at yet another door. It was another solid bronze door with a gold bee and honeycomb motif (D6). Fortunately, they found a depression that fit the Amber Bee.

Behind the door was a vaulted tomb where a single black sarcophagus dominating the room (14 on the map). The flagged floor littered with a layer of detritus from the plaster that had at one time adorned the tomb with a mural that covered all of its walls and ceiling. A glowing amber firefly in the niche behind the coffin lighted the ancient tomb.

Excor did a clairvoyance for what the mural had appeared as before its long ago disintegration. The mural had been a panorama of a surrounding red land littered with gold beehives and fields of lotus blossoms. Above the four-armed goddess with golden horns and golden wings dominated a deep blue sky. In the distance, a natural red spire emerged from the horizon.

They readied to pry open the sarcophagus and thus Gornix and Excor cast Breathe Without Air on themselves. The other two drifted outside of the vault as the spell affecting them would soon dissipate.

As soon as the two mages were able to pry the lid loose a blast of powdered hematite blasted them in the faces, fortunately they weren’t blinded, and filled the tomb with a poisonous dust cloud for a few seconds. Those two backed off to join Fauna and Szoo at the doorway.

Inside of the black sarcophagus was a dead mummy adorned with a gold bee necklace, 3 gold rings, a gold skullcap, a pair of gold bracers with a honeycomb motif and a large emerald in each eye socket. Erring on the side of caution Gornix lifted the loot from the coffin using his Mage Hand spell. Excor was able to sense magic from two of the rings, the skullcap, and the bracers. Gornix then decided to inspect the hallway and tomb for any secret compartments or doors.

Meanwhile, Excor took to identifying the magic items. The gold skullcap was a level 10 item and granted a +4 bonus to I.Q. and so immediately Excor went and “slapped” that onto Gornix’s head restoring him to near his natural intelligence level. On the other hand the gold honeycomb bracers were level 6 items that granted the wearer a +2 to Strength (STR). The gold bee necklace cast the spell Sting 3 times a day at level three. The first gold ring was a level 5 item that granted a constant +5 bonus to Resist Poison and granted the spell Fearsome Form I once a day. The second ring was a level 11 item that granted the spell Verminous Might three times daily.

They began to debate about where to go since they didn’t want to face the mummy squad outside the door and eventually they began to argue, loudly. That is until the door to the hallway opened. Gornix cast Breathe Without Air on himself. Excor activated Shield from his Jet Amulet. Szoo cast Elemental Half-Plate Armor (Fire) on himself.

Szoo moved back readying if anything should charge him. However, Gornix moved up and readied a Lifeblast spell for the first mummy through the door. A warrior mummy moved in and the Salt-Lotus Wizard blasted it to dust. Fauna readied to Throw Fire at anything coming through the door. The priest mummy shambled through his mere presence sending waves of fear through Szoo and Excor who visibly cowered. Fauna unleashed a stream of flames aimed at the priest but she missed scorching a wall.

The priest mummy swung its sickle sword but missed Gornix by a hair. The second warrior mummy stepped through the entrance and was going to swing his sickle sword at Gornix but Gornix used his Battle Magic to cast the Force Ram spell in a simultaneous attack. The Salt-Lotus Wizard also blasted that warrior mummy to dust preventing its attack against him. The black lotus mummy stepped in and spat out a blast of black dust that filled the hall. Fauna, Szoo, and Excor dropped to the ground. It appeared that Szoo was only sleeping but Excor and Fauna seemed dead.

Gornix cast Mass Neutralize Poison, Szoo shocked awake. Fauna and Excor gasped and rolled on the ground sputtering. The priest struck again at Gornix whom clinched the monster’s blade with his scimitar. The black lotus mummy moved in and stabbed Gornix in the side with its dagger. Gornix tried to cast Force Ram while his sword was in a clinch but failed. The priest broke the clinch even though Gornix tried to keep it tied up. The black lotus mummy stabbed Gornix again in the side blood gushed down his side pooling at his feet.

The priest mummy swung its sword once more at Gornix narrowly missing.

Fauna crawled to her feet as she downed a healing potion. From the ground, Szoo, almost reflexively, cast an energy ray at the black lotus mummy but the magic went wild and a blast of fire twice as powerful as intended exploded the poisonous undead thing into a cloud of ash. Excor stayed on the ground and cast a Close Wounds spell on himself. The priest swung again at Gornix but again missed. Gornix cast Force Ram at it but the magic got away from him and went wild. It only did half damage when it hit the thing though it badly damaged it. It was Gornix’s last spell for the day that wouldn’t sap his life force (drain K.O. points per spell cast).

Fauna cast Gaseous Form on herself. Szoo unleashed another ray of fire at the creature catching it afire. From the ground near the mummy’s feet Excor cast Life Blast at it blowing its upper torso to bits. The battle was over. They all exhaled a great sigh of relief then looted what remained of the corpses.

In all they collected 2 copper rings, 2 copper necklaces, a gold necklace, an obsidian lotus figurine, and a gold ring with an obsidian lotus gem. They determined that the obsidian gem ring was a level 12 magic ring that granted a constant effect of Breath Without Air.

From the priest mummy they took a bronze open faced helmet, a gold bee & tiger eye ring (level 8 item, Sting spell 3 times a day), and a gold bee necklace. Before they backtracked back to the entrance and exited the tombs the mages went back to the room filled with amphorae (7 on the map) where Gornix threw 10 amphorae in to Excor’s portable hole. The players laughed about that last phrase for a little while.

Gil (turning to Isis who was laughing aloud): “You’re being so … juvenile.”

They emerged at noon squinting blinded by the direct sunlight and nearly stunned by the blast of dry heat on their skin. Excor tried the cabal medallion on a hunch and he was able to get a brief static-garbled message.

I just shrugged and couldn’t help but smile.