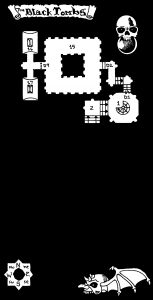 Gil) light sphere spell. Szoosha (played by Isis) the Black Scale Naga led the way. Excor (played by Cris) followed behind Gornix and taking up the rear was Fauna (played by Jenn) the druid. Szoo halted the group as they neared the bottom. They could all see a fairly bright but warm yellow light spattering across the landing through a narrow archway.

The walls were all of smooth black stone that reflected light poorly. The atmosphere was heavy and would have been overbearingly stale had the air not been freshened by having been opened for some time above. A tomb like must, a grave stench lay underneath the fresher drafts ever-present and eerily moist like a low fog. After staying stark still and listening intently for any sounds at all, for what seemed like ages, the mages decided to move into the strangely lit room.

The walls of the octagonal room (1 on map) were of the same smooth but powder-dull black stone as the spiral stairwell. It had a domed ceiling with an apex at 20 ft. There were small niches in each of the diagonal walls in which rested small egg-shaped pieces of amber containing a single firefly at the center. It was from these that the eerie light emanated. To the west, the walls opened into a large hallway, which sank 5 ft. via steps to a lower landing, also lit with weird light.

Excor admired the amber fireflies and noticed that they rested in small indentations in the black stone.

Excor (mostly to himself): “I just might grab me one of these ambers.”

Meanwhile Gornix was busy inspecting a suspect wall. Soon he found a secret door but before tripping the mechanism to open it he “poked it” with his staff to make sure that it wasn’t trapped. Behind it, he found another set of steps about 5 ft. wide headed down into more firefly glow.

Excor was inspecting a piece of amber with full intention of pocketing it. However, his Indiana Jones routine was interrupted when he was certain that all of the ambers were booby-trapped (he rolled a Natural 1 trap detection).

As the rest of the group began to move down into the secret stairway, Gornix loitered. When the others were out of sight, he snatched up a firefly and tucked it away under his cloak. He noticed that the gem stopped glowing when he had picked it up. He followed the group down taking up the rear.

After 5ft., the steps led to a landing lit by two more pieces of amber in niches. The steps continued west down five more feet into a short hallway. They stopped at a solid bronze door with a honeycomb and bee motif (D2 on map). Szoo could feel the magic radiating from the door and spotted the magical script engraved upon its surface. In response, the group cooperatively read the mystic script.

The door had the spell Mass Sting on it, if touched the door would fill the hallway with a spray of magical stings. As a result, Excor used his Platinum Key to Passdoor finding only an impenetrable darkness on the other side. He stepped back through and then spotted a depression where the latch and locking mechanism would normally be. He found that the amber bee fit into it and unlocked the magically sealed door. The group moved into the darkness and realized as Gornix’s globe illuminated that walls that they were in a dirt-floored mausoleum with body niches along the walls to the ceiling.

As they bickered as to which way to go, north or south, Excor spotted something shuffling in the dark. At his warning Szoo summoned his fire naginata. The fire light of the magical weapon revealed four mummies within 10 ft. of the group.

Each mummy was armed with a bronze sickle sword and wearing a bronze pectoral plate embossed with a lotus and bee symbol. The battle was short but intense. The mages used a combination of fire magic and the Lifeblast spell to eliminate their undead foes. Szoo and Excor took some punch and slam damage with Szoo contracting Mummy Rot.

Fauna cured Szoo’s disease and Gornix used Lifeblast to heal him. Excor, meanwhile, was searching the mummified corpses in the body niches for “something of value”. He found only a handful of copper rings and a couple of old copper necklaces.

They maneuvered their way to the other side of the mausoleum coming to an iron-barred door (D9 on the map). The lock mechanism was corroded shut. Even if they had the long lost key, it couldn’t open the door. The badly rusted iron bars were still impossibly solid. They could see a short hall behind it lit by another piece of fire amber in a niche at its end. In the same niche behind the amber firefly was a figurine in rose marble of a bee from which they could all sense a powerful magical aura. They could see open passages to the north and south.

Gil (slapping his forehead): “I have Ghost Step! WTF are we thinking!”

Both Excor and Gornix ghost through the bars and Fauna and Szoo follow in Gaseous Form. From there Cris, Isis, and Gil argued for several more minutes as to which way to go from there “up or down”, “north or south”, or “left and right” respectively. Eventually they decided to go north with Excor leading the way.

He stepped up to the doorway and saw that it entered a small vaulted tomb dominated by a large central stone sarcophagus (16 on the map). With Gornix just behind him, Excor decided to use the Energy Tentacle spell to open the sarcophagus. As soon as the heavy lid moved it unleashed a blast of poisonous gas that filled the tomb and small passageway. Fortunately, Fauna and Szoo were still in gaseous form and unaffected. However, the gas poisoned Gornix and Excor.

Gornix resisted the primary effects of the poison. However the secondary toxic effect still left him rigid of limb. Excor suffered the full effects and was very near death and total paralysis. The mages cast Neutralize Poison on each other.

Lying within the tomb was a rapidly decaying corpse, which at first shriveled into a mummy, then began to disintegrate into bones then into dust. Among the remains, the group scrounged a silver necklace, a copper ring, and a pair of bronze bracers all lotus themed. They also found a silver mirror with a lotus design on its reverse. When they identified the item, they found that it was indeed magic and granted a +3 bonus to Sense Motive. Szoosha and Fauna regained their solid forms.

Gornix cast Mass Breathe Without Air and they proceeded to loot the tomb to the south (17 on the map). They found much the same except that instead of a mirror they found an amber wand. When they identified that item, they found that it added a +6 to damage to any damage inducing spell cast through it.

They ghosted back through the bars and before they turned to leave the area and backtrack, Gornix cast Mage Hand to snatch up the bee figurine. Behind the bars spikes as long as spears shot from the ceiling of the short hall biting into the floor. The trap would’ve killed anyone stuck in there. Gornix was disappointed to find that the figurine’s magical aura was gone. It had been just a part of the trap.

Soon they back where they started (in 1). Szoo began to slither carefully down the wide stair leading west. As the others started to follow, they all picked up a whiff of rotting meat. On the rather large landing (2 on the map) they found the blasted remains of two mummies scattered across the stone-flagged floor and the rotting corpse of a young torchbearer. On the young man’s corpse, they found an Acton bearing the arms of the Bardic College.

The wide steps continued down to the south leading into a large unlit lower chamber.

**** Note: We’ve updated the Archives page with an easier to navigate Blog Index for the Articles, Essays, and Actual Play Blogs ****