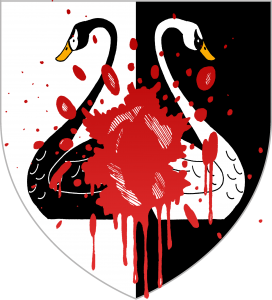 and a few splinters of carriage flying. A blast of ice spears hit Szoosha (played by Isis) through a window from inside the carriage. The naga attempted to dodge but failed. Gornix (played by Gil) cast mass Ghost Form again. The white knight pulled out a potion of maximized Heal and drank it. His wounds miraculously closed restoring him to full health. In the distance, the black knight, in full control of his mount now, was charging back towards the fray. Fauna (played by Jenn) tried to command the black knight’s horse once again to turn tail but failed as the animal was too far away.

Hufom peaked out of the window and ghostly white flames erupted from his palms in a cone at Gornix. The flames only slightly singed his phantom form. Gornix responded with an Elemental Blast (frost) which the ratling easily dodged landing near Fauna. The white knight stood up and pulled his weapon, his war-hammer. The black spurred his charging mount forward. Fauna attempted to cast Wizard’s Trick on Hufom but couldn’t get the spell off. Szoo threw flames on Hufom but the fire didn’t even singe his whiskers.

Gornix summoned two large-sized earth elementals next to the white knight. He was forced to dodge their stony grip. The black knight was near and very soon would charge right into the fray. His light lance lowered and aimed at Szoosha. Gornix slung chrono-missiles at the white knight injuring him even through his armor. The black knight came roaring into battle trying to skewer Szoo though the naga was still able to dodge away.

The GM (me): “Um. You know you’re still under his Ghost Form spell right?”

Meanwhile 10-miles north of the battle on the trade road Excor was trudging along the dusty road having finally reached it from where he had teleported. From behind him, a small caravan of Southern Nomads came trundling along. They asked if he wanted a ride but he refused.

Cris: “Hell no I’m not taking a ride with gypsies! They’ll rob me blind and leave me naked and tied up out in middle of the desert!”

The nomad caravan trundled away into the distance, a gaggle of young women (each an exotic mix of human, faun, and naga) waved and winked to him from the back of a covered wagon as it disappeared into the distance. The bitter mage just kept walking north along the road.

To the south however, the battle raged on. The white knight gripped his war-hammer with both hands and said a prayer but nothing else seemed to happen. The black knight shouted out what also seemed to be a prayer as he reared about on his horse. Szoosha suddenly became solid losing all bonuses and abilities from the active mass Ghost Form spell. Fauna once again attempted Wizard’s Trick this time aimed at the White Knight but again she failed the casting. Hufom cast Ghost Fire at the druid. Her shield spell caught the damage. The earth elementals slammed their fists into the white knight injuring him badly. Gornix attempted to cast Force Ram on him again but failed.

The white knight’s hammer did little to the stone behemoths assaulting him. The black knight circled around and decided to try to stick Fauna but his lance passed harmlessly through her as he rode by. Fauna tried to use Wizard’s Trick yet again, on the black knight this time but again her spell failed. Hufom tried to cast Ghost Fire but the spell went wild resulting in a sudden explosion of magical energy. Fauna dodged away from the blast as it would have injured her even in ghost form. Szoo was caught and needed to do a recovery check or be instantly killed. The white knight also dodged. The elementals were chipped and pitted but were still almost at full strength. Gornix cast Force Ram at the black knight knocking him from his horse and horribly injuring him.

The black knight threw his helmet to the side and drank a potion as he sat up. Hufom cast Ghost Fire again catching Fauna and Gornix in the silvery flames but causing only a little actual damage. Gornix cast Force Ram again at the white knight but he dodged.

Gornix’s elementals attacked the white knight. He dodged the first blow but the second smashed into him. Blood spewed from his mouth and nose. Gornix cast Force Ram once again at the white knight forcing him to dodge yet again.  The black knight got to his feet and drew his black mace. Szoosha still on the ground from the magic explosion simply stayed down and “played dead”. Hufom cast Ghost Fire again at Fauna, who bumbled right into the blast in her effort to dodge it. She was in bad shape.

Gornix cast Force Ram again on the white knight forcing him to dodge again but this time the spell still smashed into him pushing him into the carriage. Luckily, he wasn’t pinched in between the wagon and the magic force avoiding crushing damage (he got a successful luck roll to avoid the crush). The wagon overturned with a crash. He was barely staying on his feet.  The black Knight screamed at Gornix and attacked but his mace passed harmlessly through the mage’s ghostly form. However, Gornix felt as if the strange weapon had stirred his ghostly vapors. Hufom cast Ghost Fire at Fauna again forcing her into a recovery check to avoid death.

Gornix tried to cast another spell but the spell failed. The black knight swung again and this time his mace connected dealing minor damage to the salt-lotus mage. Hufom again cast Ghost Fire at Fauna catching her again. With a shriek, she collapsed to the ground.

Meanwhile in the north, a group of farmers drove by Excor but completely ignored the lone and dirty mage. He sighed and kept walking. A sudden gust of wind blew a small cloud of yellow dust across the road.

The first elemental smashed a fist into the white knight flinging his body like a ragdoll into the air. His limp form fell into a clump of high yellow grass off road. The second tried to grapple the black knight but he was able to stave it off. Gornix tried to cast Cloud Memory on Hufom but the ratling wizard fought off the magic, barely (he rolled within 1 pt. of the save). Hufom moved up towards Gornix and cast Ghost Fire at the salt-lotus mage dealing a little damage to him. The black knight swung on Gornix again but his weapon passed harmlessly through. Szoosha meanwhile crawled to Fauna and pulled out a potion uncorking it with his teeth.

Again Gornix tried to cast Cloud Memory on Hufom and again the ratling was able to fight off the magic (again he saved successfully by 1 pt.). From the corner of his eye, Hufom spotted Szoosha pulling out a potion and shot Ice Spears from the tip of his staff at the naga injuring him badly. The black knight furiously swung at Gornix but his weapon again passed harmlessly through. Szoosha poured a healing potion down Fauna’s throat.

Gornix cast Slow on the black knight but a Shield spell saved the white swan. Hufom moved further away from Szoo and Fauna’s position. The black knight swung impotently at Gornix again working himself into a frothing rage. Gornix again cast Cloud Memory at Hufom which took this time causing the ratling wizard to take pause as he forgot what he was about to do.

The first earth elemental tried to stomp on Hufom whom easily dodged. The second elemental grappled the black knight. Gornix then moved towards Szoo and cast Close Wounds on him. Fauna came to and prepared to cast a spell at Hufom. Meanwhile the black knight struggled valiantly to free himself from the stony grip of the elemental, in vain. Szoo cast Elemental Half-Plate Armor (fire) on himself.

Gornix cast Chrono-Missile on Hufom but to no effect his robes protecting him. The black knight broke the elemental’s grip. Fauna successfully cast Wizard’s Trick on Hufom turning him into a harmless snail. Szoosha coiled and then whipped his tail crushing it. The black knight wailed in rage. Gornix cast Slow on the white swan.

Fauna took control of the black knight’s warhorse and her and the naga leapt onto it and rode away. Gornix commanded his elementals to grapple the black knight, which they did. Sir Illin was helpless within their crushing grip. He was shouting “I’ll KILL YOU ALL!” at the top of his lungs repeatedly. Gornix cast Nature’s Ability on himself, grew wings and flew away.

Meanwhile to the north Excor continued his slow progress towards the city. He was covered in road dust and sweating profusely. Occasionally he grumbled to himself.