After about 2 days of straight travel, using a combination of the black knight’s warhorse (stripped 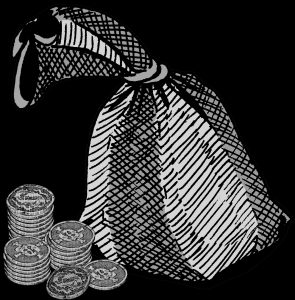 of its barding and equipment) and the blue Cloak of Teleportation the cabal mages found themselves within the walls of their beloved city. Fauna (played by Jenn) released the hapless snow-white charger from her control at the gates. It ran away starting eastward then suddenly it turned and shot southward instead. Over the next four days, the cabal mages went their separate ways planning on meeting up on the 14th of High Summer at the scheduled cabal meeting.

During this stretch of time, Excor (played by Cris) bought a change of wardrobe complete with gloves and spent most of his time drinking in the Red Helm tavern. Gornix (played by Gil) and Szoosha (played by Isis), both sharing a common paranoia about the twin swans catching up with them, went to the Yellow Spears to contract out some bodyguards (oh the irony). Szoo hired two lower ranked spearmen for 50 gp per month and a 110 gp contract. In comparison Gornix hired three lower-ranked spearmen and two “top ranked” fighters for 175 gp per month with a 110 gp contract.

They went to Virtra Wefa’s abode to collect their reward. The ill-tempered servant tossed the sack out into the street from a gap in the gate. They were then unceremoniously shooed off.

Hence they rushed back to the cabal room and split the 8,000 gp bounty. They had also split the take of the dragon’s treasure. Szoo took the superior quality scimitar with silver wire wrapped grip and large sapphire pommel (with +3 magic attack modifier). Fauna got the dagger that was identical to the scimitar. Excor got the blue cape of teleportation, and Gornix the purple velvet shoes with gold tracery. They granted their wearer a +3 bonus to Dodge and a +5 ft. bonus to Speed. The blue robes with black and silver embroidery would be stowed away in the cabal room with their hidden trove.

Fauna decided to rent a property for 45 gp per month from an associate of Draiga Skullshine (the Red Helm’s Publican) and bought a horse for 200 gp. She didn’t lose any time letting the others know and thus was quickly joined by them at the aforesaid abode. The property appeared long derelict and encircled by several high apartment and shop buildings. Therefore from the street only two narrow alleyways could be used to reach it.

The place was a single story house after the Westlander longhouse though it showed Creschan influences. It had a four stall open-faced stable to the left of the front door built directly onto the house. Its hayloft led back into the rafters of the main house. There was a slate-tile roof and tiny two-by-two square windows with wood shutters in the thick stonewalls. It was located in the North-Quarter district, very near the Bardic College and Guildsman’s Square. There were only two ways onto the street from the house. There were other narrower alleyways leading to the south-west, deeper into a small maze of hidden courtyards and dead-ends.

Soon the old house began to fill with the strange artifacts that inevitably accompany mages. Szoo had his dragon’s eye encased in glass and a polished bronze stand made for it. Fauna purchased some healing herb seeds, some vials of yellow lotus, and eight alchemist kits. She also purchased a potion formula for healing potion from Wensaer’s Alchemy Shop. Szoo also purchased a large iron banded chest with built-in lock and put in an order for a naga bowl-bed of rich wood and a superior quality engraved ruby and gold ring on the hard sell.

Isis (to Gil): “Be jealous! Ha! Ha!” He responded with a pained and puzzled expression.

Later Excor met with Jirek at the Red Helm to discuss the welfare of the rats and if any were showing any kind of “promise”. Hence the conversation moved smoothly along that track as the pair talked and drank wine from tin cups in the murky atmosphere of a busy pub. Then Jirek asked about where and what Excor had been up to, out of curiosity. So Excor hand-waved his and the others’ absence away as a minor political adventure, Jirek reminded him that Belrae had warned everyone to avoid politics. He added, “Did ya hear? Someone assassinated Hufom the representative of Bread Basket and waylaid the twin swans? Can you believe it that someone would piss those guys off like that? Could anyone be that stupid?”

Gil stood halfway up from his seat.

Meanwhile in the yellow-lit taproom of the tavern a fight had broken out between some Ivorans and a group of Creschans, which Draiga was trying to break up. As Excor left, he noticed that the Ivorans were wearing black and white checkered actons with the image of a purple axe on their chests. They were knights.

Later that week Fauna purchasing a goat and five chickens (for some reason), Excor and Gornix began formulating a spell, and Szoo was finally taking it easy somewhat believing that the twin knights had died in the desert. Fauna later sought out another member of the Brothers of the Rope (a secretive cult of which she was a member) at the city gates. She found a captain of the guard named Nelig, he also volunteered to teach her horsemanship due to her semi-successful “holy mission”. Vertra Wefa (the cult leader) had failed to get the nomination of her party and her plans went completely awry from there. This news increased the tension of the already frayed nerves of the cabal mages.

Fauna: “Don’t worry guys. He’ll send a messenger to alert me when the knights show up.”

It was the morning of the 13th of High Summer that the entire household shot straight from a dead sleep to wide-awake as the news of a distant crier met their ears. The twin knights were both alive and well and had just entered town. There was a knock at the door and it was a messenger for Fauna. Indeed, they had entered the city just before dawn and were meeting with the city guard.