They stood around the smoking wreckage of the animated bronze brazier. The accursed thing had 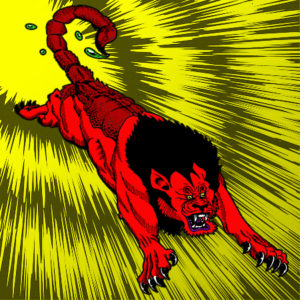 blasted them with fire missiles and slammed its metal body against them like a bludgeon. Athfonia (Played by Perla) had taken up the large flanged bronze mace (see Cabal of Eight Pt.12: The Under-City Vaults Pt.2). Fauna (Played by Jenn) and Excor (Played by Cris) had leveled lightning bolts at it but it was finally blasted to bits by Gornix’s (Played by Gil) Chrono-Missiles.  Standing around the ruined construct they realized that they all were “out of spells” and badly hurt. They needed to rest.

They contemplated the wall of force that filled the green arch in the chamber’s west wall. It was all that separated them from their quarry. A dark set of steps that angled down through the doorway in the north but they “weren’t ready for that yet”. The Dungeon Heart’s proximity was wearing on them. They considered a Mini-Portal but realized that even if the spell worked the gem was still too far away. In addition, both Excor and Gornix, the only two left with the ability to cast any spells in that vein, had already spent almost all of their K.O. points to continue casting spells beyond their limits.

Gil (disappointedly): “Yeah, me too.”

After quite some time they decided to go back to the chamber with the heavy table where the books on it had attacked them (see Cabal of Eight Pt.13: The Under-City Vaults Pt.3)(R12 on the map). They were going to barricade the north passage in that room using the heavy table within.

After backtracking and barricading themselves in, they set down their bedrolls and Fauna applied healing salves to both Excor and Gornix to speed healing. Athfonia used her last few spells to cast Heal Other on Fauna, Excor, and Gornix. They took watch in shifts and slept. Surprisingly they got a peaceful full ‘night’s’ rest. They choked down some trail rations, moved the heavy table aside, and continued north to the dark staircase with renewed vigor.

Fortunately, Gornix was able to discern, by jabbing it with his staff, that the first step was hinged and would give way if more than around 10 lbs. of pressure were applied to it. They continued with Gornix in the lead. He tapped every step so they proceeded somewhat slowly down the first flight. Then arriving on a landing they proceeded by the same method down the next short flight down heading east. Just before he stepped into the chamber before him, Gornix smelled the strong scent of concentrated sewer gas.

The naga threw flames into the chamber setting the air alight. They could hear the hiss-thump of the fire evacuating into a larger chamber beyond.

The newly singed chamber was barren with a domed ceiling where traces of paint could still be seen. The air was heavy and damp tinged with the stench of sewer water and sea brine. An empty niche lay to the east and a passage lay open to the north. The smooth stone walls were covered in perspiration and exhibited a high water mark at the waist.

They took the north passage finding themselves moving into a large cavern where the southern walls were roughly hewn as was the doorway that exited into it. On either side of the doorway were empty torch sconces still burning with illusory torchlight lending an eerie atmosphere to the natural cavern. The entire north part of the cavern sunk into water, a brackish impenetrable green and pungent mix of seawater and sewage. Before that, a trash strewn gravel beach. Across the water to the far west, they could see torchlight through a doorway atop a stone platform just above the water line.

Gornix decided to “scout out” the shoreline to try detecting any threats. Athfonia figured it a good idea to follow him. A soon as he got close to the water a large lump of blue-green slime slopped out of the water and tried to engulf him.

Athfonia, still wielding the bronze mace, struck the gelatinous thing with some effect. The creature shot out a tentacle at Athfonia but it fortunately missed. Gornix cast chrono-missile at it dealing some damage and then quickened a Ghost Form spell to protect himself. Fauna cast a lightning bolt at it dealing a little damage and Excor hit it with a bolt from his copper spike but it dealt no damage. The creature again tried to engulf Gornix but passed right through his incorporeal form. Gornix then leveled a chrono-missile at it and a lightning bolt dealing a bit of damage to it.

The sea-slime tried to engulf Athfonia but the amazon nimbly dodged it. Excor hit it with another bolt from his spike this time dealing some damage to it and Gornix finished it with another Chrono-missile. Afterwards as the slime melted into the gravel, they realized some of them would be swimming from this point over to the landing.

Szoo volunteered to swim himself and Fauna (who couldn’t swim) to the landing. He transformed into a large sea turtle, fauna put her cloak into his beak, and they were off. The others watched as they disappeared under the dirty water. It was a little while until they realized the druidess and black-scale naga were in trouble as they failed to surface.

Under the dark waters, a strong current had snatched a hold of the sea turtle and was dragging him straight down into an unknown abyss. The current might pull them out into the ocean somewhere near the harbor or it could drag them down into a deep complex of sea caves where the daylight has never and will never shine. Suddenly, Szoo felt a strong grip on his shell. He and his passenger were pulled up until they finally broke the water’s surface.

Athfonia had dove into the drink and miraculously blindly grabbed (Perla rolled a Natural 20) a hold of the sea turtle and was able to swim them to the platform. Gornix and Excor had already flown over each using the Nature’s Ability spell.

Fauna decided to lead, in part to get the furthest away from the water, and began using her staff to tap her way up the steps into flickering firelight. The steps went up and the passage bent at a landing lit with magic firelight that danced just above empty iron torch sconces. They continued around the bend arriving in an unlighted and barren chamber approximately 10 foot by 15. The painted plaster disintegrated off onto the floor from the sweaty and water-stained walls. There was only a single passage open to the south.

After Gornix searched for hidden compartments and secret doors (he found nothing), he decided to take lead. They moved into the next chamber via a short passageway. Gornix cautiously entered followed by each of the others except Excor. The young mages gathered into a group at the western end of the room leaving Excor in the hallway.

The rusted iron candle sconces around the top edge of the walls burst to light with flickering magic flames that were obviously illusory. The candle flames burned sans any candles and flickered within dense tangles of spider webs without ever setting them alight.

The chamber was startlingly dry with the floor covered in a thick layer of gray dust and cobwebs wafting and dangling from every surface. Above there was a 12 foot high vaulted ceiling and a thick round stone pillar at the west and east ends. Empty niches lined the walls each tall enough for an adult human. At the center of the room sat a large statue similar to another one they had already left behind in the other part of the dungeon. It too appeared as a crouching lion with a scorpion’s tail. However, it was larger and covered in layers of dust and cobwebs so that they couldn’t even determine from what material it had been made. On the floor around it was inscribed a magic circle glowing with uncanny blue light. Beyond that in the east wall was an archway that led into yet another chamber.

Excor curious at the mention of a magic circle moved into the room and identified the spell at a distance. Some sort of suspended animation spell. He was sure it was currently active. Therefore, desperate to check for secret compartments at the other end of the room Gornix circumnavigated the magic circle.

The others began to follow with Excor at the rear. The eerie blue light from the magic circle went out. Suddenly, the room exploded with dust blinding Excor and Gornix. The creature that stood at the center of the room appeared as an ultra-red lion but with a scorpion’s tail and a similarly armored back. Its bulging eyes burned green like fiendish emeralds each as big as a fist. The magic circle had been holding a minor chimera in suspended animation. Their trespass had awakened the guardian creature.

Fauna paralyzed and speechless with fear found her inner strength and shook it off. Excor splashed his face with his water-skin to wash out his eyes. Athfonia immediately cast Lightning Bolt at the monster singing its blood red hair black. Gornix stumbling blindly backward away from the creature splashed water from his water-skin into his eyes. Szoosha took no action, as he stood there terrified in the face of the beast. The chimera jabbed Athfonia with its tail stinger wounding and poisoning her.

Fauna swung at the creature with her staff but it bounced harmlessly from its weird hide. Gornix cast neutralize poison on Athfonia. Szoosha also found his inner strength and shook off the horror pulling his superior quality dagger. The monster raked Athfonia with its black claws tearing open a nasty and bloody wound in her side. This forced the Ferenoi to make a recovery check to prevent death. Gornix cast Chrono-Missile wounding it. The chimera snapped its powerful jaws at Fauna whom parried the bite with her staff (barely).

Fauna cast Lighting Bolt on the monster but it resisted the effects of the spell. Szoo slashed at the monster with his dagger notching its hide. Excor shot an electrical bolt from his copper spike but the creature resisted that spell as well. The monster’s deadly tail struck Szoo in the chest. The naga was able to resist the primary effects of its venom. Gornix summoned three medium sized earth elementals their stone bodies rising from the floor as if from smoke. They instantly snatched the beast in their stony grip. The young mages essentially beat it to death after with their staffs.

With the beast dead Gornix immediately ordered his elementals through the archway and into the eastern chamber from which they could see the glare of a familiar glow. The white light of the Dungeon Heart. Meanwhile Excor tried but failed to sever the scorpion tail from the chimera. He was distracted from his work when in the other chamber one of the elementals fell into a trap door at the center of the room.

Gil: “But the other two are fine right?”

Seeing that the other two of his elementals hadn’t triggered any traps. Gornix guided the rest of the young mages into the eastern chamber careful to take the same path.

They moved carefully into the next chamber. It was decked out in all white marble tiling. The only features of note being an empty niche in the north wall and a familiar green marble archway in the south. Through this green archway they could see their prize glittering in the green cell. Fauna used her staff to check to see if yet another Wall of Force would block their progress.