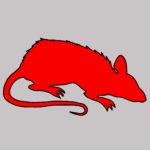 young mages tried to tighten the noose they had him in. Gornix (played by Gil) had already moved around to the opposite side of the thug between him and the door. Excor was keeping his distance but was approaching in a position angled just from where Fauna (played by Jenn) was standing trying to cut off a path to behind the bar.

Fauna was trying to “talk him down” but only accomplished in him pointing the tip of his blade at her. However, the druidess was able to discern the mark of the Bronzeheads on his chain-shirt; a fading painted red rat across his chest. In the meantime, Szoosha (played by Isis) was still at a nearby table eating.

After a few minutes, the Bronzehead seemed to resign himself to the situation. Taking a deep breath, he sheathed his dagger. He calmly wiped back his greasy hair from his face and then immediately lunged at Fauna. She sidestepped as he ran past her and around the corner past Szoo’s table. Excor, instead of running behind the bar to try to cut him off turned to pursue, as did Gornix pushing past Fauna. The thug stumbled drunkenly past the curtained booths and towards the door that led to the rear hallway. He threw it open and dashed in well ahead of his pursuers. However, he immediately smashed into a waiter with a tray full of food and beer who was standing just behind the threshold.

Bouncing off the unfortunate waiter the thug flew back, hit the floor, knocking himself out. The young mages caught up and helping the waiter to his feet gave him a small “tip” while excusing their “drunken friend”.  Gornix “helped” the unconscious thug to a chair pulled from the nearby-unoccupied table. He also took the “precaution” of searching him confiscating 50 gold devils, 8 gold pieces, and 7 silver pieces in the process.

Afterwards, the trio, plus Szoosha as he slithered up in mid conversation, began to argue about exactly what constituted “interrogation”.

Fauna: “Guys? We’re in the middle of the tavern.”

Gornix: “Let’s take him to the cabal room!”

Excor: “We can’t torture him!”

Szoosha: “I’ll do it, he probably deserves it!”

Excor (Pointing at Szoo): “NO! First of all I don’t want to bring somebody up there we don’t know! And we can’t torture him IN the room!”

After a short while the thug stirred in his seat as he began to come to. As a result, Fauna ducked around the corner into the rear hallway. Gornix readied his staff and Excor was going to try to “play it off”.

Without a word, the thug erupted from his seat lunging towards the open doorway and pulling his dagger in a single fluid action. Excor leaped back and out of the way.

Excor (to Gornix): “You stole his money but forgot his dagger!?”

Cris: “You know that money goes to group right.”

Meanwhile, the Bronzehead was through the door and into the rear hallway heading for the backdoor into the alleyway. Fauna cast Invisible to Sight on herself and moved around the corner. Excor cast Blinding Flash not only blinding his target but also Gornix and Szoo. Gornix tried to blindly chase after the thug but wound up crashing into a wall and falling on his butt. Of course, Szoosha repeated that mistake and bounced off the doorjamb falling across the hallway floor. His tail tumbling underneath the feet of the fleeing thug tripping him up.

The fleeing Bronzehead slammed into the floor with a crash and the creak of over-stressed wood. His fine dagger flew from his grip clattering into a corner as his face met the floorboards.  Gornix, still blinded, got to his feet. Szoo, still blinded as well, also rose.

Though Fauna remained where she was should Excor let anymore spells fly. Gornix cast Invisibility I on himself disappearing from sight. Leaping over Szoo’s tail Excor ran past the thug on the ground and leapt onto the stairs (for some reason). Szoo cast Eternal Flame holding the bright red fire in his hand (for some reason). So, the thug jumped to his feet positioning himself to leap through the backdoor and out of the tavern.

Gornix regaining most of his sight rushed over to where the thug dropped the dagger and picked up the knife. Szoosha dismissing the crimson flame tried to press the thug into a wall with his scaly bulk but tripped over his own coils and face planted. Then the panicked thug jumped through the door smashing it open with his body and running out into the darkness.

Excor and Szoosha stayed behind and talked as Fauna ran after the Bronzehead hot on his trail with Gornix following behind her. So, the pursuing pair dashed through narrow alleys choked with piles of trash and filth. Their heavy steps splashed through dirty puddles and the salt in the warm summer night air set their lungs on fire. They passed under a massive white aqueduct arch that towered well over the surrounding three and four story buildings. Even the ghostly layer of smog visible in the moonlight hovered below its massive curve. Fauna shot around a corner with Gornix biting at her heels.

Suddenly she stopped. As a result Gornix slammed into her back forcing her face first into a filthy puddle and into a lot of what was hopefully mud. Fauna got up and collected her senses but found she had lost the rogue’s trail. Gornix remembering that he had the fugitive’s dagger cast Clairvoyance on it. But he didn’t get much, it was brand new and of superior quality. Although he did notice a maker’s mark stamped into its ricasso. It was a tiny acorn with a stylized Hyvalian character at center.

A little while after but still hot (and soiled) from the chase, Gornix and Fauna rejoined their companions at the Red Helm Tavern. They found Excor and Szoo at the bar talking with Draega Skullshine. They had the skinny on the red rat (the symbol of the Bronzeheads) and some semi-new information on Ssthris. The Bronzeheads were most probably protecting him for some reason or another somewhere within the old eastern wall or in the ruined tower. The red rat signified the rat fights that the Ezmerian mob oversaw.

Cris: “When’s the next cabal meeting? We should go talk to that guy after next meeting.”

The group of young, somewhat exhausted, and slightly sore mages decided to call it a night. As a result Excor left heading straight for his apartment to the southeast and Szoo headed back to the attic room he was staying in at the harbor across from the Rondel (a very successful seaside brothel in a reclaimed stone tower). Gornix accompanied Fauna to the central grove (basically Ezmer’s Central Park). Shortly, the pair ran across the groundskeeper who was familiar to Fauna.

So, she “scored” some yellow lotus from Anishi the groundskeeper and declared to the other two: “We’re communing with nature my friends.”

They were sitting near the center of the old menhir circle at the head of the park within sight of the city scaffolds. Anishi passed out the bumps and shortly after snorting the drug Fauna fell unconscious caught in a lotus dream. However, Gornix entered into a strange hypnotic state. As he leaned back and closed his eyes, he suffered weird visions.

His mind’s eye swirled into confusion and chaos and after what seemed forever, form began to emerge from the liquid darkness. There was blazing firelight without source in his eyes and faint rhythmic chanting rose in his ears. He could see a deep pit, a grave surrounded by a dozen blue-cloaked figures lowering another bound as a mummy in knotted cloth. Bronze masks detailed with curled locks, headbands, and smooth youthful faces covered all of their heads. The squirming mummy being lowered into the pit also bore a golden crown on his head, a king of old! His wide eyes glaring in horror from the eyeholes in his mask. The other figures were burying him alive! Gornix’s mind reeled and shot up into the air the strange blue druidic figures fading away replaced by the menhir circle under moonlight.

He could see his own body as well as that of Fauna sleeping on the grass. Without warning, his vision was propelled at tremendous speed southward over the tree tops of the grove to stop and sink into the darkness of the old amphitheater at the foot of the park. Among its shadows stood the dark outline of a wizard with a long beard, a sword at his side. Before that comparably imposing figure was a young boy, a street urchin with the impression of a pickpocket.

Me: “Nope. This isn’t Ssthris, the figure you see is humanoid not a naga.”

In silhouette, the wizard slapped the pickpocket after he presented both of his small hands as empty. Then a bright hot golden-white light began to sting his eyes. The next thing that Gornix could recall was sitting straight up dazzled by the late morning sun.  Gornix shot up and went looking for an alchemist’s shop. He had wasted valuable time. Eventually he found himself at a small out of the way shop after finding the dominant Sapphire-guilded alchemy shop too expensive.

The proprietor of this shop was a squat friendly and somewhat cheerful old man with a long white beard wearing plain brown robes fastened at the waist with a black cord. Gornix instantly recognized the proprietor as the old man who had referred him to this place just outside of the guild shop. Gornix was there to purchase some alchemist kits but the old man tried to recruit him for the Obsidian Guild. That mages’ guild was trying to get a foothold in Ezmer where the Star-Sapphire Confraternity dominated. Gornix tossed his gold devils and gold pieces onto the counter and turned to leave for his apartment.

However, he told the old man, named Wensaer, that he would consider his proposal to join the Obsidian Brotherhood. It wasn’t long before Fauna also stumbled into the very same shop also to purchase some alchemist kits.

Meanwhile, Excor had sequestered himself in his rooms and was busy crafting the copper spike. He was creating a Rod of Lightning Bolts, though with a Creator Level of 1. Gornix had intended to start formulating a new spell. Nevertheless, he would have to take a break in the middle of his research and experimentation. This was due to the cabal meeting being on the very next day.

The next day the cabal of seven, soon to be eight, convened in the clubroom at the east corner of the second floor of the Red Helm Tavern. Szoosha was present to put his mark on the group charter. Athfonia however, was conspicuously absent though when Belrae brought up her name our three (soon to be four or maybe five) heroes mentioned they had met her. Just before the meeting was to begin in earnest, Fauna thrust the Amber Bee into Bumble’s hand.

Fauna: “HERE! Take it! That thing’s trouble you should be careful and give back to your master.”

Jenn (to me, the GM): “We’re going to make sure after the meeting that she takes the bee to the Wasp. I want her to be safe.”

Fauna (to Bumble): “You know some pickpocket tried to snatch it from me on the way here? I put him to sleep though.”

Cris (Excor’s Player): “You had SLEEP this entire TIME!”

Cris: “The sleep spell!? This … You could’ve, the guy. We could’ve captured him! He wouldn’t have got away!”

Jenn: “I just forgot I had that spell.”

Cris just sighed in exasperation and throwing up his arms said, “Whatever.” Then he mumbled a little bit more under his breath.