Dawn broke over the high walls and battlements of Ezmer. The sky was aglow with deep gold and streaked 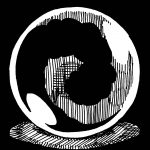 with shadowed purples, pinks, and reds. The large purple moon and its great ring was but a shadow quickly fading. Similarly the lurking dregs of the city that lurked sank back as the sun rose. The foot traffic over the cobblestone streets turned from rag pickers to early rising laborers, merchants, and then tradesmen. The filth that had spent the night fermenting in the gutters began to flow anew as fleets of chamber pots emptied and faulty jakes began to overflow with the city’s morning movement.

It was the morning of the 24th of Early Summer, Excor (played by Cris), Gornix (played by Gil), Fauna (played by Jenn), and Szoosha (played by Isis) gathered for breakfast at the Red Helm tavern. They were uncharacteristically silent during their meal as the cool salted morning air was heavier than usual. After finishing breakfast, they had uniformly decided to leave all of the items that they had stripped from Haxat’s corpse in the Cabal Room upstairs for safekeeping. In preparation of the mandatory hearing that afternoon, they agreed to meet back up in front of the Red Helm on the eve of the hour of their appointment. From there they would then swing by and “scoop up” Jirek as a friendly witness and go as a group to the sapphire guildhouse.

Gil: “We can hide or something.”

Cris: “They’ll find us! We can hide outside of the city.”

Cris: “Do you want to leave the city! ‘Cause that’s what we’ll have to do!”

Until then they were on their own and free to finish any business they had before the trial. Hence Excor went to the shop district and there he bought a silver chain. Fauna went to Wensaer’s little alchemy shop and bought an Alchemist’s Kit. The old shopkeeper kept trying to engage her in conversation and asked about the Sapphire guild. Wensaer asked if she knew Gornix, she lied and said no, the old brown-robed alchemist believed her (successful bluff). Therefore she left with her kit. Szoo put in an order at a tailor shop for a new cloak, red with gold trim. Gornix was in the cabal room copying spells later joined by Excor. Eventually came the fateful hour and they gathered in front of the Red Helm before scooting off to the college library and from there to the Sapphire Confraternity Guildhouse in Guildsman’s Square.

The Sapphire guildhouse was a large multi-story expensively masoned stone-block building with a bronze mansard roof bearing a turquoise-green patina. The guards showed them through the finely made bronze double-door into a cathedral-like main hall with a huge dragon’s skull set into the floor among the flags. Guards herded them into a side passage then through a plain wood double-door and into a high ceilinged drearily plain room with unadorned stone block walls. The only light was from three tall and narrow glass paned lancet windows with intersecting tracery crisscrossing in black over the white sunlight.

Directly under the windows and limned by the blue shafts of light beaming in from the outside was the high bench upon which the stern-faced arbiter sat and on either side of that was the council-box where 12 council members of the guild sat and heard the evidence. In front of the tall and intimidating bench stood the Bailiff, a large humorless man with a brown beard striped with white and a well-made longsword at his side. The defendants’ box was before the bailiff and under the bench, a raised platform surrounded by a high wooden railing.

To the right of that was the Advocate’s table. An advocate being a guild official that presented the defense. On the left was the Informants’ table that acted as the prosecution or investigator for the guild. Behind a short railing which separated the front of the room where the tables, the Defendants’ box, council-box, and the bench were two rows of benches in the rear. Among the sparse pew-like benches meant for an audience sat a city magistrate and a few city guards should the need of arrest arise.

Cloaked in various elaborate clothes and robes with a blue and silver motif all of the guild officials were all old Ivorans. Some bore the silver acorn symbol of the Ezmer branch, some the eight-pointed star, though most bore a combination. Among them there was not a finger, neck, chest, or wrist that did not sparkle with expensive jewelry. It was also apparent that each was a wizard of some consequence. Along the lower gallery where the seeker (as Informant) and the young mages’ Advocate and themselves would stand adjudged stood several city guardsmen at attention armed with halberds just behind should the committee find them in criminal offense.

Thus they were put in the Defendants’ Box and the gate shut and bolted behind them. The arbiter banged his gavel and addressed the defendants.

Sapphire Guild Arbiter: “This court’s purpose is to assess the evidence before them concerning the slaying of one Haxat the Greater and to see if it warrants a trial or the involvement of any other authorities including the civil. There are no charges as of yet and any necessary fines will be levied for any violations of city statute or guildlaw due to our investigation. Do YOU understand?”

The wide-eyed defendants all nodded silently.

Excor (to his compatriots): “Aww man, these guys are here to find us guilty.”

The first order of the court was the checking of their paperwork to make sure that they were all licensed mages (the licensing fees and licenses being issued by the guild of course) within the city walls. All practicing mages were required to register with the guild office and obtain a license to practice magic with certain restrictions, which can be overcome by purchasing additional licenses and/or extensions. Otherwise, a mage cannot practice any magic or cast any spells whatsoever and is subject to fines and/or imprisonment possibly even indenturement to the civil authority or the guild. Certain other things such as brewing potions and even medicines are license extensions of which the alchemists’ guild and barbers’ guilds get a taste. After a few hours it was determined the defendants had all of their paperwork in order.

However, as the court made its way to the story of the incident with Haxat it was found that Haxat did not possess the proper paperwork. Thusly, he was deemed an outlaw mage. This boded well for the defendants. Of course, the story was told, retold, and recounted ad nauseam until the committee was satisfied that they had the whole story with every mundane detail no matter how trivial as a part of the “official record”.

This continued until the council decided that they could tease out the facts which were then scrutinized for any violations particularly those that the committee could levy fines against. The long silences between each question of the court was not only frustrating but also agonizing for the defendants.

The extreme boredom of listening to the ritual monotone readings of law and legal regulation and the signing of documents made even longer by Excor’s insistence to read everything thoroughly in addition to the group’s anticipation as to their fates was definitely wearing on them (as well as their players).

Gil: “Damn. Should we just tell them everything.”

Cris: “NO! Don’t anybody tell them anything!”

Fauna: “SO you didn’t find anything right?!”

Fauna: “So we’re innocent then right?!”

Arbiter: “This was not a trial. This is a fact-finding committee to assess if anyth…”

Fauna tried to open the latched gate to the defendants’ box but a guard stopped her.

So Fauna leapt over the railing ducking the guard trying to block her way. The Bailiff shouted, “Hey you street urchin you can’t leave!”

Fauna (at the top of her lungs and with the dismissal of her hand): “That’s what your father said to your MOTHER!”

As a result the entire courtroom burst into laughter. The guards at the entrance smiled but crossed their halberds to prevent her leaving; the Bailiff was not so jovial.

Isis (face palming): “Oh No Sis! You don’t get us off the hook like THAT!”

Several hours later the proceedings finally adjourned. In conclusion the young cabal members were acquitted of any wrong-doing. They did garner some commendation for rescuing their comrade Jirek. However, they were also admonished to apprise the proper authorities instead of taking matters into their own hands if similar circumstances should arise.

Hence they burst out into the waning sun and tangerine pink striped sky of evening from the main doors. Fauna chose that time to inform her companions that an acquaintance of hers had invited them for dinner. Of course, they all agreed to go never ones to turn down a free meal. It was when she guided them to the gate into the Western Cliffs District that they became a little wary.

Gornix: “How do YOU know someone who lives here!”

Fauna: “Well, we all know Bumble!”

She remained vague in any answer she gave to any question related to their host so eventually they gave up. Excor was the only member not to grill her, he just watched her intently. Regardless of any doubts they followed her anyway. The guards let them through the gate as their names were on the list for the evening. Then gave them directions to the house.

Gornix: “Uh. Wait. You don’t know where she lives? HOW do you know this person?”

Needless to say, Fauna was not forthcoming with that information as she lead them following the guards’ directions.