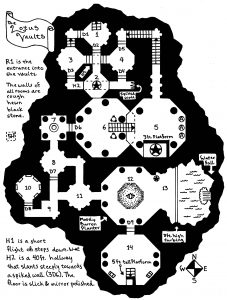 south. As the others, Fauna (played by Jenn), Szoosha (played by Isis), and Excor (played by Cris) moved slowly and carefully down the newly opened passage, Gornix peeked back through the eastern archway. He found another passage going southward. He sneered with doubt and followed the rest of the group catching up to take over lead position.

The group approached the dimly lit chamber at the end of the hallway (9 on the map). The small room flickered with firefly light from its southeast corner. Against the northwest corner and occupying all of that 5 ft.-square space was a large piece of semi-transparent yellow-orange amber. Caught within they could see an ancient warrior in scale mail, a horned open helm on his head , his axe raised, his sharpened teeth bared in an eternally frozen bestial rage.

This feature made them wary of the room and Gornix took a little time to search the floor. He found a small, hastily scrawled magic circle. It was still carrying a charge and he was sure that it summoned something when crossed. He just did not know what. Excor heedless, portable-holed the amber encased barbarian.

Gornix was determined to move on and with the barrier of the amber husk gone; he began to lead the group. Of course, he accidentally stepped directly over the magic circle activating it.

Three Lightning Bugs sprang into existence with a magic flash identical to the one that they had faced not long before. The fight was brief. Gornix turned the tide early with a cone of fire that killed two and Szoo and Excor pummeled the last to death with a fire ray and Chrono-Missile. That taken care of they proceeded to the end of the short passage.

There they found a rusty iron door with a magic rune carefully inscribed upon its face to the north (D8). Its key lock mechanism was jammed and badly rusted. Gornix used his knowledge of Magical Script to identify the rune and its purpose. He knew that if the door was attacked in any way that it would summon a giant inferior water elemental.

Cris: “aw man! If we activate that thing we’re all dead! DEAD! Look at where we’re at! A giant water elemental will fill this place up, engulf us, we’ll all drown!”

They stood there puzzled for a little while and very wary of the door. The players even checked their sheets to see who could swim. Only Fauna had the skill.

Gil: “There is definitely something worth it behind that door.”

They searched the old iron door for the depression that would allow the Amber Bee to open it as it had others previously. However, they found that it did not have this. Gornix and Excor decided to do a synergized check for traps. They scoured the surface of the door and its edges for any sign at all.

They found nothing aside from the rune. So Excor tried using the Knock spell from his platinum key. However, the door was firmly jammed shut and simply couldn’t be opened without the use of force. In response, Gornix had the bright idea to just “ghost step through”.

Through the small portal, they could see nothing but darkness. Therefore, Szoo shoved his flaming naginata through it allowing them to see inside via the flame light. The chamber beyond was another octagonal chamber and very plain with a flat ceiling each of its walls lined with dark and very dusty wooden shelves (10). They could see several jars of what appeared to be seeds and maybe some preserved honey.

Excited by this sudden treasure trove Excor and Gornix ghost stepped into the chamber. Excor cast illuminate. They proceeded to loot the place shoving everything into the portable hole. The group managed to snatch a single jar of grey lotus honey, 2 jars of golden lotus honey, 1 jar of yellow lotus honey, and 1 of purple. They also found 3 jars of lotus seeds with grey, blue, and black respectively. With that they also found 4 jars of pure lotus pollen; purple, red, blue, and yellow. The pair also found an ancient rotting scroll case hidden amongst the shelves and holed that up without opening it. They exited via ghost step.

They backtracked with Gornix in the lead. He slowly moved towards the next chamber at the end of the hall just above the amber warrior room the passage opening to the east. This chamber (11 on the map) was lit by several firefly ambers in the wall niches and seemed very plain save for the white tiled floor. Other than that, the room was completely empty. He was sure that there were no traps in here so he lead them through noticing however that there were weapon nicks everywhere along the walls and even on the floor.

The group moved through into the next connecting chamber through a tall deep archway. There may have been a door ages ago but there was no trace left. The room before them was enormous and very brightly lit as if by the sun itself. All four of the mages were gazing in wonder from the archway.

Within the room had a domed ceiling its apex at 35 ft. tiled with a mosaic of a sparsely clouded blue sky. The floor tiled with polished white marble, the thick black pillars were lotus themed, and gold leafed with chevron patterns. They could see what looked like a miniature sun orbiting around the inside of the dome cascading the room with pure daylight. At the center of the room was a barren planter sunk into the floor. However growing in that was a 20 ft. tall woody lotus flower of a kind unknown to any of them. Its large brown petals were shriveled and leather like, and its woody bole was wart covered and twisted.

In the south wall were a recess and a door cut from the same black stone. Standing in the north where the room opened into a natural cavern was a golden statue of a bee about the half the height of a man. Within that portion of the area, there was a small waterfall to the east pouring down a wall of uncut natural stone into a large curbed basin or cistern. They could smell the strong scent of fresh, clean moisture and the musk of old damp wood.

What concerned them and impeded their progress was the giant brown lotus. They were hesitant to trespass on its territory. Therefore, Fauna used her wilderness lore to surmise that the plant was indeed dead, she thought. Gornix however knew through his monster lore that the Lotus was not dead but dormant and was some sort of mutation caused by the nexus. He guessed that they must have been near the nexus that fueled this place. Gornix cast Breath without Air on himself and made sure his shield item was activated. They stood at the archway looking in. None of them wanted to be the first.

Gornix: “I have Breath without Air and Shield so f@#k it!”

Before the brash Gornix moved in towards the giant lotus, the druidess was able to discern that the plant was indeed an unnatural monster and was very much alive. She also was able to locate the rest of the cabal whom were still alive and close. In addition, the monstrous plant was growing directly on top of the nexus point. Gornix stepped in. With the painful creaking of wood, the monster plant turned and opened its petals like jaws.

Fauna cast Lightning Bolt from the arch dealing little damage. Excor cast Mage Armor on himself. Szoo hurled fire at the creature singing it a little bit. The mouth of the giant lotus turned towards Excor and Gornix unleashing a blast of woody seeds as projectiles. Excor dodged while Gornix attempted but failed losing his Shield.

Fauna lobbed another Lightning Bolt again dealing a little damage. Szoo again hurled fire at the creature barely singing it. Suddenly the soil in the planter erupted and a root like a tentacle whipped at Gornix. The White Lotus Wizard used his battle magic to intercept its attack with Force Ram. His spell smashed into the bole shattering bark and splitting the tentacle.

Excor cast Lightning Bolt at the creature dealing a little damage. Szoo hurled more fire dealing some damage this time but the plant had still not caught fire. Another root-tentacle erupted from the soil and snapped Excor wrapping around his waist and grappling him in a crushing noose. Gornix successfully cast Amplify Magic at it.

Another root exploded from the dark soil narrowly missing Szoo.

Fauna cast another Lightning Bolt this time the magic amplified she shattered bark and split wood nearly killing the creature. Gornix followed up with Force Ram smashing the monster into splinters. After they were sure it was dead, they spread out to explore the gigantic day lit chamber.

Excor wandered over to the gold bee statue. Formed by pressing and welding hundreds maybe thousands of dead gold bee husks together it was impressive. After searching it, he found an old note rolled and stuffed into a small crevice. He read it after casting Comprehend Languages. It read:

I have faith that you have found my note be that only you, my love, would in our little place. I am confident that we will soon be together as you have the bee to guide you. Though I still fear for you as the barbarians near the temple after trampling the capital. But I still pray that my yearning will be ended and we will be together finally at the glorious spire.

The signature had long since disintegrated and just after finishing the note the ancient parchment crumbled to dust in his hands.

Excor bagged the gold bee statue. Meanwhile Gornix turned his attentions to the dead lotus. Inspecting the stump, he found the control obelisk within as the plant had grown over and around it encapsulating it. After all were satisfied that they couldn’t and probably shouldn’t bag the miniature sun, mostly Excor objected, they turned their collective attentions southward towards the black door.

This recessed door was of the same solid black stone from which most of this place had been chiseled (D9). It was 5 ft. wide and close to 12 ft. tall. Carved on the dull surface a couchant lion with a flame burring over its head. There was a small niche in the shape of the Amber Bee just below that.

Excor unwilling to open the door himself tossed the Amber Bee to Gornix who unhesitatingly opened it.