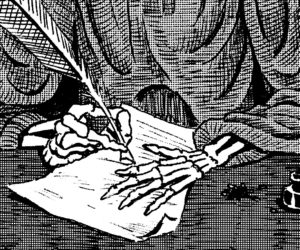 adventuring group. This includes how this tried and true combination of classes helped to shape the core of the Dice & Glory game system. It’s not a history lesson or based in anything more than experience and opinion; just my two-cents.

The bedrock of most fantasy RPG sessions is the Standard Party. This Standard Party consists of the Fighter, Mage, Thief, Healer class combo. That is four members of the group are playing characters of one of the aforementioned character classes. This combination of classes was born along with roleplaying games, consisting of primarily the Fighter and Mage classes. These shortly followed by the latter two.

This formula for group formation evolved out of necessity. It was shaped by the type of game that was dominant at the time of their creation. The Mage and Fighter evolved from the transition from war-game to the first tabletop roleplaying games. They serve as the group’s main firepower with the mage in the rear ranks and the fighter in the front.

The Thief came to be when games moved further from pure strategy and warfare into adventuring and dungeoneering. The thief’s place is either firing a crossbow bolt from the shadows or trying to sneak around for some good ole backstabbin’. They also often have the skills to try to carry out another task while the others hold off threats.

The Healer on the other hand is a support type character. They may have a certain level of combat ability but nowhere close to the Fighter. They may also have some interesting skills akin to the thief or even a few spells up their sleeves like the mage. However their primary purpose is healing the fighter and the others when necessary. The Healer commonly takes the shape of a priest/priestess or other holy type person, traditionally a Cleric.

Four Corners of the Square

These four (Fighter, Mage, Thief, Healer) are the core of the traditional RPG Player Character adventuring group. This type of group is equipped to deal with most challenges that have been formulated within the roleplaying hobby. They can meet most monsters or guardians or a challenge on par with their character levels blow for blow. These adventurers can tackle most barriers to their progress like traps and locked doors because of the thief. They have an extended endurance granted by the healer, and a few surprises in the form of the mage’s magic.

The Advantages of the Well-Balanced Group

This type of party is the easiest for Game Masters from the most experienced to the least to handle. There is an overabundance of material for GM’s (of all skill levels) where these types of groups are concerned. Often the Standard Party is referred to in the materials as “a well-balanced group”.

This allows the Game-Master to be able to make minor predictions of the outcomes of certain encounters with a reasonable amount of accuracy. The only factor in this foresight would be the randomness of the dice (to me the fun part). Certain game systems make attempts to regulate the randomness of dice in various ways. But I’m not concerned with those at the moment.

This basic type of foresight allows the GM to construct a story-like session, work from lists and such specifically crafted for their players, and to improvise when necessary. All of this with a fair amount of certainty. In a basic sense, the game is easier to run. You can even add in extra less specialized or more specialized characters to the core group.

Of course, this grants the Johnny-come-lately’s a more diverse choice concerning character class. Therefore, it has a disadvantage for the players if they desire a more variegated choice. Moreover, sometimes players that are the core group don’t want to play the traditional types of adventurers. Or they may be unwilling to serve their stereotypical group role leaving one or others wide open (often the mage). This may necessitate the selection of an unconventional mage type character to compensate.

The Core Group helped to shape the range of base character classes (or class types) in the Dice & Glory game system. First, I tackled the range of choice of course keeping the core classes: Fighter, Mage, and Thief, which I generalized into the Rogue but the Healer was split by more generalization into a number of possible different class types.

These other class types were add-ons but could also be a part of the “core” in certain types of campaigns. The new class types I added being: Adventurer, Brick, Clergy, and the Psychic (a classic add-on class in other fantasy games and an alternative to a mage in sci-fi settings). Potentially any of these could be included as a core member or substitution. For example the Brick was designed to be tougher than the fighter but with a focus on enduring damage rather than dealing it. A Brick was intended to be the defense for such rear guard character classes as the trad Mage.

The range of variations on each of these basic classes for Dice & Glory is potentially endless and can be used to assemble an Off-Brand adventuring group more often than not. This allows maximum player choice but may put more stress on the GM. The GM gains a steeper learning curve and needs time to acquaint themselves with the individual characters and their abilities. This typically by testing them with minor situations and simple mooks, glass-canons, and what-have-you.

This difficulty for the GM and expansion of choice to near infinity necessitated that the experience point system (I chose to go with a point and spend system) give difficulty ranks to creatures, situations, and barriers as well as give specific challenge values to certain Player actions. It gives the players options to increase their Experience Points (XP) gains to adjust for any challenges that may slightly exceed their character capabilities in the potential future.

In summation, an Off-Brand Group is more difficult for a GM to handle than a Standard Party. However, players have more class options and the potential for off-kilter and non-standard adventures are greater. This necessitates an adjustment period, which can have its own advantages.

A Game-Master when dealing with a non-standard party needs to delve into exploration sessions during an extended adjustment period. During this time, the PCs find and settle into their roles and the GM tests, prods, and poke the characters and group. This so as to find their strengths as well as their weaknesses. Personally I have found this adds a certain richness to the game. An ability that a core group ready to launch from session-one lacks.

These sessions can also have a trial-by-fire effect on the group. Uniting the players and hardening their resolve to play their characters through hardship. This odd group can be pretty far from the standard model altering the paths of adventure onto new avenues. The GM will find their alteration of standard adventures to fit the group as they get to know the characters and the overall group dynamic can take them far from the beaten track.

The Standard Core Group found throughout the history and the present of fantasy RPGs is a tried and true model for assembling adventuring groups. Nevertheless, it can be a little restricting and maybe a little boring as well. However, the class choice of a PC group influences the shape of the adventure that they can handle and concerning GM prognostication. The character composition of the group alters everything about the game and in certain instances can unbalance a ruleset not designed or capable of handling them. Although an Off-Brand group that is wholly off model is a challenge to the GM it can also take the game to strange and interesting new places. So GM’s select your medium (ruleset) carefully and don’t shy away from unconventional groups.

Note that Race in RPGs is very similar in effect to Character Class and though it can have an effect on the game similar to class, it is often not as severe. The same issues can arise: game balance, player choice, and GM difficulty but if they are well designed these are mitigated by the setting and the GM themselves.

The Cabal of Eight will return next week.