The great purple moon and its ring gave way in the gloaming to the gold-red then orange-white of dawn. 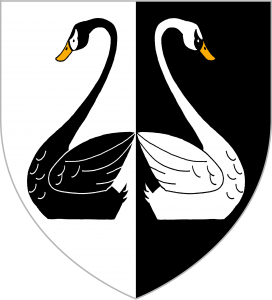 The sun rose over the far off farmhouses and laborers’ hovels as the sky went blue then shone on the banners of Farmers’ Cross Lodge as they unfurled over the front gates. The four mages of the cabal walked into the tavern side of the lodge from the reception area after coming down from their rooms on the upper floors.

They saw the Blue Stranger sitting at the first table beyond the door and spread out before him was a feast of roasted ribs, steaming vegetables and heaps of fresh flatbread. It smelled sweet, savory, exquisite. He motioned for the mages to join him addressing Gornix (played by Gil) by name. Excor (played by Cris), Fauna (played by Jenn), and Szoosha (played by Isis) shot him dirty looks. They joined the stranger regardless that they already knew to be the blue dragon in disguise.

After Fauna and Szoo started eating the Blue Stranger asked, “How’s the food” he had not touched any of it.

Gil (horrified): “It’s POISONED! I didn’t eat anything! Wait. Would he…”

Cris: “No. He’s a dragon, hell it is a blue dragon…No. We’re eating our oxen.” He shrugged. Excor dug into the ribs, they were as good as they smelled.

The Blue Stranger smirked in entertainment at Gornix’s and Szoo’s wave of initial horror. Hence the mages and the dragon finished their meal under a cloud of weird tension. The Blue Stranger was the first to take his leave and then the mages left after and tried to refocus on their mission.

By late morning, the mages were circulating amongst the flood of wagons, merchants, and farmers that were making their way through the crossroads with destinations in all eight directions, some close by others as far away as Ezmer. Szoosha kept a vigil at the front gates, namely due to his ability to remain in direct summer sun for extended periods of time and keen eyesight, for the arrival of their target.

Suddenly, Szoo caught glimpse of a cloud of dust riding up from the south cross. He thought its size indicating the caravan that they were waiting for. It wasn’t long before the Black-scaled Naga’s sharp vision picked out a caravan of a covered supply wagon, 3 armored wagons, all protected by a small force of horsemen led by a knight bearing a white longshield with a black swan upon it.

Cris: “You have to come get and tell us.”

Excor was wending his way through a dusty crowd to a large covered area on the east side of the lodge building where most were parking their wagons and tending their animals. He was trying to find Corje and the wagon. It wasn’t long before he bumped into him, the cloaked driver had two others with him.

Corje introduced them as “reinforcements” for the mission. Excor was less than thrilled and quickly made an excuse to get away from the wagon-driver-probably-assassin-in-disguise and his similarly dressed two pals. They were looking for Fauna. The only positive as far as he saw it was that Corje had managed to replace the oxen on the wagon.

Utterly paranoid and a little exhausted already, Excor quickly retreated to his tiny corner room on the third floor. To try to gain a little “insight” into his and his companions’ situation he decided to take a dose of some yellow lotus that he had lifted from Fauna without her knowledge. Its quality was a little higher than expected. As a result he fell into a drug-induced coma. As he collapsed onto the sleeping mat, an intense vision ripped through his brain, a chaos of shattering wood, smashing stones, a blue dragon and roaring lightning, and a black mace whistling through the air.

Fauna was wandering aimlessly around the lodge-enclosure talking to the occasional stranger that might peak her interest. Eventually Corje and his two allies found her.

Corje: “There you are little sister! I’ve made contact with our two allies!” He introduced them but Fauna did not pay attention to their names.

He went on about how they were ready to deal a blow for “our good lady” and if need be do it here if the chance should present itself “even at the cost of all our lives”. Fauna humored them and mentioned it would be a good idea for her to track down her friends and formulate a plan before Corje and his compatriots should do anything. Meanwhile it would be best if they would get the wagon ready to leave at a moment’s notice. She parted ways with them and disappeared into the road-weary press of the yard.

At the same time, Gornix joined Szoo as the caravan the naga was spotting rumbled through the gates, a blast of yellow dust preceding them. The three armored wagons had shutters over the windows and thus any passengers hidden from view. On each wagon were a driver and a crossbowman. The wagons also bore the pennants of the Iron Wheels of Ezmer. The emblem of the Iron Wheels being an iron grey wagon wheel against a crimson field. The horsemen on the other hand bore the arms of the Yellow Spears on their wooden longshields, wore chainmail shirts with steel open helms and were armed with light lances. Their heraldry being a yellow diamond-headed spear against a field of orange and azure bent sinister. Leading the whole lot was a white knight in a checkered surcoat, atop his white great helm was a carved wooden black swan.

The Black Swan/White Knight was as a towering and intimidating figure as his brother in full regalia. However, when he removed his helmet he was the spitting image though his brow was more prominent and his chin stronger. He also had a wide scar across his face and another across his lips to his chin. He was very systematic in habit, the stripping down of his equipment even his dismount. At his hip was a great sword with a gleaming golden grip and pommel.

The pair of mages tried to approach the White Knight but he kept them at a distance while he stowed his equipment. Even when he was finished, he arrogantly brushed off any attempt to engage him. Therefore, Gornix and Szoo were trying to gather as much info as they could just hanging around and keeping an eye out on the whole scene. Gornix spotted out someone moving between the armored carriages but he could only catch a glimpse of a long wormy tail.

Eventually Fauna met up with the pair and without waiting for Excor, who was still unconscious, they tried to formulate a plan. They would wait for the horsemen and most of the guards to go into the tavern and then Szoo would set the wheels of the carriages on fire so they couldn’t get away and then Gornix would use his Summon Elemental IV spell to summon a giant earth elemental to cause a diversion. After that, Excor could keep guard with his magic and Fauna and her crew could move in with their daggers to finish off the job. They hoped they could escape in the ensuing chaos.

The mages held and waited while the carriages were parked. After they had been parked near the front wall in their own special cordoned off area, Fauna went to scoop up her people and Excor. She soon found Excor completely knocked out and realized he would be out for quite some time. However with Corje’s help she dragged him to the wagon.

Not long after the carriages had been parked Sir Illin, the White Swan/Black Knight, met his twin brother with a roar of a greeting and they started to the tavern. The dismounted mercenaries and crossbowmen followed. Left behind the drivers tended the carriages and draft animals. The passengers within had failed to disembark. It was still early in the afternoon.

Isis: “Can I BURN things now?”

Szoosha kept his distance and using the minimal somatic components to remain unseen set the first two carriages wheels ablaze. Unfortunately when he targeted the third carriages wheels, the magic got away from him and nearby piles of hay and the supply wagon burst into flames letting loose a massive fireball into the sky.

The Lodge guards were panicking and ran to the well attempting to establish a bucket line. Meanwhile, Gornix cast his spell at the rear of the lodge. As a result, a giant semi-humanoid earth elemental rose from the ground.

The elemental giant immediately smashed its massive fists into the corner of the lodge building tearing out an entire corner. It had completely taken out what had been Excor’s room. Then the creature swept its arm across some nearby guards killing them all.

Isis: “This is not going well.”

Fauna: “Corje! Get the WAGON!”

The Black and White Swans ran from the tavern weapons drawn. They gathered up their mounts and ushered the last remaining armored wagon to the gates. So Gornix approached as close as he dared and shouted to the White Swan/Black Knight. The knight shouted back that if he wanted to caravan with them they were pulling out NOW. Four of the horsed lancers were already galloping through the gates. The cabal’s wagon pulled up with the unconscious Excor in back along with the pair of cloaked men he had met earlier that day.

Suddenly, seemingly out of nowhere a very fancy blue coach with a train of six horses rode up to the gates from the yard driven by a very familiar hunchback. The Blue Stranger opened the door into the vehicle and shouted to Gornix to get in. He would also be joining their little wagon train.

Gornix of course leapt right into the Blue Stranger’s coach followed by Fauna and a reluctant Szoo. In a storm of chaos and fire, the makeshift caravan fled north from Farmers’ Cross.