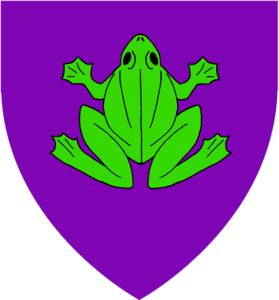 The young elementalist shot erect and took a look around. The calm morning sea surrounded him on three sides and the air was cool and briny. He was on deck of a three-masted High Born Thrahssk’ Tradesman that was readying to disembark. Needless to say, he was greatly relieved that the ship had yet to set sail.

Szoosha kept trying to explain himself, for some reason, and slowly backed away from the sailor towards the gangplank. This went on for a few minutes.

Jenn: “You know you can just go right? Why’re you trying to explain yourself?”

Szoosha rushed off the ship hurried back to his quarters just before the gangplank was raised. He shared the attic room of a boarding house at the far west end of the Harbor District near the Rondel, a large round stone tower formerly a lighthouse currently the city’s largest brothel. He ducked in, locked the door behind him, and hid under his bed determined to stay there until the next scheduled Cabal meeting on the evening of the 21st of Early Summer, two days hence.

Disappointed that the firepower he had hoped to add to the crew had just run away the bewildered High Born sailor shrugged. At least he didn’t have to pay a finder’s fee for an unsigned contract.

Across town, Excor (played by Cris) finished his spell research (for the Mass tandem spell) at his apartment. Meanwhile Gornix (played by Gil) was also deep into arcane research at his place though he had two more days to go before he had a working spell. Fauna (played by Jenn) spent the day, the 19th of Early Summer, “bumming around the park”.

The evening of the cabal meeting came, the 21st of Early Summer, the previous day spent by all resting, researching, or hiding. They again found themselves around the table in the cramped and dingy club room above the Red Helm Tavern. The cabal leader and his left-hand man however were absent. Jirek, the acting secretary, told the group that Belrae and Riahm were away on an expedition accompanying a pair of Bardic College curators into the Red Waste. They’ll be back in two weeks.  Therefore Excor put forth a motion to put electing an Interim Cabal Leader on itinerary for the next meeting (on the 28th of Early Summer). It passed unanimously.

At first, the meeting began to fall apart as Gornix was eager to get back to his spell research, he had to take a break to make the meeting, and Bumble was curiously silent. Excor and Szoo started a collection among the present cabal members to fund their plan to train rats as to enter the rat fights under the old wall. Jirek was interested but was bust when it came to actual funds.  So he volunteered to help them any way he could for a small cut of the “projected” winnings. However, Fauna absolutely objected, “I think its SICK”. Though she pounded her fist on the table, Excor, Szoo, and Jirek were undaunted.

Finally, the group began to chat about the things they had yet to accomplish. Of course, each mage was interested in something different. Excor was still curious about Ssthris and the bounty on his head (see The Cabal of Eight Pts. 6, 7, 8).

Gornix: “I want that gold bee back, the amber…”

So, conceding to Excor’s outrage Gornix brought up Haxat (see The Cabal of Eight Pt.17: Enter the Wasp). Gornix noticed out of the corner of his eye, that Jirek winced at that name.

Gornix (pointing at Jirek): “SO what do you KNOW!?” He jumped up and everything.

With Gornix leading the charge the entire group began grilling the slight scribe. It didn’t take long for the Scribe of Arebas (Jirek) to cave and reveal the location of Haxat’s hideout.  The place was an empty warehouse, near the lumberyard in the Harbor District. An inherited property of the scrawny scrivener. The demon summoner had promised to teach him some of the more potent spells in his repertoire.

Excor: “Damn! We could use that place to house our rats after we get rid of Haxat!”

Gornix began heading back to his apartment to continue formulating his spell (Force Ram). The salt lotus wizard brought Jirek along as assistant. The scribe was terrified that Haxat would know that he had been betrayed. Otherwise he would have slept in the cabal room.

About half way to Gornix’s apartment they realized that an imp was following them. They spent the better part of the night running circles throughout the city in an effort to at least confuse the small demon but to no avail. Eventually Gornix had an idea and the pair ducked into a small side street that ran behind his apartment building. Gornix cast Ghost Step on them both and they walked in through the back wall finally losing their tail.

Szoo on the other hand had gone to the taproom of the Red Helm to get a beer and try to relax. He took a seat at a table with Excor in the theater to listen to the troubadour who was on stage. He was singing the well-worn saga of the Slayers of the Golden Tower, terribly. As a result, Szoo left Excor’s table to talk to Draega Skullshine whom he spotted buzzing up to the bar. The young naga thought to ply the flighty publican for some information. However, Draega charmed info about Jirek and Haxat from Szoo. Because of this sudden and foreseeable turn-around, Szoosha suffered an attack of paranoia, panicked, and fled back to his room in the harbor district.

Meanwhile, Excor spotted a town guard leaning against the entryway to the theater eyeballing him, the guard immediately left when he realized that he’d been made. Excor kept drinking but kept an eye out over his ale for anything else out of place.

After the meeting, Fauna parted company quickly and without a word. She rushed towards the city center careful to stay hidden. The druidess was careful to make sure that friend or foe did not follow her. She stealthily slipped into the Grove, the city’s central park, and crept into the old amphitheater under cover of darkness. There she waited nervously until midnight always cautious to stay hidden. She was to meet up with the druidic cult, the Brotherhood of the Rope, for her initiation into their organization through the ordeal of the threefold-death.