The cabal’s newest member had just made his mark on the contract. Ilna (aka Bumble) jerkily leaned 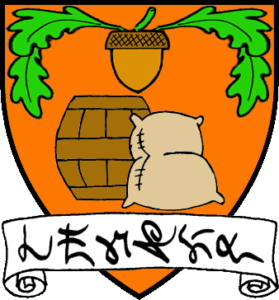 over the octagonal meeting table to shake Szoosha’s scaly hand knocking over her own ale. In a clumsy effort at a greeting Bumble also casually mentioned that her ‘father has two Naga slaves’. She stopped suddenly when she realized what she was coming out of her mouth.

Excor (Played by Cris) raised a toast to new members noting that the Ferenoi, Athfonia (played by Perla), was strangely absent. All raised their cups in Szoo’s honor and drank up.

Belrae (the cabal leader): “I suppose all of you know it’s been declared a Dragon Summer this season?”

The cabal leader continued to explain after Excor and Gornix’s inquiries as to exactly what is a Dragon Summer. Basically, the summer is unusually hot and humid with frequent thunderstorms occurring just off shore. It occurs every 8 years or so, the cycle is not consistent. It’s also dragon mating season when the Whers of the Southland tend to congregate on and around Ezmeria especially the Ezmerian Headland.

Cris and Gil’s heads bobbed vacuously acknowledging the info-dump as probably did their characters. Cris consulted his notes.

Excor (to Belrae): “Hey, isn’t this an election year? So what’s going on with that?”

The political body of Ezmeria is housed entirely within the city walls save for the administrators of the Breadbasket and the surrounding terrain. The body politic is composed of the Electorate (citizens with the power to cast votes), a small body of representatives from the Breadbasket, and two of what can be called Political Parties.

These parties are the Gold Sashes and the Oaks. The Gold Sashes, supported by the Golden Devil West Company, represent business interests and rich merchants. The Oaks pander to the majority landowners but money and contributions tend to direct their politics. As the Oaks are concerned with placating the poor with bread, they typically have the support of the Breadbasket.

Belrae (somewhat sternly): “Neither. Stay out of politics.”

Belrae went on to mention that a Blackship of the Deadlands is at port in the Slavers’ Castle. Aboard is a gladiator of renown, Skullbash, and his manager. It was obvious that he and Riahm were curious about the Deadlander manager and even half-jokingly mentioned something about ‘purchasing a couple of zombies’. However, their joke fell flat.

Gornix also mentioned his run-in with Wensaer the Obsidian Guild alchemist and asked about the Sapphire guild. Belrae and the rest agreed that a guild contact would be great but the Sapphire guild, which is typically restricted to nobility or the like, has a traditional and tight grip on the city.

Smalltalk ensued as no one else seemed to have any information of note until Excor, Gornix, and Fauna began complaining of being broke and looking for a job. Belrae told them that he knew of one Afsik the strange, an antiquarian in the Harbor District, who was looking for some mages to hire. But for what he didn’t know. Although, he had it on good authority that Afsik paid well. He gave the three mages the antiquarian’s address.

As the meeting began to wind down Belrae stood and made an announcement that he and Riahm will be absent the next meeting (the meeting of the 21st of Early Summer) and possibly the next as they are joining the College Expedition into the Red Waste beyond the Southern Grasslands to investigate some ruins. Belrae adjourns the meeting.

Before the cabal’s young leader and his compatriot can even rise to leave Excor & Gornix get Riahm to exchange some spells from his grimoire. The plucky pair traded the bard/sorcerer Summon Elemental IV for Invisibility I. He gave them Appraise & Far Hand for Magic Globe & Clairvoyance. When Belrae noticed, he acquired the Lightning Bolt spell in exchange for Potion Formula: Slumber.

Meanwhile, Fauna asked Bumble to join her at the bar. Ilna bounced in her seat and snorted in excitement. Downstairs, Szoo joined Bumble and Fauna as they bellied up to the board. Fauna asked after Bumble’s master as the ale was served. Ilna happily told Fauna his name, ’Xanto some people call him the Wasp I guess’. He had apparently found himself in some sort of trouble somewhere far northeast of the city in a town called Skullhead. Her father was sheltering him on condition of her apprenticeship.

Cris: “OF COURSE it is! You didn’t think her master was anyone else did you?”

Later, after copying spells, and as Jirek was packing his secretarial kit away, Excor invited the young scribe to drinks. After getting a table in the theater and getting a ‘decent but not expensive’ bottle of wine Excor led Jirek into a conversation. A minstrel was on stage singing a fine rendition of the Ballad of Redtooth. It was a very prosaic song prolific throughout the Westlands and Southlands.

In the course of their conversation, Excor found out about Jirek’s lack of family and his inheritance, which consisted of a completely empty storehouse at the far eastern section of the Harbor District. Excor began chatting him up about getting access to the college library his original intention behind the invitation. One successful Charm roll later and Jirek said to get a hold of him in a few days and maybe he can see about doing something for him.

Excor (to Jirek while preemptively refilling his cup): “Have some more wine my friend.”

Meanwhile at the bar, Fauna and Szoo continued to chat up Bumble who volunteered that her father had a substantial collection of books in his library. It wasn’t long after that, by coincidence or not, that Gornix strolled up. Bumble began to clumsily flirt with the young Ivoran wizard, he flirted back (using his +5 Bea and CHA to his advantage) and the tipsy girl was smitten.

It was not long before he seduced her into taking all three of them back to her family’s place and into her father’s library. Outside of the tavern she hailed a coach to the other mages’ elation and they rode ‘in style’ to the Western Cliffs District past the security gate and wall up to a large stone block manor complete with footmen awaiting her arrival.

Less than an hour later in the private library of the Nezorik family manor the young mages were already eyeballing the spines of the books that crowded the packed shelves of the lone bookcase as Bumble lighted the candelabras.  Fauna sensed a magic tome and pointed it out to Gornix.

Gornix lifted the hefty leather-bound book from its bowed shelf.  He cracked open the large book and tried to decipher the markings, which were in magic script on the first page but failed. Fauna was able to make out an enchanted signature next to a sigil, which read Vordan the Magnificent.

Bumble had been telling them that her father couldn’t read but enjoyed having the luxury of books. He enjoyed showing off the illustrations and illuminated texts to his guests. When she realized nobody was listening she turned from the tapers. She saw her friends were hunched over a select tome.

She squeezed between them and said, “I haven’t seen this one before”. Before those words had even completely passed her lips, she poked the magic sigil on the very first page with her plump finger.  Immediately a bolt of blue energy struck her in the head and she collapsed to the floor.