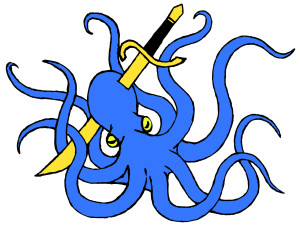 Xuun, dirty, and not only foul from the slimy heat of the swamp but Nezor had spent about a day wading in the murk searching for the sunken chests in the muddy bottom. He had recovered both the smaller oak chest and the other chest the contents of which Zevor supposedly had already divided amongst the robbers. The mithral chest was lost.

Fortunately after a day had passed Gator-tooth had rowed back to the campsite on a newly built log-raft. He had come back for his promised pay. After a treasure exchanged hands he transported the surviving trio back to the outskirts of the city by the old gristmill.

The oak chest had contained: 10 blue-steel great axes with a single large black pearl in each of the pommels, 40 pigs of blood-metal, 10 lbs. of raw mother of pearl, a poor quality lacquered turquoise figurine of an armored warrior, and a high quality bronze-wood jar with a dragon carved over its face. In the other chest was a small superior quality midnight steel box with mithral rivets and hardware, a master book lot, a carven alexandrite skull which was given to Gator-tooth as payment, a superior quality dragon-metal tool hammer with a dragon-bone handle, and a high quality manticore hide cloak. Needless to say the hill-giant was a little miffed that such a haul had escaped his sight when shares had been split before the hoods had attacked.

As soon as the three hit town they opted for a quick drink at the Whiskey Troll tavern and Phenox after taking one of the blue-steel great axes and the dragon-metal hammer as his own left to destination unknown. Cantra took possession of the cloak and left for her apartment for “a bath”. Nezor mentioned before she left that he was going to the bazaar to lay out a carpet and hawk the wares that were still up for shares; the mother of pearl, the bronze-wood jar, the turquoise figurine, the booklot, the midnight steel chest, the blood metal pigs, and the rest of the blue-steel axes.

It was in the noisy, over-crowded, and bustling marketplace that Cantra found the giant when she came looking a few hours later. He was haggling with a group of bullywugs (frog-men) on the price of one of the blue-steel axes. He eventually let them have one for way below its actual market value as the entirety of their coin amounted to only a few hundred gold pieces. She sat with Hill-lander for a couple of more hours making sure he wouldn’t attempt to cheat her out of her share of the profits. Not long after Cantra had settled in that a mage wrapped in brown robes with an eye insignia on his chest walked up to the giant.

The mage bought all of the blood metal pigs for 400 gp. Cantra had initially failed to properly assess the value of the small bars it later dawned on her that each 2 lb. bar was worth around 20,000 gold pieces! Nezor just shrugged. Later, the giant successfully sold the booklot which Cantra was able to figure out the proper value of, to a man named Korfin whom passed along an address to where the books were to be delivered. It was a C.O.D.-type of deal. Just before packing up shop, Nezor managed to sell the mother of pearl, the figurine, and the bronze-wood jar for a combined 175 gp.

All three met back up that evening at the Whiskey Troll for a meal and several drinks after eating they would deliver the books to the address provided. Later that night it was Nezor who stumbled back some 3,075 gp richer. Phenox had stayed in the courtyard for some wine with the mage, for that is what Korfin turned out to be. Cantra buzzed away to her apartment again.

Nezor was about halfway back to the tavern when he decided to wander the streets and “do some good” if he spotted any “villains” about. It wasn’t long before the giant heard, “Die!” from a dark alley. Immediately he was beset by half-a-dozen black-hoods with a ratling shooting at him with a crossbow from the rooftops. The hill giant made short work of three of the thugs with a single sweep of his club sending their fellows fleeing. The ratling was suddenly nowhere in sight. Nezor decided to make a bee-line back to the tavern.

Back in the gossamer yellow glow of lamp-light in the pipe-smoke-fog of the Whiskey Troll Nezor settled in with a bucket of ale and a pitcher of whiskey. During the course of drinking himself unconscious Nezor talked to an older human in chainmail who, “thought it was a little suspicious that they went into the swamp with you guys and you’re the only ones that came back.” He was apparently a compadre of Zevor and his rogues. Nezor had just shrugged it off as the man stormed away. In the course of the night Nezor had put out the word to the trollish bar-maids that he had a midnight steel box for sale. When word reached the faun bartender he seemed intrigued but nothing came of it before the hill giant passed out.

When he came to, his friends were at the table, Phenox had sprung for breakfast. The three sat in the place for almost the entire day and by early evening were contemplating what should their next caper be when the slaver Corvo-Doom entered with his small entourage. It was after about a half-an-hour or so when the Brighthouse Witch-Hunters clattered into the place.

It was the same gaggle of fighters that Nezor had seen in the marketplace before the venture into the marsh. However, this time they were led by a Creschan (judging by his dark skin) cleric with the image of blue octopus impaled by a golden sword on his white Acton. At his side was a paladin bearing a golden broadsword and a gold great helm. Corvo-Doom with the unmistakable air of both hostility and over-bearing arrogance shouted something in Hyvalian at them almost as soon as they had stated their purpose to the bar. The golden-helmed paladin was the one that seemed to understand the gravity of the insult and seemed determined to face down the powerful slaver right there. The rest of the witch-hunters likewise readied their weapons and began to slowly surround the slaver’s entourage. Corvo-Doom’s right hand man which Nezor had seen act as his translator before shouted out, “A gold talon to any souls brave enough to help my lord!”

Phenox drew his weapons and Cantra hers. They both looked to the giant who didn’t seem like he was going to do anything. Phenox tried to convince him to join on the slaver’s side against the witch-hunters if for nothing “for the money!” But Nezor was determined to sit it out since the Brighthouse were supposed to be the “good guys”. The hill-giant took a healthy gulp of cheap whiskey.