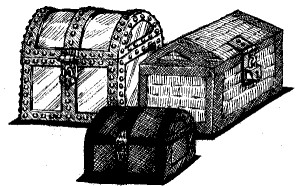 more worse for the wear. At the head of the line was Zevor with the hill-giant Nezor on his heels, a large chest tucked under each arm. The reassuring and strong scent of heavily spiced stew met the raw nostrils of the exhausted adventurers. The 3 rogues Zevor had brought along were hefting a third chest, an oak chest, smaller than the previous two but still substantial, on a creaking pole-carriage followed by the mage. Pulling up the rear were the deathgrin Cantra and the grim-warrior Phenox.

Gator-Tooth (as he met the hungry eyes of each of the rogues in turn as he stirred the steaming stew): “It. Ain’t. Ready. Yet!”

The gruff leatherback tossed in a handful of chopped roots probably fresh pulled from the muck of the marsh. The other new thing about camp that Nezor noticed as he tossed his burdens onto an open patch of earth was that there was now a second raft on the shore, the wood white and newly chopped.

Zevor (he patted the giant as passed by): “For the chests my friend!”

The sneering giant turned around and eyeballed the gleaming mithral chest. He roughly approached one of the thieves and appropriated one of their short-swords. The mercenary mage noticed what he was up to and said, “um, I wouldn’t do that if I were you!” The mage finally introduced himself to Nezor as Ebaknor. Nezor duly ignored him and went to pry open the chest. The sword blade splintered and a bolt of lightning immediately exploded on the giant’s breast.

Zevor quickly intervened and had one of the more experienced rogues pick the lock of the other large chest and had the mage work on the mithral chest to try to pacify the giant. It took about an hour, the plain wood chest was opened and Zevor was taking inventory. Nezor looked on like a marsh-owl as he gulped down some of Gator-Tooth’s stew. Ebaknor the hireling mage finally conceded that he could not defeat the wizard’s lock spell or the lightning bolt ward on the mithral chest.

Nezor’s cut from the opened wood chest was 25 star metal pieces, 75 platinum pieces, 100 gold pieces, 625 silver pieces, 10 diamonds, 10 pieces of quartz, and 3 instead of 2 black pearls. The hill giant had insisted that he deserved the odd pearl as “hazard pay”. No one argued with him. Zevor then told everyone to relax and they would be leaving come early dawn and he would watch the remaining chests. Nezor refused to leave guard duty solely to the stumpy Westlander thief-captain and insisted that the chest would not leave his side until its lock was broke and he got his fair share of the loot.

It was when the conversation between the giant and the stump-of-a-rogue was about to get heated when a 9-and-a-half-foot-tall warrior wearing a leathern black hood with red-trim wielding a bearded axe crashed through the bushes charging straight at Nezor.

A rush of several more hoods followed the giant axe-man doubtless there were even more skulking where Nezor couldn’t see them. Phenox pulled his paired scimitars and dashed out of sight into the bushes. Nezor parried a blow from the other giant’s axe with his club. An arrow flew at Zevor and he dodged out of sight. Cantra knocked and drew but her bowstring snapped. That was when Ebaknor made a dash for the rafts.

A shout from Zevor signaled he was hit by a poisoned bolt but still on his feet. Nezor battled the other giant both too evenly matched for one to easily overcome the other. Nezor while caught in a clinch between his carven great club and the hooded giant’s bearded axe looked over to see Cantra pegged with a crossbow bolt drop unconscious to the ground. The hoods had already made onto the rafts with the smaller oak chest, Zevor was nowhere in sight and Gator-tooth was fighting with his falchion and being steadily backed towards Nezor.

Finally, Nezor landed a crushing blow into the ribs of the giant hood and was able to deflect a reciprocal power-attack from the bearded axe. Crossbow bolts and arrows continued to fly and bristled in the bodies that littered the beach. Gator-tooth hacked down a ratling and Phenox tumbled out from behind the bushes engaged in furious combat with what appeared to be the hoods leader. The big axe-man chopped deep into Nezor whom was only spared from a quick and savage death by his new and by now very ragged hide-armor. He replied in kind with a power-attack putting all he had behind the single blow, an all-or-nothing gambit for survival.

The giant axe-man gasped as he dropped heavily onto the black earth, the hood that he was wearing emitted a bright sudden flash of magic light and he was gone, teleported away. Gator-tooth dropped another ratling and backed up to the hill-giant’s side. Phenox dropped to the ground felled by a paralyzing spell from the traitorous mage Ebaknor. Nezor growled. Another rogue with a hand crossbow slid out from the overgrowth and shot an envenomed quarrel at Nezor fortunately the tiny barb couldn’t penetrate his armor.

Gator-tooth charged the crossbowman and the leader who had been dueling Phenox dropped his paired swords and pulled a fighting spear from his back all the while keeping his eyes locked on the raging hill giant. The hood-leader thrust his spear at the giant who barely parried but leaving himself wide open and as a result was skewered by the second. The blow very nearly proved fatal. Nezor rendered temporarily helpless as he recovered from the blow.

The hoods were on both of the rafts and on one of them was the mage along with the oak chest. Their plan had obviously been to snag all of the chests and abscond with them and the rafts, unfortunately the giant had thrown a wrench into those plans. Gator-tooth continued to fight valiantly and Nezor took another nasty jab from the hood-leader’s fighting spear.

Gator-tooth chopped another hood down and just as before the leathern hood flashed with light and the thug’s corpse was magicked away. Cantra began to move and crawled painfully over to Phenox pouring a potion of Neutralize Poison down his gullet but to no effect. Nezor broke away from the hood-leader and charged the nearest raft getting stabbed in the process again onn an attack-of-opportunity by the leader’s spear but he successfully smashed the first raft to pieces along with some of its occupants using his club. Cantra began to giggle, the hideous sound of her insane laughter crawled up the spine of all who could hear it. She had made it to her equipment and snatching up a long spear tossed it at the spear-bearing hood-leader wounding him.

The hooded spearman charged after the giant and Nezor after parrying another dangerous spear thrust responded with a massively powerful attack. The hooded leader taken by surprise leaned into the attack and was thus launched in a spray of blood and innards into the air splashing down somewhere in the unseen distance. Gator-tooth moved to back up Cantra as it appeared the hoods were in retreat. The second raft was too far away from the shore for Nezor’s club. He snarled as he could see the traitor Ebaknor astride unsteadily upon it.

Without a word, Nezor walked over to the mithral chest, picked it up as if it weighed nothing and after shouting, “YOU fergot sumptin’”, tossed the chest at the raft. The weight of the treasure within the metal chest completely shattered the lashed raft dumping the remaining hoods and the unfortunate mage into the slimy drink. Apparently Ebaknor couldn’t swim and sank along with the chest into the slime and muck of the swamp. Gator-tooth began to rant and rave about his “boats” and stormed off.

Among the corpses scattered along the shore was the arrow-feathered body of Zevor. Gator-tooth and the “goodfellows” were the only survivors. Cantra tossed the giant a potion of healing and it took quite a while before the spell over Phenox wore off. They hadn’t a clue where in the swamp they actually were or in which direction Xuun lay.