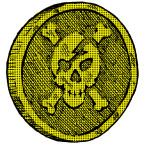 man raising the gold demon-shield just in time to ward off the first blow from the golden broadsword of the paladin. Phenox leapt onto a table while roaring something incomprehensible in a clear effort to intimidate the enemy. He failed miserably and the crowd of on-looking bar-patrons burst into riotous jeering. The grim-warrior barely dodged the arrow that thudded into the table shot by the ranger that accompanied the witch-hunters.

The Brighthouse cleric in lead of the witch-hunters said a prayer over his mace which began to glow ominously. Jokingly, Nezor shouted out, “So which o’ya would pay me to NOT hurt ya! Haw! Haw!” That’s when the golden helmed paladin that had already swung his golden sword at Corvo-Doom shouted out an insult, that which compared the size of a giant’s genitals with that of his brain. Nezor snatched up his weapon in ill-temper and launched himself at the witch-hunting paladin with a clumsy one-handed stroke of his club.

Phenox flew from his tabletop perch at the cleric landing a flying slash with one of his blades. The ranger turned and shot Nezor in the back. Cantra back-stabbed one of the 3 fighters that had surrounded Corvo-Doom and then the Hyvalian slaver did a sweep with his golden axe cleaving through all three of them in a single blow. The paladin leveled a blow at Nezor whom barely parried the glittering golden blade.

Three witch-hunters bearing bearded axes attacked the hill-giant, one of their number fumbled badly; the giant parried the other two easily. Nezor retorted with a wide, powerful sweep of his club fumbling the strike badly, losing his grip on the weapon tossing it into the entranceway of the tavern some distance away from the action. Nezor jaunted after his weapon with the three axe-men on his tail.

Corvo-Doom engaged the golden-helmed paladin in one-on-one combat. The three axe-men in pursuit of Nezor were able to put themselves in between the giant and his weapon attacking him in unison. The giant simply trampled them to death. The ranger worked himself between the Brighthouse cleric and Phenox. Phenox responded with savage blows from both of his weapons to the ranger’s throat. The ranger expertly parried one of the paired scimitars but the witch-hunter’s second short-sword failed to block the second incoming blade and as a result exposed his jugular. Blood spurt and he fell limp to the besotted tavern floor, dead.

The cleric tried but failed to complete a prayer his features overcome with shock that his defender, the ranger, had fallen so quickly. One of Cantra’s arrows shot from somewhere in the shadows nailing the cleric in his right hip. One of the other witch-hunters, what appeared to be the squire of the golden helmed paladin, threw himself at Phenox getting in a lucky blow wounding the grim-warrior somewhat. Corvo-Doom and the paladin were fighting furiously their golden weapons glittering and flashing brilliantly in the candlelight turning the sea of smoke into a swirling maelstrom as they exchanged blows.

Suddenly, from the rear of the place a gaggle of near a dozen drunken pirates with tattoos of a black skull on their bared chests threw their pipes down and rushed into the chaos adding to the uproar. The paladin side-stepped and made a restorative touch to the cleric healing his wounds somewhat. The squire continued to furiously swing his longsword at Phenox whom parried with one of his blades hacking a wound into the boy’s belly with the other. A black lacquered bolt shot suddenly from the shadows narrowly missing Corvo-Doom. The quarrel appeared besmeared with venom.

A pair of the pirates jumped Phenox with an amazing flying tackle and Phenox was able, by some miracle, to move gracefully out of the way. Seven buccaneers surged over the paladin and the slaver blocking them from sight with their stinking bulk. Another pair of the drunken seamen attacked Nezor, one of them landing a nasty blow on the giant, Nezor responded with a powerful buffet knocking the sea-dog to the ground. The cleric uttered a prayer and in a shower of heavenly sparks all witch-hunters still standing were healed almost completely.

Nezor turned as he picked up his club and saw a well-armed Naga tumble out of the shadows apparently wounded by one of Cantra’s arrows whom in turn shot into the shadows on the other side of the bar, Cantra then leapt from the dark remaining in sight for only a quick second as she dodged the bolt. The giant then stomped on the prone pirate squashing him.

Suddenly a blue lightning bolt exploded from the center of the pirates that had overwhelmed Corvo-Doom sending them all retreating, smoking, and obviously horribly wounded. The slaver himself was visible for only a second after before he disappeared in a flash of pale blue light. The paladin shouting in rage as his desired quarry was now gone hacked down a retreating pirate.

Phenox attacked the squire whom was ready for the attack and put all his strength behind his weapon in an effort to pre-empt the grim-warrior’s overwhelming offense. Unfortunately the more seasoned fighter leapt out of the way of the clever strike and countered with both of his scimitars cutting the boy down. The pirates’ captain blew an earsplitting whistle calling his men, the ones still able to walk anyway, back and stopping another group from joining the fight.

The cleric made some motions with his hands and weapon and a ray of light sprung from his freehand at Phenox whom dodged the beam easily. Meanwhile the giant could hear the scuffle where Cantra played her deadly rogue-games in the dark with an unknown number of Naga assassins. The paladin charged Phenox but the grim-warrior was again able to dodge the righteous blow. The grim-warrior flung the golden sword from the paladin’s grip with one his scimitars in a successful disarmament and hacked into the church-knight with the other. The paladin answered with a stunning shield bash.

Of the foes left standing only the Paladin and the Cleric remained of the witch-hunters and an unknown number of the mysterious Nagas were skulking about the perimeter. Nezor moved forward and power-attacked the paladin with a two-handed blow launching the broken corpse into the far wall on the opposite end of the tavern where it stuck for as few seconds before falling messily to the flagstones. Cantra was visible now at the far end of the bar where a black crossbow bolt stuck into the board right by her head shot by an unseen crossbowman.

Phenox moved on the cleric and struck him once and as the priest was backing away to the door, hit him again with a pair of vicious sword-strokes. Cantra moved towards the giant as another black bolt chased after her narrowly missing her back. Yet another black dart oozing black poison thudded into Nezor’s armor fortunately it didn’t penetrate his thick armor. The Brighthouse cleric broke from Phenox and ran out into the streets. Another black quarrel flew from the shadows and nailed Cantra the toxin paralyzing her. She fell to the floor as stiff as a board.

Nezor turned towards the direction from which the bolt had come and roared at the top of his lungs flexing his awesome muscles making him seem to swell to double his already immense size. Every single bar-patron still in the place began to rush towards the exit. From the corner of one his eyes the giant spotted the same Naga that he had seen stumble from the shadows just a minute or so earlier creeping towards the door trying to use the crowd as cover.

Phenox apparently spotting the creature as well rushed in and hacked a gash into its neck then barely dodged a naginata blow from another formerly unseen Naga assassin. Nezor took the head off the one with the neck gash using his club. Phenox battled the one bearing the pole-arm and another slithered from the shadows. Both were wearing scale-mail vests. Another envenomed bolt struck the giant this time penetrating his armor poisoning him. Fortunately its effect was not quite so severe due to his supernatural constitution. He was slower and his joints had stiffened painfully but he could still move and best of all, still swing his club with full force.

It wasn’t long before both Nagas were dead and a quick cursory check of the near empty taproom revealed that the other had fled. Phenox picked up the 3 gold talons that were sitting atop the table Corvo-Doom had been sitting at and brought his “last” potion of Neutralize Poison to Cantra. The hill giant looted the corpses of the assassins. The other bodies had already been stripped by the bar-wenches.

The giant went back to his table and plopped onto the floor. A barmaid brought a cask of whiskey to him and said it was sent with complements from the pirate captain whom she pointed out. He was the only other patron left in the place. Nezor assumed that it was a “no hard feelings” offering.

Sometime later as once again the cream of the poor quarter of Xuun had re-coagulated in the Whiskey Troll’s taproom, a plainly dressed Ivoran approached Nezor through the clamor and introduced himself as the owner of the Troll. He was interested in buying the midnight steel box. Once shown the item the man offered 30,000 gold pieces, a cask of superior quality whiskey, and 1 month’s credit. Nezor ecstatically agreed as did his two companions.