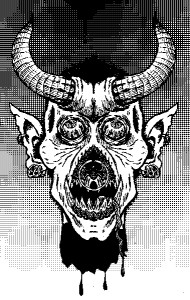 four way bar-battle between Brighthouse witch-hunters, Corvo-Doom and his lackeys with whom the trio were now lumped in with, the black-skull pirates, and a gang of Naga assassins which rumors assert had been targeting the Hyvalian slaver. Some of the slithering killers had born a tattoo of a serpent coiled around the blade of a dagger. Cantra had already bragged to her companions that she and she alone had stopped one of the Nagas from getting a sneak-attack with an envenomed dagger on the slaver unseen by all including her semi-doubting companions single-handedly saving Corvo-Doom’s life. They were debating the merits of her story when a tall, skinny Ivoran with a shaved head approached them whom they recognized as Corvo-Doom’s interpreter/shield-man.

He introduced himself as Ilhand, the hill-giant simply didn’t pay attention he let the others listen for him while he drank his breakfast, and invited the trio to meet with his lord Corvo-Doom in the Slaver Quarter. So after the giant finished his breakfast all three of the ‘goodfellows’ followed Corvo-Doom’s shieldman letting him lead the way. Eventually he guided them to a large opposing building seemingly grown from a combination of stone, reclaimed ruins, and adobe brick, the slave-pits of Corvo-Doom.

The slave-pits consisted of a circular three story edifice of stone with a large adobe gatehouse enclosing a wide stone-flagged courtyard at the center of which were a few wide stone-lined pits lidded with rusted bars. Iron-barred cells of varying sizes faced inward to the courtyard built into the circular building and along the ground floor of the inner side was a covered adobe walkway along which Cantra and Phenox followed Ilhand, Nezor had to walk along side that uncomfortably close the goings on in the wider courtyard.

As they sauntered they could see that the pits and countless iron-barred cells were mostly vacant. They also spotted a hairy fanged humanoid of indeterminate race whipping a group of slaves herding them into one of the many empty slave-tanks. Two of the trio entered a fair-sized meeting chamber where Nezor could sit just outside and be able to see and listen through the gaping oak double-door.

Corvo-Doom joined them not long after they sat around the long plain wood meeting table atop which sat a decanter of fine wine and a bowl of various regional fruits. The meeting was short and terse with the trio accepting a 10 gold talon apiece pay rate in exchange for a raid on a slaver stronghold hidden in the marshes. Nezor saw and heard the proceedings as an assignment to liberate the helpless and immediately imagined himself as the shinning hero amongst a crowd of cheering newly freed slaves. Ilhand passed Phenox a blood-stained map.

After another 10-day stretch which Nezor had spent in the Whiskey Troll tavern making quick friends with the city rat-trappers, the trio found themselves in familiar territory astride a log raft manned by their old acquaintance Gator-Tooth. The swamp was even more stifling and stench ridden than they had remembered and the boredom and intermittent attacks by monstrous swamp vermin over the several hours that it took to reach their destination served to remind them why they preferred the city. Gator-tooth brought the raft to a small makeshift dock and form there the trio took off on an overgrown path.

Nearly invisible in places, the very narrow path twisted through the thick pungent bush with Phenox leading the ‘goodfellows’, Gator-tooth did the “sensible thing” and was waiting with the raft. The trio did run into a small group of tusked swamp apes and did away with them after some difficulty; Cantra was badly wounded in the fight but was able to restore herself to full health by downing a potion of Heal. It was not long after that they approached the slaver fort.

It appeared a ruin covered in over-growth save for the brand new iron-bar portcullis at the rounded mouth of the front gate. Nezor just strode right in as the portcullis had been carelessly left wide open. Cantra and Phenox were exasperated, they had a plan that they had neglected to clue the giant in on.

Nezor saw that the design of the place was much the same as Corvo’s slave-pits but all the befouled cells here were crowded with human slaves filthy hands feathering the caged pits as they reached up through the bars. It seemed most of the slavers themselves were away currently but the human staff were still there and 10 Naga guards 2 of which were in full plate armor and heavily armed, undoubtedly captains of the guard. Suddenly a noblewoman in a crushed velvet dress and jewels around her neck jaunted in through the front gate after the giant. He at least had sense enough to recognize Cantra in disguise. Needless to say, the charade didn’t last long and in a lightning quick turn of events the trio was engaged in savage combat with the Naga guards.

A naginata bearing Scael-Naga immediately charged and attacked the giant and took a powerful retort from Nezor shattering some of the Scael’s ribs and the backswing of the gigantic great-club finished him. The body flew clanging as it hit the rusted lid of a nearby slave-pit. Two more Naga guards went at Nezor both nailing him with their polearms as the killing stroke dealt their compadre had left the giant wide open. Nezor fell to the ground bleeding, dying.

The next thing the hill giant remembered was Cantra forcing a Heal potion down his throat. He noticed his armor was irreparably damaged being reduced to a tattered half-suit. He stood up anger smeared across his broad dirty face.

Nezor (pointing to his armor): “Ya RUINED it! Ya lousy snakey RUNTS!”

Nezor raised both his arms into the air and shouted to the slaves in the cells and pits, “I am the HERO Freeman Nezor of the Hill-lands! I am prepared to DIE for your freedom! Rise up and turn on yer masters and be FREE!” His words actually inspired the slaves, as probably did his sheer size. They began to try to pry their cages open and tried to fight the other more inconsequential slaver-staff with their rusted chains as improvised weaponry.

The 2 naga guards that had initially dropped the giant turned their attentions back to him and attacked. Nezor held his ground against them as they leveled attack after attack letting fly a virtual storm of flashing blades. Cantra tried to shift the odds in the giant’s favor using her bow against his foes but was too close and took a blow from a naginata blade that nearly killed her.

Phenox shouted his battle-cry as he leapt from the auction block at a Naga-guard. The armored captains made their moves and charged Nezor dramatically shifting the odds of victory in their favor. Nezor barely held out by parrying blow after potentially lethal blow and with a roar of desperation swept his club in a wide and deadly arc killing all 4 of his enemies in a single powerful sweep of his great club.

Phenox was working his way to the cells where he found a single chain securing the cell-doors of a considerably long row. He shouted to the giant as his strength was needed to snap the chain. The grim-warrior then easily dropped a human slaver that charged him then took the keys from the corpse and tossed them to a nearby slave. Two Scael-guards converged on him. Nezor rushed through the chaos and grabbed the chain with one arm and yanked, the rusted chain snapped and all of the doors along that row clanged open immediately.

Phenox continued to battle the two guards on him and the giant spotted 3 more Scaels coming at him. Nezor charged them with a roar killing them all in another great single sweep of his massive weapon. Phenox finally chopped down one of his two foes and Nezor squashed the second with his club. The freed slaves surged over the courtyard overwhelming the rest of the guards and slavers, many were chanting Nezor’s name. Even though he was bloodied and his fine armor was destroyed a very wide and toothy smile broke across his sweat slicked face.

Meanwhile Cantra found the fort lockbox and goaded the giant into snatching it up as they fled from the now burning stronghold as it seemed the liberated slaves had begun to set it aflame. Phenox and Cantra began to lament that they were missing out on the 10 silver piece bounties on each of the slaves’ heads that Corvo-Doom had offered for their return. Nezor wasn’t paying attention.

Later, the trio of “goodfellows” turned off of the trail into an old long-neglected campsite to divvy up the booty from the strongbox. Nezor’s cut was 124 gold pieces, 217 silver pieces, 58 platinum pieces, and 789 copper pieces. From there they discarded the small iron chest and moved quickly back to the raft. It was well past dawn when they finally arrived back in the city, a few minor incidents including an attack by a pair of giant constrictors had occurred on the return trip.

Cantra and Phenox split off from Nezor at the old gristmill intent on collecting the payroll, Nezor made sure to remind Cantra that if they didn’t pay him his fair share he would “squash” her with his boot. He had caught her trying to cheat him on the split back in the marsh. The pair was quickly out of sight on their way to see the master-slaver of Xuun. Nezor was heading back to the Whiskey Troll dragging the carcasses of a pair of butchered giant swamp constrictors behind him.