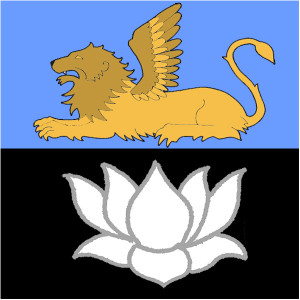 3 days had passed since the trio of “goodfellows” had traversed Xuun’s bazaar and outfitted with their new gear the trio finds themselves in the swamp astride a crude log raft piloted by one Gator-Tooth a swamper leatherback with tattoos over his bald sun-baked pate in a crocodile skin vest and canvas pantaloons. At its head serving his role as fearless leader, Zevor the Westlander rogue, and filling out the rest of the motley crew3 more rogues dressed similarly in studded black leathers and a Westlander mage dressed in a brown robe with gold trim serving as mercenary.

The small party of desperados had sat sweating on the wet logs of the raft in a reeking swamp located somewhere in Gorloc hidden in steaming shadow as the wilting dripping canopy of the marsh was thick enough to completely blot out even the noonday sun. The party was currently on edge as they had already braved giant constrictors that prowled the green waters and giant spiders the size of large dogs which dropped from the black sagging canopy.

The raft ran into a shallow and skidded roughly onto a sand-bar quite a distance from the barely visible shore. Nezor and Gator-Tooth hopped into the waist-high (for Gator-Tooth anyway) opaque waters, a thick film of bright green slime clung to their clothes as they dragged the raft onto the shore to allow the others a dry disembarkation.

As soon as the old leatherback hit the sand-clay shore he immediately began to search himself and scrape several fairly large black leeches from his belly and arms with his broad-bladed bowie-knife. Nezor just shrugged, his hide was too thick for the tiny black specks to even try to bite him. He hefted the few water-tight barrels the crew had brought with them onto the shore and into their newfound campsite.

It was up to Gator-Tooth to set up a hasty camp while the rest of the party, the rogues and the “goodfellows” huddled around Zevor to hear his plans. The ambush spot would be scouted tonight by himself and two of his three rogues, the ambush would be tomorrow at first light, he tried to smooth the “goodfellows’” dander with a typically greasy smile and an open-palmed gesture then when that didn’t do it he pulled a rare and expensive timepiece from his studded leathers. He went back over everyone’s role and discussed positioning.

Come morning the rogues and Zevor took up their positions with crossbows ready as did Cantra with her bow, all out of sight in a large clump of broad-leafed bushes. Phenox was just off the narrow black road in a grass-choked ditch with weapons ready. Nezor was leaning against a thick warty tree waiting for Zevor’s signal to step out onto the road blocking the caravan-wagons. They were waiting for a caravan of 3 wagons bearing arms that consisted of a field split per fess with a winged lion against a blue field atop a white lotus against black. Nezor spotted a mossy sand-stone boulder in a mass of wet reeds and murky green water in a pit-pond to the side of the road. He had a plan.

It was a few hours later when the sounds of steel clad wagon wheels sloughing through sticky black mud and the huffing of horses could finally be heard coming up the road. It wasn’t long after that the beleaguered and mud-laden wagons came into the thieves’ hungry view. Zevor had yet to give the signal but eager to put his plan into motion Nezor leapt out from behind his tree chuckling stupidly as he chucked a boulder at the lead wagon.

The boulder crashed into wagon’s side pushing it into a water-filled ditch hopelessly stranding it. It was only then that the impatient giant could see that it was in fact, a gypsy caravan. The southern-nomads scattered and fled like cockroaches before him disappearing into the overgrowth. The other wagons immediately began reeling and took off down an invisible side-path and the boulder-crippled wagon slowly sank. It was another hour or so before their actual target rumbled into view. Zevor gave the signal, the sly hoot of a swamp owl. So with a disappointed sigh, the hill-giant did his part and stepped out onto the road.

That was when Nezor saw that an Ivoran Knight in full chainmail and a ranger with full kit were leading the wagons, both mounted. With utter calm they signaled the wagons to stop. The knight clacked shut his great helm’s visor.

The Knight (lowering his lance): “Prepare yourself filthy giant!”

The shady mage that Zevor had brought along fumbled his spell and Phenox moved from his position trying to sneak around and flank the knight. The teamsters on the wagons became the first victims of Zevor’s and his rogue’s bolts. With a ringing shing the ranger drew his paired short-swords leapt from the back of his horse and charged grim-warrior Phenox. Nezor immediately charged the knight and dismounted him with a single mighty metal-crunching swing of his club. The knight immediately leapt up and in a single movement drew his long-sword.

A fighter from the rear of the wagon-train began to charge at the giant. Crossbow bolts and arrows flew in a brief but harrowing exchange. The mercenary mage cast a spell at the Ivoran knight but he was able to apparently shake off the malignant sorcery. A teamster shrieked and fell dead from the lead wagon. The knight struck with a savage swing against Nezor scoring his new suit of hide armor badly and barely touching the giant’s flesh beneath. The charging fighter hit the giant with a blow from his battle-axe but only managed to hack into the crocodile’s hide. The knight followed up with another armor chopping blow from his broad-bladed long-sword.

Phenox was engaged in his desperate duel with the ranger and another fighter, Cantra was somewhere unseen, while crossbow bolts continued to fly and occasionally when a fighter or teamster wandered too near the bushes, one of Zevor’s rogues would shoot out of nowhere and stab them in the back or slit their throats. The fighter wielding his axe against the Hill-giant fell with a bolt in his back. The merc-mage finally dropped a fighter with an acid type spell. The knight renewed his attacks against Nezor and the giant replied with a smashing two-handed club swing flinging his broken corpse off into the dark of the swamp.

Phenox dropped the ranger; the fighters were picked off as they began to flee. The battle was over. In the end the rogues and the goodfellows made away with 1 large mithral chest covered in runes and locked with a large iron lock and another very large and heavy chest, unlocked, and 10 superior quality spears found in one of the wagons. Nezor was a bit put off as his new armor was pretty badly, at least in his estimation, damaged though it had performed admirably especially against the knight’s weapon.

The armor was that he had made from the hide of a giant crocodile. It was gleaming brown spotted with black scales in places and covered the giant almost completely from his knees to his shoulders. The helm expertly crafted from the beast’s skull and head had come complete with polished black-wood carven eyes. The giant was proud of his new outfit and very pleased with its performance in battle he just hadn’t thought that it would take such punishment.

He refused to move any of the chests as the entire party of thieves struggled even with crudely fashioned bar-hoist which had snapped at first lift. Zevor had to pay the stubborn giant up front, 100 gold pieces to get him to pick them both up and take them to the camp, which he did with ease almost as soon as the coin dropped into his massive palm.