The Whiskey Troll Tavern was a-buzz with the noise of conversation, sinister and riotous laughter, and the loutish shrieks and yells of its loyal but filthy patrons. Floating just above the clamor barely able to take wing in the thick sea of lamp-yellowed pipe-smoke were the sweet banjo notes of a doshpuluur (a 3-string long-necked lute) and its turtle-shell sound-box as a bard plied his trade. The young bard was dressed in the half-brown, half-green colors of the Bardic College at Ezmer bearing also the school’s mark, a golden acorn with a ram’s horn curling about it, on his breast. He was singing a traditional song which involved something about a maiden and a dragon somewhere in the Marshes of Gorloc. Nezor threw with some force a handful of gold coins at the musician leaving a few marks on the young man’s forehead. The bard was happy for the coin however and pausing, stooped to collect them from the damp, filth be-speckled flagstones. 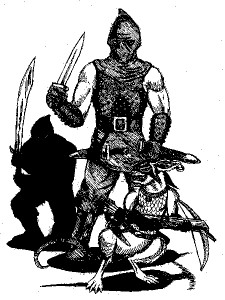 Phenox worked the raw skull of the half-giant, the blue-boar, fashioning it into a helmet for himself. He was quietly chatting with Cantra, dressed in parti-color, about a group of Scaels that had just slithered in; one was lurking in the shadows. Corvo-Doom burst into the place making his way to a table by way of a wide angry stride his minions and shield-man in tow. His Ivoran shield-man bore a heavy spiked gold longshield bearing the image of a severed demonic head with a crown atop it and rimmed with demonic-script.

The night shapes up to be another in a long string of loud, vacuous, and uninteresting nights tinged with a strange and looming paranoia. Cantra eventually decided to retire to her apartment. Not soon after she had retired than Zevor the swamper pulled up a stool to table where Nezor continued to drink and eat and the Grim Warrior Phenox continued to carve. The Ivoran swamper set down a bucket of whiskey then sat after scooping some up in his jack.

Zevor: “They treatin’ ya right here?”

The swamper goes on to talk about some “highwayman work” somewhere in the swamp north of town. Nezor seemed a little interested but his ears perked up when Zevor, as if sensing what would properly motivate the giant, mentioned that the caravan was hauling a stash of “unearned” cash and certain “stolen” items. It was “vital to certain concerned citizens of Xuun” that they, meaning the tinder and gear, be “liberated”. Nezor mulled it over for about an hour while Zevor covered the tab. In the end the giant agreed and volunteered his companions whom he referred to as the “goodfellows”.

By about midnight Nezor had passed out drunk. It seemed that as soon as his eyes slid closed the screams of the “goodfellows” yanked him into the full blinding gold-light of morning out from his peaceful stupor. He was awoken to three human black-hoods armed with short-swords raised stood around his table and his prostrate figure. The dark shape of Phenox flew into the fray leaping on a tabletop and slashing away with his paired scimitars separating a hooded head from black draped shoulders.

Another slashed at Phenox’s legs but missed and the other stabbed Nezor in the side renting a hole in his cowhide jerkin. A ratling streaked from the shadows and slashed at Cantra with its dagger but she evaded the oiled blade easily. Yet another ratling made an appearance and this one buried its dagger to the hilt in Phenox’s side.

The Hill-Giant snatched up his club ‘dog-smasher’ and with a mighty sweep forced one of the human thugs to dodge out of the way clobbering the other and launching his corpse through the air into the dark inner reaches of the tavern.

The ratling on Cantra nicked her with its blade. The other on Phenox lashed out missing then quickly backed away. Phenox slashed at the creature in response but it dodged away disappearing into shadow. Cantra whipped out her bowie-knife and stabbed her tiny chittering foe wounding it badly.

The remaining human hood nailed Phenox with his weapon and Nezor immediately took him out with a sudden sickly wooden thud followed by an explosion of blood and gore. Cantra’s little foe struck at her but she avoided the blade and as it turned to flee she stuck it in the back killing it. The trio noticed that these thugs’ hoods were of fine black leather this time.

After looting the corpses of coin the trio makes their way to Xuun’s bazaar. The wide avenue was noisy with the clatter of people and wagons as the traffic jammed up under the continuous cloth awnings on both sides and the masses of vendor-carts and produce laden carpets dividing the cobbled street into two chaotic lanes. The sheer diversity of the people was still humbling to Nezor. There were civilized Ivorans, dirty Westlanders, Nagas (most being of the Scael persuasion, a few may have been of Southern Barbarian stock), dark-skinned Creschans, and even a few Hill-Landers though all had appeared to be pirates in need of a ship. The air was rich with scents of fresh spices, the delicious oily smells of cooking food, and the exotic bursts of scented oils and incents. However, the stench of unwashed bodies and the general filth and sewage which ran in the gutters was only just detectable underneath the exotic pall of the marketplace.

Phenox located an alchemist and Cantra purchased some items to fill out her disguise repertoire and a make-up kit. Nezor split off from his companions when an armorer called him over to his stand which was covered in crocodile and alligator leather and skins. The shopkeep directed the hill-giant’s attention to the massive skin with its head still attached hung on the wall behind. The crocodile had been massive and was perfect as a suit of hide armor for Nezor, so naturally he paid half up front and spent awhile he was measured for his new suit. It would be ready for pick up in about 3 days.

As the “goodfellows” found each other as they were heading back to the Whiskey Troll they caught eye of a large group of about 12 fighters all wearing white armbands. One of their number armed with a golden sword was killing a tentacle creature at one of the booths. Another wearing chainmail and wearing a white Acton with a gold solar-disc over a blue wavy line on its front turned and raising his straight bladed broadsword into the air shouted, “We seek the enemies of life; we are looking for witches to BURN!” By the looks of him he was either a Cleric or Paladin of the Brighthouse (the Creschan Church). Nezor wasn’t quite sure nor di he care much. The ‘witch hunters’ then proceed to savagely beat the gypsy purveyors of said shop-stand.

The “goodfellows” turned and head back to the tavern, there the roguish Zevor later met with them letting them know that there “has been a delay” and it would be about 3 and half more days until the liberation of the goods form the criminal caravan in the swamps. Phenox tossed 3 leather hoods onto the ale-soaked table and Zevor without missing a beat snatched them up and tossed out 30 gold pieces onto the damp board.

So, Nezor committed himself to drinking, eating, and waiting for his new suit of armor to be done.