The sweaty greasy crowd in the smoke-fogged taproom of the Whiskey Troll Tavern was in a cacophony as the clatter of coin changing hands began to wash over the former uproar generated by the evening’s entertainment. Among the grungy ragged crowd were a group of ethnic Scael Nagas with a dagger and coiled serpent design on their pectoral plates, and a lizard-man (probably a descendant of slaves escaped into the swamps centuries ago) and his human companions all dressed in coats made of a patchwork of rat-skins with an embroidered patch bearing a rat impaled on a dagger sown on the backs. 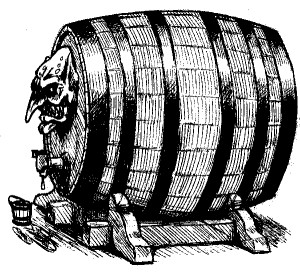 A stumpy Westlander with a studded black-leather cowl was the luckiest gambler in the crowd as he had apparently made a significant wager on the hill-giant and his two companions against the 7 black-hooded thieves’-guildsmen whose corpses now littered the place. The leader of the rogues lay splattered all over a far wall opposite the scene.

A silk-robed Hyvalian, a gold signet ring on his hand and a great sword at his side, seated at a private table and surrounded by servants looked on as he sipped whiskey from his golden goblet studying the giant and his two companions. He had passionlessly observed the brawl but seemed to take a little more interest in the night’s victors, at least for the moment. In the course of the night Nezor would learn that this glittering and seemingly out-of-place character was Corvo-Doom, a powerful slaver.

Nezor the giant flopped down near his table, back against the wall nursing two nasty spear wounds in his side made by the short-spear wielding thief-leader. Phenox, a dusky southlander in alligator-hide armor his face hidden behind a mask fashioned from a human skull, after tossing a healing potion to Nezor, went to lopping off the heads of the corpses that were still mostly intact with one of his paired scimitars. The giant poured the potion on his tongue like an eye-dropper and began beating his club on the stone floor.

Nezor (played by me): “Gimme some whiskey! A hero thirsts!”

Meanwhile Cantra, the other of Nezor’s two companions, had already buzzed away and disappeared somewhere behind the bar. She had been sporting a single but deep quarrel wound.

To the giant’s surprise the stumpy Westlander in the black cowl jogged up with a full cask of whiskey and eagerly filled his copper drinking horn to the brim instead of Ebuyah, one of the troll-mutilated maidens which worked the fetid place and one of Nezor’s favorites.

Cowled Westlander: “Those whoresons deserved what they got. The Black Hoods have been interfering with my business for years. I’m Zevor by the way!”

It turned out that the stump of a Westlander was a “swamper” which meant little to Nezor. The giant continued to drink on the little man’s tab for the rest of the night while the ‘swamper’ tried to recruit him for some sort of a job that could “use some muscle”. He also offered a bounty of 10 gold pieces for each hood taken from a black hood member.

Come morning all three companions rejoined at their table in the Whiskey Troll Tavern, Nezor and Cantra having met at the House of Healing run by the ubiquitous White Star Guild in order to get ‘fixed-up’. Phenox was not-so-subtly de-fleshing a severed human head, one that he had taken during the battle the previous night. Nezor was ordering breakfast, a mass of steaming meats, a massive bowl of some sort of thin stew and a bucket of frothing ale. Cantra fluttered away to the barkeep in order to ‘ask him something’. It was a short while till she jaunted back and said that the group was heading to the city’s wood mill in the extreme east separated from the swamp only by a deep creek. The group waited until the hill-giant finished his meal of course.

It was close to noon when the trio neared the mill. As they continued to tread the yellow dirt road high piles of cut logs began to rise to either side. Suddenly the Cantra and then Phenox ducked out of sight leaving the clueless giant to stride right up to the yawning front gate through which lay the mill’s front yard. Nezor shrugged at the apparent absence of his companions and looked about. He could see a small caravan that had curled into the yard some hours ago flying a green flag on each wagon bearing the images of a black axe in a black oak. A small group of men, southlanders mostly, were talking.

One noticed the hill-giant and approached introducing himself as the yard foreman. Not knowing what to say Nezor simply said that he was looking for a job, the foreman seemed pleased and told the giant to wait a while as he had to ask the boss before hiring anybody. The boss was busy he said as he motioned to 3 men at the lead wagon of the caravan. Between that trio and the rest of the yard was a handful of human fighters.

The foreman: “He’s over there meeting with Zaraid, the merchant.” Nezor dumbly nodded in the affirmative.

There was a half-giant in boar-skins armed with a boar-spear wearing a bright blue enameled pectoral plate, an obvious human merchant, a Westlander, decked out with lots of gold jewelry and wearing a brown & crimson studded arming doublet, and a brawny sun-darkened man probably the mill-boss. The foreman jogged over across the dusty yard past the group of armed men, probably hire-ons for the caravan and a few guards from the mill, to the brawny older man. Just then, Nezor noticed a Southern Nomad girl stride right in through the front gate. She was bare-footed, wearing a clean but simple gown and was painted like a prostitute. The heavy make-up probably a ruse to hide a Naga heritage, he couldn’t see any goatish features in her countenance.

The gypsy strode with a rapid gate straight towards the merchant and the caravaners. She had a certain resemblance in build and attitude to Cantra. Nezor continued to wonder where the hell his companions went. The mill-boss had in the meantime approached Nezor who still stood just inside of the gate.

He waggled his club.

While the two men were parsing the giant’s heavy Hill-lander accent, a girl’s shriek echoed through the yard. The caravaner half-giant had thrown the nomad girl over his shoulder and was striding behind a high wall of piled logs. Nezor gazed after them with head cocked. Not soon after the boar-skinned mug was out of sight than his voice bellowed, “YOU gypsy WHORE!” All heads in the yard whipped towards the discreet pile.

The merchant Zaraid waddled quickly to where his man was. After quickly excusing himself with, “don’t worry boss I’ll check dis oot”, Nezor followed him behind the wood edifice. The giant was in time to see the gypsy girl hopping up the wood pile part of her dress ripped off and her make-up smeared off of half her face revealing her as Cantra to Nezor. The boar-skinned half-giant had a bleeding knife wound on his throat. The brute threw a punch at Cantra but she easily evaded and back-flipped to the top of the pile.

Zaraid unhooked his battle-axe from his belt then out from nowhere Phenox emerged slashing at the barrel-shaped merchant with each of his paired scimitars. The fat man dodged backward 10 ft. and the Blue Boar forgetting Cantra lunged at Phenox with his flanged-spear to defend his master. The blow was easily deflected. Nezor brought Dog-Smasher to bear and prepared for battle.

Zaraid the merchant caught both of Phenox’s swords in a clinch with his battle-axe. Taking advantage of the Grim Warrior’s vulnerability, the Blue-Boar stuck him in the guts with his spear. Nezor popped the fat merchant’s head with his club using a single-handed grip. Both Phenox and the Blue-Boar skipped backward away from each other, though the Grim Warrior did so in order to recover from the grievous spear-wound in his stomach. The Blue-Boar held up his spear and shouted, “Parlay! Parlay!”

Cantra immediately leapt down to the ground to fall upon and search the merchant’s corpse. Phenox surged forward and viciously attacked the Blue-Boar. The Blue-Boar struck back unsuccessfully with his boar-spear. Nezor crushed the half-giant with a two-handed club strike. Phenox immediately fell upon the half-giant’s corpse and commenced to looting it.

Nezor just turned around and strutted back around from behind the pile towards the Mill-Boss and the Foreman. He gave as quick an explanation as he could without missing a step in his stride on his way out the gate. He blamed the Blue-Boar for the whole debacle as the ‘villainous’ half-giant had turned on his master over ‘first-dibs’ on the gypsy whore.

Later, back at the Whiskey Troll the three companions reconvened at their table. Cantra had received a bounty for the merchant and his servant and had lifted a lock box from one of the wagons after the giant had fled. She wanted to split it up ‘behind closed doors’ back at her apartment. Nezor basically threatened her to get his share ‘now’. As they were leaving a small group of thugs entered the place wearing black hoods over their heads.

Nezor stood up and roared at them, “this tavern is for the justly goodfellows only! NO Black Hoods!” He gestured towards his two friends. The black hoods ran back out the door.