The bard, the group’s contact, had appeared as if from nowhere and sat conversing with 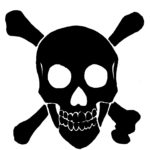 his other two companions (Dravor played by Gil and Trantox by Jenn) in their language, Poison-tongue. Jíen couldn’t understand as he only spoke, at the moment anyway, the Deadlands tongue an archaic Hyvalian dialect. He did however notice the bits of other numerous conversations, mostly in Ivoran (another dialect of Hyvalian) that floated upon the heady and noisome atmosphere like so much flotsam. He had pieced together something from the general murmur about a missing hill-giant captain of the guard. Nothing really interesting.

His shadow-drowned eyeballs rolled about the place. In the corner by the gaping doorway, an old portcullis no doubt, stood a perpetually empty table, its boards strangely dry and carved with a decorative image, which he could not presently make out but it looked like an expertly carved clown. Meanwhile a ruckus began near to their table as 2 groups of pirates began a drinking contest against each other. A few were speaking in the Deadlands tongue.

The necromancer’s patience was at an end as the bard and Trantox seemed to be gabbing. Jíen turned to the bard, Rantcor, and asked what they were talking about finishing with, “I’m here for a job not conversation!”

Rantcor briefly conversed with the necromancer in broken Hyvalian about his range of skills the bard ending the talk with mention of “possible extermination work”. The bard then turned to Trantox and gave him directions to someplace called “The Broken String” and to be there at midnight, from what the necromancer could make out anyway.

A group of rat-catchers tumbled in ready to pay for drinks in rat-tails loudly talking rumors and conjecturing on the fate of one Nezor. A short while after Rantcor departed Dravor got up from the table and began to preach to various bar patrons which attracted Jíen’s attention as it wasn’t about the Black Faith, the theosophy of the Deadlands.

So, the necromancer sauntered over to the pirates that he had heard chattering in his language and sat down. They had black-skulls tattooed on their chests and arms. He quickly got on their good sides after buying a round and then casually mentioned that the big ugly guy in black-painted bronze armor was a Blackguard who was bringing down bad luck and curses on the head of every sailor in the place. He went on to say what the guy was preaching was offensive to the goddess of the sea, Ranah the patroness of sailors and favorite deity of most sailors that port in Xuun.

It wasn’t long before the whole group, all 7 of them, stood up and surrounded Dravor who didn’t take them telling him to shut-up about his religion very well. Jíen just sat back and enjoyed the show.

The Black Skulls charged Dravor with their fists flying who then attempted to drive off his assailants by intimidating them which worked too well. All 7 of the pirates skidded to a halt on the ale-soaked floor and drew their cutlasses forcing Dravor to draw his massive zanbato. One hacked his mark into Dravor’s side with a cutlass, the Blackguard knocked aside another’s dagger blade, and then yet another’s cutlass clinched his zanbato when he responded.

Trantox seeing his companion in trouble prowled up behind one of the pirates and stuck him with his silver dagger badly wounding the Black Skull. Trantox barely dodged the reciprocal blow from the wounded pirate’s slat-scored dagger. Dravor easily broke the clinch on his weapon but then got nailed by the clinching pirate with a critical blow forcing him back and giving pause as he attempted to recover.

Dravor was able to shake off that savage blow completely. Observing that his companions weren’t as tough as they thought they were and realizing his little bit of fun may have gone a bit too far Jíen cast Animate Necrosis on the dagger-wounded pirate. His red dagger wound turned black and small tendrils tore out of his flesh and began strangling him. Trantox took the opportunity to stab the man again and again finally killing him.

Dravor parried more cutlass blows and Trantox took a lucky dagger jab to the ribs wounding him badly. Dravor then chopped into another Black Skull wounding him unto death. Seeing the fight was swinging to his companions’ favor Jíen grew bored and took his skeletal minion, still disguised in padded robes, out to look for The Broken String.

It wasn’t long before the Deadlands necromancer found the place which appeared only as placard swinging over an empty doorway between buildings that led to a spiral stone-step which wound down into a small dimly lit taproom with incense spiced air and an oddly and severely subdued atmosphere. “At least it doesn’t stink”, Jíen thought. There were curtained booths along the wall opposite the bar. At the bar there was an unconscious patron and tending a bored looking faun.

Jíen bought 3 glasses of “average” wine and waited at the bar for his companions. They arrived not long after looking worse for the wear. They slurped down their glasses in a single gulp and ordered more. Trantox after his second glass traded a Yellow Lotus blossom to the bartender for a full bottle of the stuff. Come midnight the dark trio’s contact showed up.

Rantcor passed a strangely struck coin to the faunic bartender whom nodded in the affirmative and gave him a bottle of dark wine. He then led the trio into one of the private booths. He had a job and as he told it to the other two he repeated every sentence again translating for Jíen.

The bard mentions during a period of translation to Jíen that he may have a special job coming up in a little while and to go to the charnel house on the north end of town and mention “ghoul-work”. After giving the trio the skinny the bard stays until his bottle is empty in the median trying to talk Poisonwood politics with the assassin and the blackguard. Before he left Rantcor mentioned that if the group needed a place to stay there was a squat in a two-story adobe apartment nearby which he was sure was fairly safe to sleep in.