The pair of guards walked in, one with a bottle of wine, the other placing the key in his satchel. He lit an oil 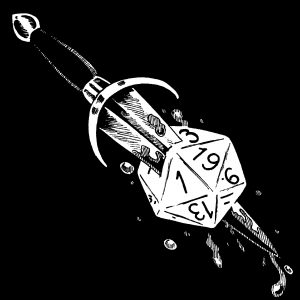 lamp and then set to lighting the fireplace. Afheesh (played by yours truly) from just up inside of the flue, could hear the second guard pop and pour the wine. He was shaking with anticipation. His vengeance was soon at hand. Two thuds on the floor indicated that their helmets were off.

The first grabbed some logs from the woodpile next to the fireplace. Just as the first guard knelt down to place the first log into the hearth, Afheesh picked a chunk of cinder from the inside of the chimney and flung it down. Of course, the first guard poked his head in to check it out.

Suddenly, Afheesh dropped down and stabbed him in the neck. Wufcor (played by Isis) leapt from his hiding place under a table stabbing the reeling guard in the back. Sikeek (played by Jenn) sprung from her dark corner and stabbed the wine guard who then snatched a fighting spear from the wall. Afheesh redoubled his efforts against the first guard nailing him again but the guard’s chainmail absorbed most of the damage. Sikeek moved in on the other guard and slashed him.

Wufcor struck at the first guard wounding him badly. He in turn pulled the spiked mace from his belt and desperately swung the weapon at Wufcor accidently smashing a small table. The second guard struck at Sikeek with his spear barely missing. Afheesh ran the first guard through with both of his weapons killing him instantly. He and Wufcor then turned their attentions towards the spear-bearer.

Sikeek struck out and got a good hit in on the spear-bearer. Wufcor ran in and jabbed him in the back causing the blood to run. He thrust at Sikeek catching her in the belly. The small ratling stumbled backward from the fight (requiring a recovery check to keep from dropping). Afheesh leapt in missing with one weapon and hitting with the other but again the guard’s armor lessened the blow significantly. Wufcor tried to get in the last stab but tripped over his own feet. The spear-bearer lunged at Sikeek once again but missed then swung the butt of his weapon around and smashed her in the skull. Sikeek stumbled back once again nearly passing out.

Afheesh lashed out with both of weapons but the haft of the guard’s spear easily parried both blows away. Wufcor moved in and stabbed him again. He thrust then swung with the butt of his spear but missed both times. Afheesh landed the killing blow through the guard’s clumsy defense (a Natural 1 parry).

The blood was still pooling as the trio of ratlings looted the place and cracked the lock off a chest. They absconded with 5 gold talons, 6,000 bronze thorns, a low-quality bullwhip with a butt-spike, a silver ear-cuff, and a high quality dirk.

Thinking that no one was looking, Sikeek found a secret compartment at the bottom of the chest discovering a gold and ruby ring, and a sack of 6,000 bronze thorns and 4 gold talons.

Sikeek: “But I found this…”

Afheesh: “And we both saw you. So now, it’s group shares. Besides you’re a hired dagger or would you rather be dead?”

Meanwhile, Wufcor tried to get away with the 900 bronze thorns he found on the corpses to Afheesh’s chagrin.

Wufcor: “Don’t kill me boss! See, I’m putting it in the group PILE!”

Afheesh gritted his teeth and the trio began to file out into the street after vacating the apartment building. However, just as they broke out onto the street they ducked swiftly back into the cover of a shadowed corner. A gang of roaches with a Mantck leader was out front obviously looking for trouble. There were too many to deal with at this point. The ratlings easily snuck past the gangsters and proceeded to travel to their other mark’s home in another apartment building to the south.

Soon enough, the trio clustered around a sturdy locked wooden door in a narrow plastered ill-lit hallway. There were only a couple of clay chamber pots set outside the doors aside for the sparse lamp lit niches in the walls. The smell was not pleasant.

Afheesh (to Sikeek): “Okay thief, get to crackin’ that lock.”

Afheesh: “No…hey weren’t you badly wounded a little while ago?”

Jenn: “Yeah, healing potions. That guy almost killed me in a single hit TWICE back there!”

Sikeek: “So, I really don’t wanna go in there guys. C’mon, we already got some cash…I need to roll some BONES!”

Wufcor (flashing a piece of quartz to Sikeek): “Betcha can’t open that lock.”

The Canny-Jack (Wufcor) put his ear to the door as Sikeek went to work on the lock.

Again, Wufcor (in a hushed tone): “Hmm…I think I can hear him. Sounds like he’s messing with …metal stuff?”

Sikeek kept trying the lock but its artisanship kept evading her skill. After three tries at it, finally the click of success tweaked their twitching ears.

Afheesh had his back against the wall opposite the door ready to pounce. He was huffing in the foul air of the hallway with every deep breath. His needed to quell his thirst for vengeance.

Afheesh (through clenched teeth, yeah he knew this was a bad idea): “Let’s do this.”

Sikeek slowly opened the door while trying to stay under cover. The door came to a creaking stop and revealed the guardsmen, their target, in full chainmail wielding a bronze shield and a great sword replete with bronze great helm.

Guardsman: “You Ratling thieves have come to die eh!?”

What ensued was a deadly dance of whirling weapons, lightning reflexes, and sheer luck. Eventually, Wufcor buried his blade in the guardsman’s kidney nearly killing him then Afheesh followed up with a paired weapon strike ultimately downing their prey. Their enemy had not landed a single blow in two full rounds of combat. Afheesh felt some satisfaction standing over the body of the last guard against whom he had pledged vengeance. Vengeance indeed tasted sweet. However, he was now also eager to hurt the Roaches in any way possible.

As before, the ratlings ransacked the place, again finding a chest, and again breaking the lock and absconding with a fat sack of coin. Inside they had found a bag of 4,000 bronze thorns, a bone pipe with a bowl carved into an eagle’s head, a pouch of high quality smoking herbs, and 5 gold talons. They also looted 400 bronze thorns from the corpse. The three eventually landed in a room, rented by Afheesh, at the Last Rest Inn where they split the take. Afheesh netted 4,566 bronze thorns, 4 gold talons, and took the silver ear cuff. “Not a bad start”, he thought.

After the dividing of the spoils, Afheesh and Wufcor decided to cut Sikeek in on a standard share instead of paying her thereby welcoming her into the crew. Shortly thereafter Wufcor and Sikeek left. The latter mentioning something about getting “one more game in” before dawn. Afheesh settled in for some well-deserved rest. Thoughts of making the Roaches suffer never far from his mind.