After a forced march around the parade ground and a breakfast of fruit, veggies, and bread in the mess, 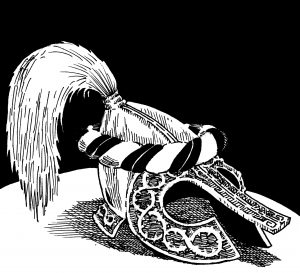 Afheesh (played by your dear narrator) went to the bursar. He collected the previous day’s pay, 95 bronze thorns (it would have been 100 but for the 5% Mezcor tithe). He spent the rest of the morning atop the thorns above the gates spotting for incoming caravans.

Less than an hour into the shift on the battlements, the rest of the guards, Thorn-runner ratlings like him, were asleep. In frustration, Afheesh approached the ratling wearing the captain’s helm, also snoring in a dirty corner. The helmet was a bronze peaked open helm with a thorn design around the edges and a faded and ratty red-dyed horsetail, there was a groove just above the brow for a turban wrap, which was missing. Portions of the bronze were badly tarnished other spots were polished to mirror shine. The helmet did sport some signs of combat, blade gashes and multiple dents, all old and oxidized.

The snoring ratling once wakened turned over the helmet without argument. When Afheesh shouted out commands it only elicited grumbles and groans from the rest, so he spent the time marching up and down the guard walk occasionally glancing outside. All was business as usual.

When his shift was finally over, Afheesh went to return the captain’s helmet.

Formerly Snoring Ratling: “Just toss it in the corner. That’s where I found it. The sun was in my eyes there so…”

He stumbled off leaving Afheesh standing there looking perplexed. Eventually Afheesh threw the worn helm against a wall putting a new dent into the old bronze. He left in a huff.

Later, after first stopping by the White Rose Perfumery to purchase some sleep-poison, Afheesh met up with his cohorts at the inn for some dinner. Then they made their way to the Caskroom. There was a single remaining target to eliminate there, the bartender. It was not long before Wufcor (played by Isis) and Afheesh were engaged in a full-blown fight versus the bartender and the cook, the latter armed with a longsword. Meanwhile, Sikeek (played by Jenn) was off picking pockets of the onlooker mercenaries that populated the rear tables and benches.

After the ratlings already slaughtered the two bar-backs, the mercenaries jumped up and pursued Sikeek and Wufcor who were fleeing through the back door. Unseen, Afheesh broke off and ran out of the front door, then turned, shouted, and laughed at the mercs distracting them long enough for his other two coconspirators to flee.

The next day Afheesh got himself onto a patrol that protected the streets around “the good blocks” and took the opportunity to familiarize himself with the place. The day went slowly until a fight broke out in the Blue Lotus Well plaza among street toughs, the captain let them go after they paid a hefty “fine” which he cut the rest of the guards in on, Afheesh’s cut was 30 bronze thorns. Eventually, Afheesh was able to spot his goal, a young woman who presumably lived alone in one of the apartments. He had taken note of the building and got her apartment number by stalking her. He could feel his new troll-make weapons in his grubby little claws already.

After his shift was over, Afheesh went to the Last Rest Inn to his room to change his outfit. Afterwards, he walked to the Dancing Rat to try to find the other two. As he entered the rowdy establishment, he spotted a female ratling leaving with a familiar backpack cradled in her paws. As a result, he barred her way and did everything he could to try to snatch the pack back. However, she was highly agile and dodged nearly everything he could throw at her. Nevertheless, she had to drop the pack to recover from a successful trip when he hooked one of her legs with one of his weapons.

Afheesh snatched up his companion’s presumably stolen backpack. He introduced himself to the she-rat impressed with her skills. Her name was “Riknik” and she was not interested in working for anybody but herself. With that, she turned to run. Afheesh snatched one of five coin purses at random in the pack and tossed it to her before she ran away.

Afheesh: “Here! You earned this!”

Sure enough, when Afheesh entered the place he immediately spotted Wufcor asleep with his head on a table. Riknik, if that indeed was her name, had drugged him.

Later, Sikeek and Afheesh were dragging an unconscious Wufcor through the streets to Afheesh’s room at the Last Rest Inn. Suddenly, charging them from an alley buried in garbage came three giant centipedes.

The battle was brief but Wufcor was almost dragged away to be eaten. Eventually they got their companion to the room. Morning came and they parted ways once again pledging to make the Dancing Rat their common meeting place.

On the way to guard duty, Afheesh passed by a sanctioned duel with a green robe behind each fighter. It was a disappointingly quick match. The two brothers of the Green Well exchanged two handfuls of gold.

Afheesh (laughing derisively): “With that much money changing hands you’d think you’d get better fighters! Aha-ha-ah! I could’a taken ‘em both on! Aha-ha-ha-ha!”

All the ratling got in passing were several dirty looks. Afheesh served out his guard duty at the West Gate and in the course of the afternoon accepted a bribe from some Troll Boy gang members earning a 75 bronze thorn “bonus”. Later, he went to the Dancing Rat finding his companions there. Sikeek was drunk after losing a drinking contest sitting alongside another scrawny ratling named Needles (played by Natalie). Wufcor was sitting next to them quietly drinking keeping his drinking jack close.

Afheesh (to Needles): “So, you have any skills?”

Needles: “Aw yeah, I got all the skills! What you need, I got it! I’m good with weapons and I could balance on a leaf!”

Needles back-flipped easily onto the tabletop and Afheesh easily tripped him by hooking his ankle. Having fallen face-first, Needles suffered a bloody nose. In disgust, especially as Needles started to cry, Afheesh turned his back on the scrawny ratling and addressed the other two.

Afheesh: “We have a mission let’s go!”

Sikeek grumbled as she rose from her seat.

Sikeek (motioning to the bawling Needles): “Come along, you’re good for a laugh.”

Afheesh (mumbling angrily): “And for fodder.”

On the way to their goal, five giant cockroaches swarmed from the Blue Well itself. The fight did not last long but Needles proved himself very inefficient in combat. He was unarmed and punching the giant bugs doing nothing but annoying his enemies and allies until Wufcor tossed him a dirk. Needles killed the last with a single blow. However, as he almost died from a single bite he ran off to the nearest White Star guild. The others continued on their way to the target apartment.

After sneaking past guards and picking the lock on the door, the ratlings prepared to burgle the place. However, after carefully opening the door so that there would be no sound a human fighter in a bronze chest-plate, a full bronze helm, and short sword confronted them.

GM Cris: “Hey, he natural 20’d the listen when you guys approached the door.”