A few days later, the pair of ratling villains, Afheesh (played by yours truly) and Wufcor (played by Isis), walked 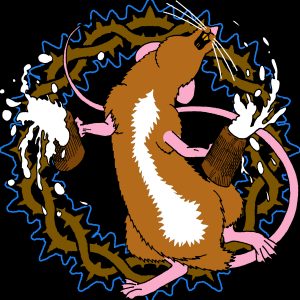 through the crowded streets at evening. The pair neared the plaza of the Blue Well and the Dancing Rat Tavern. They were going to drown their sense of loss in a sea of cheap booze. Even possibly work off some frustration in low stakes fights there and then maybe start recruiting for their own gang. The roguish pair stepped up to the saloon doors.

Overgrowth partially buried the tavern building underneath the snaking thorny vines of the Thorn-Ring. The hedge of thorns that serves as  Tangelthorn’s city defenses along gatehouses and partial fortifications at all four compass directions. The thorns spilled over the top of the three-story building canopy-like and wrapped tightly around the eastern half, the thorny vines at grips with the alien waxy-orange masonry. The ratling companions strutted into the yellow lit, smoke flooded tavern.

The thorn-creepers had extended into the bar itself cramping what could have been a spacious establishment. The woody vines shaped into a second tier in the western half of the combo taproom/common-room was crowded both atop and underneath with ratlings most bearing the light golden brown hair of thorn-runners. Tending the bar itself were ratlings and a human bar-back. On the far end, a half-troll sat on the floor wedged into his cramped station overseeing the all-sorts barrel. It was 1 copper bit (copper piece of eight) to dip your jack, no fliks accepted.

Layer after layer of compacted filth interspersed with sawdust and straw covered the floor. A fresh layer of straw and sawdust added a welcome fresh vegetable musk to the somewhat fowl and smoke-thickened air. Large scorched areas attested to the fact that the place was a fire hazard. As a result, there were water buckets on both sides of the entrance and the side door as well as behind the bar.

However, the ratling patrons used the water-filled buckets to relieve themselves thus adding a certain unmistakable bouquet to the place. It also made the extinguishing of the frequent fires a most disgusting affair. Even so, patrons still lit matches from the straw on the ground using the enclosed candle lanterns (no open flames allowed) often absentmindedly tossing them back to the floor.

The pair of beleaguered ratlings shuffled in among the rowdy crowd. Most of the tables were occupied, both of small and average size, with raucous rogues slinging down copious amounts of cheap grog and sour wine. Crowding the rear of the place, patrons at the gambling tables eagerly lost their shirts, some literally, to the house dice.

Afheesh and Wufcor settled into a couple stools at the ratling end of the bar the occupants wisely vacating their seats after being told to “scram”. Afheesh bought a pitcher of low quality ale fortified with some sort of cheap grain alcohol. As they commenced getting “sloshed”, a scrawny ratling sidled up to the disheartened pair.

This ratling was brown with white-grey spots on her face. She had on a wool jerkin, leather gauntlets, and had a horn-handled bowie knife at her side. She seemed a viable candidate for their gang.

The pair shrugged and joined Sikeek (played by Jenn) in a corner and started throwing dice. After a few small wins, Afheesh tossed a piece of quartz onto the table.

Afheesh (to Sikeek): “If you can’t pay the losses after this round against me, you’ll work off your debt in my service!”

Sikeek agreed to the terms and easily took Afheesh for his money. Apparently, Sikeek was a very skilled gambler. After that, the conversation turned to her weapon skill. She assured them that her skills at the gaming tables matched those of her roguery. As a result,  Wufcor and Afheesh took her on as a hired dagger to their cause.

Later, all three were well pickled and Sikeek’s appetite for gambling whetted. Wufcor and the new employee headed to a squat in the north. Afheesh went back to the guard barracks to catch some rest.

Early the next evening, Afheesh found himself hiding on a roofline. Wufcor hid in an adjacent alley and Sikeek was “acting casual” while leaning against a nearby corner. They were staking out the Cask Room to observe the three guards against which Afheesh had a vendetta (see last episode – Rats of Tanglethorn Pt.10: All These Roaches). They watched as two of the three guards approached the place from the west and a little while later the third from the north. The doors to the Cask Room seemed to have been opened from the inside to allow them egress.

The ratlings watched carefully and took mental notes. They also followed the guards when they left late at night. They repeated this the next day.

That night, the ratling trio had just broken up and Afheesh was loitering around the streets hoping to run into members of the Roaches street gang. He was hungry for trouble. Instead, he ran directly into a troll. The same troll that he had encountered almost two weeks prior. The little ratling recognized that massive iron maul, “Skull-Biter”, which was slung over the monster’s hill of a shoulder.

This time instead of panicking, Afheesh decided to try to strike a deal with this troll. The troll ability to forge extraordinary weaponry well-known and renowned in Tanglethorn. It was not long before Afheesh had struck a deal with Snotnack the troll. If the ratling were to bring the troll a beautiful human woman, he would and give the ratling a reward. He would forge a pair of weapons just like those that he now bore but “better”. For his new hook-guard daggers in three days, the ratling had to bring the young woman to the orange well. He would also have to call the troll’s name into the well. Of course, Snotnack bullied Afheesh into accompanying him all night long anyway.

By morning, Afheesh was exhausted and later in the evening was late for the third day of tracking the guards. This time, the trio was able to track two of the guards to a single apartment. The next night, the ratlings went to the apartment just before the time the guards would be getting off work. Sikeek picked the lock although it took a few tries. She popped the lock just before the pair of guards came up the stairs. The ratlings carefully shut the door and turned the lock, jaunted quickly to hiding places around the well-furnished room, and waited for their prey. Their ears perked as the lock turned and the door opened.