Come sun up, Afheesh (played by me) was feeling good still from the strange green glowing liquor from 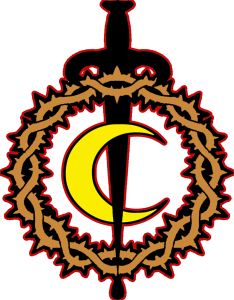 last night. For that reason he strutted down the wide street on his way to meet his two compatriots in front of the Yellow Lotus Inn where Pabst (played by Jenn) had room. He rounded the southwest corner of Mezcor’s black-stone keep when he spotted a full regiment of guards hauling away a pair of prisoners down the wide boulevard eastward.

Afheesh was in the middle of smirking to himself, “amateu…” until he realized the two prisoners were Pabst and Wufcor (played by Isis). An experienced city captain was leading the group of 16 guards, his lieutenant was to his right holding up and inspecting a glittering medallion. Afheesh recognized the polished gold medallion as that previously worn by Phenox, an acolyte of the Brotherhood of the Green Well, who they collectively murdered and decapitated for a bounty.

The ratling quickling was just about to turn around and consider recruiting new companions. However, at the last minute turned on his heel and began stealthily to follow. His aim was the captain; he easily prowled into the crowd even under the noses of his companions and crept up behind his target. Suddenly, the captain glanced to his side and asked, “hey little ratling what business is this of yours?”

Afheesh (sputtering in surprise for a second): “Um, What’s going on here? With them.”

The Captain (with increasing levels of braggadocio): “Well, looks as if we caught ourselves a couple a’ killers. They murdered a popular apprentice of the Green Well. Robbed ‘im and cut off his head. Taking ‘em to the Green Well to see what they wanna charge ‘em with.”

The greying, scarred old captain adjusted his belt. Afheesh was at a loss but was curious how this was going to play out.

Jenn: “I don’t think I like games where we play evil.”

Afheesh thought a little about the situation. He gazed back at his colleagues.

Afheesh (to the Captain): “Soo, what are the benefits of being a guard anyway?”

The Captain: “Ha, ha, you wanna join the guard little ratling? Well, just follow us! After we pick up the charges and return the medallion, we’re headin’ back to the Main Gate. That scum there will face my judgment then. Heh, don’t worry I’m a fair man, I always let the guilty have their say before I execute ’em!”

Afheesh puffed out his chest and proudly marched alongside the captain and the guard as they completed their circuit.

Jenn: “I guess this is kind of my fault.”

Cris (the GM): “Well you put that thing on…they tracked it to your room *sputter* and you WEARING it when they busted in! *shrug*”

When the company reached the main city gate just southeast of the Green Well, Afheesh was sent for outfitting while the prisoners were tried in the training yard. The ratling met with one Sergeant Neek whom issued him his kit. He was given a beaten-up wood buckler, a dull bronze skullcap, a short spear fit for his size, and a dirty brown cape fit for his size bearing the thorn ring symbol in black. Pay was 100 bronze thorns (bt) at the end of each 7-day but actually 85 in coin since 5 are for Mezcor and 10 are for taxes.

Sergeant Neek: “And you have to serve at least the greater part of each day that week to get paid! Your first mission is to report to the gate and help me escort the new prisoners to the Tree of Judgment.”

Afheesh: “Wait. How do you already know they’re getting sent to the tree?”

In response, the sergeant just puffed derisively and motioned for him to hurry. In Tanglethorn, the execution of criminals often involves tying them to a tree far outside city thorn-barrier. Typically, something comes along in the Poisonwood that eats and/or kills them soon after abandonment.

About an hour later, Afheesh, in his full guardsman outfit, followed the group of guards as they transported the two prisoners along a barely visible road through the Poisonwood. The two criminals had been stripped naked and were stumbling barefooted through the spiny, spiked, and thorny autumnal waste. They were being dragged behind a strong-wagon by chains and manacles, consequently their feet bloodied and covered in pale thistle burrs and bull thorns.

The wagon was plated in thick bronze plates iron-riveted to the heavy wood frame. Razor-sharp spikes lined its bottom edges and covered its roof; the driver enclosed by chainmail netting. Afheesh kept an eagle eye on Wufcor as the company reached an area of thick dull green overgrowth.

Afheesh (jamming the butt of his spear into Wufcor’s stomach): “Shut up you pig!”

Suddenly, a large green seedpod emerged from over the bushes and a long purplish spike shot from it lodging in the neck of an unfortunate human rookie guard. Hence, he was sucked dry in almost an instant. So, Afheesh immediately launched himself at the creature slashing it to death with his paired hook-guard daggers. Another previously unseen plant monster emerged and swung a seedpod fist at the ratling but missed. A hard wooden seed shot into the ground narrowly missing Wufcor from yet another plant monster as it emerged from cover. Another creature emerged and stabbed at Pabst with its purple tongue but it missed. Another tongue from yet another creature darted at Afheesh but he easily avoided.

The guards were in full combat against a fair number of these plant monsters, three monsters and five guards were killed in the first minute of fighting. Another tongue stabbed at Afheesh as he dropped a second plant creature. As the fighting began to die down he could see that only seven guards remained and but two monsters still stood. He immediately leapt at and dropped another monster.

Four nameless guards managed to take down the last creature. Afheesh facetiously congratulated the lot of them on killing a single creature together as compared to his three by himself. They sneered at him. Another guard suddenly shouted, “The prisoners, they’re escaping!”