The ratlings, Afheesh (played by yours truly) and Wufcor (played by Isis) took a corner table at the rear of the 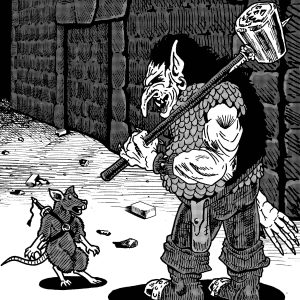 Green Bottle Tavern. They had crept in unnoticed by the barkeep and trio of patrons. Pabst (played by Jenn) had ordered a glass of Assassin Vine Wine and a pitcher of ale. She chatted up the bartender, his name Neelneez, Neel for short. The trio was seeking Captain Fenom’s promised bounty.

Not far from Pabst, the barfly druid eyeballed the interior of his empty jack. She invited the elder over and shared the pitcher with him. He was grateful but had no information. Disappointed she looked over at the pair of Green Well apprentices further down the bar. They were embroiled in a drunken conversation and thus paid her no heed. Seemingly, in reaction to her gaze they moved to a table further away.

Observing from afar, Afheesh took the initiative and darted around the place unseen and under the apprentices’ table. The pair was gossiping about another apprentice they did not like, one that was to be promoted to Journeyman in the guild. It took some time but eventually they mentioned his name, Phenox. Immediately Afheesh darted from the table over to Pabst and relayed the info. She lithely rose from her spot next to the blubbering druid and approached the apprentices’ table with a fresh jug of wine.

However, the first of the pair was rude and the other laughed waving her away. Afheesh who had already stolen under the table unseen pulled one of his weapons and jabbed the tip into the rude one’s crotch.

Pabst calmly talked with both of them trying to get the whereabouts of her target, Phenox, from the pair but they did not want to see their “brother” dead. Afheesh pulled his second weapon and jabbed it into the crotch of the second apprentice. He drew a drop of blood from both with the razor points of the weapons.

Afheesh: “Take us to him NOW!”

Pabst (amused): “Seems my little friend under the table is getting impatient.” She waved at Wufcor to dissuade him from slitting one of their throats from behind.

Eventually they gave a detailed description of Phenox and revealed that he would be at this very bar later that evening to celebrate his promotion. Shaking, the rude apprentice chugged down his jack of wine. Pabst dismissed them both with a casual wave of her arm. Both of them bolted for the door. Afheesh and Wufcor went in silent pursuit. Pabst joined the hunt after the pair had cleared the saloon doors.

The hounded pair had split in different directions Pabst pursued the rude one. Afheesh and Wufcor chased the other. He made it as far as the vine-covered wall that cordoned off the grounds of the Green Well from the rest of the city. He hit a patch of shadow and that was when Afheesh leapt at him with both blades. It was an instant kill. Wufcor looted the body.

Later, the pair of ratlings rejoined Pabst in front of the Green Bottle; she had easily done in the other apprentice when he turned down an alley. Pabst wanted to wait in the alley across from the joint for Phenox’s arrival. However, Wufcor wanted to sit and drink in the Drunk Lotus until dusk instead. It was north of the Red Lotus Well and a place run out of the back of an apartment building with the benches in the alley behind with a canvas tarp overhead.

Afheesh surmised the place had the worst grog and gruel in the city but it was cheap, a few bits for some drink and “food”. The trio stayed there until dusk. They went back to the Green Bottle and found the place crowded and jumping with perfumers, there were many green robes. The guest of honor of a party near the bar was one Phenox newest journeyman of the Brotherhood of the Green Well. A polished gold medallion hung from his neck inscribed with the image of a lotus and set with emeralds gleaming as it dangled on his chest.

He was soaked with ale and wine and sloppy drunk as various patrons had been buying him drink after drink. Afheesh darted over to a place at the bar. For a lark, the ratling paid 25gp for a shot from the green bottle for Phenox. As the bartender handed the glass to the journeyman, he turned to point out his beneficiary but the ratling is gone. Shrugging, the young man took it down and the whole place erupted in celebration. He was still standing after a sip from the green bottle! Shortly after that, Phenox stumbled drunkenly out of the bar, alone. The murderous trio swiftly followed.

As soon as he neared the first dark alley, Pabst rushed him into the trash-strewn narrows. Afheesh and Wufcor then made quick work of him. Pabst hacked his head off and bagged it. She also pocketed the gold medallion. After their red-work was done they hightailed it straight to captain Fenom.

The rough captain pulled the head from the bag and mocked it slapping its cheeks. He was very pleased with the three brigands. The captain tossed a sack filled with the bounty of 9,000 bronze thorns. After the split, the brigands were each parting with 3,000 bt.

Captain Fenom: “By the way, you three, be back here tomorrow a couple a’ hours after sunrise.”

The three shrugged and parted ways after leaving the captain’s office.

Afheesh wandered aimlessly through the streets of Tanglethorn for a few hours until he turned a corner and found himself face-to-face with a large troll. The creature was gigantic in comparison to the little ratling. It was wearing scale-mail armor and carrying a massive iron maul. The hammer had a skull wearing a fang-lined grimace inscribed on the flat.

The Troll (pointing a clawed finger at the weapon): “He named Skull-biter. When I swing, him swallow the skull and he leave me the brains! Haw! Haw!”

The ratling was thinking of running but his legs would not cooperate.

The Troll: “Now you little ratling will help me find me a wife or I step on you! Squish you like bug!”

Afheesh wanted to disagree but was still easily bullied into assisting the troll in his wife seeking. He had to climb storm drain pipes, peek into windows, and peep over walls all at the end of a rope tied too tightly to his tail. He seriously had considered hacking through his own tail to get away but just could not bring himself to do it. The troll kept him at this fruitless quest until just before dawn.

Right before the sun rose the troll let the ratling go free and sank into one of the wells, Afheesh did not take note of which well. The ratling ran back to the burned out temple. He was able to fetch a couple of hours of sleep before he had to rush to meet the other two at the captain’s office at the White Rose Perfumery.

When he finally made it he saw that the captain and his men were fully equipped and in formation. The ratling’s partners were standing next to him wearing the same cloaks as the rest of the guard, green with an obsidian oak leaf clasp. Their expressions did not fill the ratling with confidence. The captain turned towards the ratling. He motioned a subordinate who handed him a small version of the same cloak. The black and green plume in the captain’s helm fluttered in the slight breeze as he held out the cloak to Afheesh.

Captain Fenom: “Put this on, we’re marching out!”