Afheesh (played by me) yanked his bloodied weapon from the throat of the Bronze Boy at his feet. The 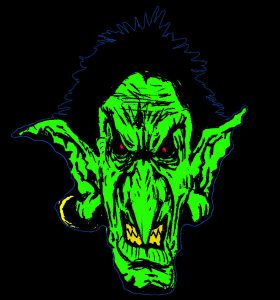 ruthless trio had just made quick work of a small group of Bronze Boy gang members. Consequently they had looted some 40 bronze thorns (bt’s), 4 dirks, and 4 saps. Pabst (played by Jenn) collected their bronze badges, their gang colors. Wufcor (played by Isis) suggested they all take the badges to the Troll Boys’ hangout, the Bloody Tankard, to see if they could score some free drinks.

It was not long after the three found themselves before a rundown saloon front. It was of pale cracked wood built onto the ground level of one of the old orange stone buildings. A hot yellow light poured through the entryway as did a pungent stream of smoke. Hanging from the placard hitch was a broken tankard, brown stained or rusted they could not tell which. There was a large group of Troll Boys out front guarding the door. A few appeared to have troll blood oozing in their veins but most were human. Pabst was the first to approach.

Pabst (tossing the Bronze Boy badges to the dirt): “How many drinks are these worth?”

The Ugliest Troll Boy (spits on the badges): “Maybe a half jack! We do our own fightin’, we don’t pay others to fight fer us!”

Pabst (undeterred): “Well then, do you Troll Boys have any GOOD fighters among you?”

The Ugliest Troll Boy laughed at her and poked his head into the bar from over the saloon doors. Consequently he shouted a name none of the trio could make out, it could have been in trollish for all they knew. However, to their relief a human stepped to the door. He walked slowly out to the creaking plank porch with an air of supreme arrogance about him. He had a scale-mail vest and gleaming bronze bracers on his forearms. Circling Pabst for a few seconds and smirking said, “You’re too wounded to fight me tonight. Come back when you’ve healed and meet your death at the edge of my blade”. With that he turned heel and walked nonchalantly back inside.

The trio parted ways shortly thereafter. Pabst and Wufcor headed off to find a White Star Guild house of healing and then back to the Yellow Lotus Inn to rest. Afheesh headed to the livery for food and some simple companionship for the night.

Several hours and 1,500 bt’s later at dawn Afheesh arrived refreshed and impatient in front of the Bloody Tankard. The place was shuttered until noon. The other two arrived sometime after with Pabst appearing fully healed. When they had seen the place was shut tight for another few hours they decided to go to the nearest armorer. There Pabst purchased a high quality bronze medium shield for 1,400 bt’s.

On the way back to the Bloody Tankard the ruthless trio was assailed from an alley by three giant earwigs. They made quick work of the monsters with Afheesh slaughtering two of them and Wufcor and Pabst slaying the last.

It was not long after the three were again in front of the Troll Boys’ clubhouse. The fighter that Pabst had challenged the previous evening was sitting leisurely on a chair leaned against the doorframe, his booted feet up on a stool. At his side was a rapier-like weapon with a razor-sharp polished blade, a full brass knuckle-guard, and a pommel spike. He was a professional swordsman, a Quick Blade.

The Quick Blade (taking his pipe from his lips): “So, what is it that we are dueling for?”

The trio proposed that the prize be a shot from the green bottle at the Green Bottle Tavern. The Quick Blade agreed and then terms of the fighter were worked out, drawing first blood would make the winner. That last stipulation was Pabst’s idea by the way.

As the gathering crowd of Troll Boys and curious passerby marked out the ring, Afheesh slipped into the Bloody Tankard unseen. He found two locked doors of interest in the empty bar when he heard the crowd lament then the Quick Blade and the Troll Boys laughing in victory. He darted back outside.

The Quick Blade had drawn first blood on the very first strike of the fight.

Cris (the GM): “Well, his back is turned to you and the Troll Boys are congratulating him.”

Isis: “Sis! We might be over our heads here!”

Later, that evening the trio, the Quick Blade and five Troll Boys sat at the bar in the Green Bottle. Afheesh had already put down the money for the shot from the titular green bottle. The Quick Blade held up the small glass with green swirling liquor in it.

The Quick Blade: “Whosoever would duel over this shot may have it as their prize!”

Afheesh (looking back at his companions and shrugging): “I paid for it, it’s mine.”

Suddenly, the troll-blood lunged and struck with his dirk missing the agile ratling. As a result Afheesh jabbed with both blades striking deep, wounding the troll-blood badly. In desperation, the Troll Boy slashed narrowly missing his target (by 1 pt.). So Afheesh retorted killing the Troll Boy instantly.

The Quick Blade (sliding the shot glass over to the ratling): “I guess this is yours.”

Without thinking, the ratling slung it down and when it hit the bottom, he began to feel dizzy. However, he did fight off the dizziness and as a slight drowsiness faded, he felt strangely invigorated. Meanwhile, the Troll Boys grumbled as the swordsman led them out of the tavern. Finally, Wufcor approached Afheesh and gave him a small sack of coins.

Wufcor: “I made a little side bet. Here’s your share.”

The purse contained 150 bt’s so feeling very refreshed by the strange green booze, Afheesh decided to take his leave and go back to his favorite place, the livery. A jaunt in his step he whistled as left the place.