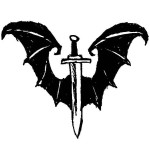 had abandoned upon surmounting the White Heath. Vorwulf used his jeweled gold closed helm and enchanted the craft with the Mysterial Chariot spell. In an hour and a half they were at the gates of the Hill-lander town of Aáhké. The gate guards’ shields were all now painted with the arms of the town: a gold chalice before a split field of white and red with a golden mace and sword crossing behind the chalice. As the slayers plus Xanto the Wasp approached the captain of the guard asked Vorwulf, “Wha’ happened ta’ ya’a fellas?” Vorwulf proceeded to go into full-on brag mode. Before the triumphant ranger/dragon-slayer could finish his self-aggrandizing speech the captain waved them through and as soon as they were through the gates the group split up almost immediately. Though they had been victorious and were reveling in the afterglow they appeared haggard, covered in road dirt, covered in scabs, and were still exhausted.

Vor was already sitting down to a table at the Red Ram Tavern with a full tankard of ale and a bottle of whiskey before he realized that he had forgotten to officially arrest the Wasp and detain him as was his duty. He just shrugged and began to put one on. Meanwhile Grom the shaman had kept his head about him and followed the Wasp as soon as the group split going in all different directions. He lost sight of him for a second and the Wasp was gone. He had lost him. Magiia the dragon-blood-warrior was already headed to her room at the inn intent on spending her time refining more dragon-blood potions. Grom joined Vor and later they both spent the night in Maggi’s room.

Come morning before even Vor could wake, the shaman had already tracked down the Wasp and about an hour after sunrise had guided the group to a make-shift tavern consisting of a canvas tent and a covered wagon next to the Aáhdrahké distillery in the West Quarter along King’s Walk. When the slayers arrived they saw Aáhdrahké clansmen everywhere and what appeared to be a caravan queuing next to a small courtyard. From a carriage bearing the mark of the Aáhdrahké, a blue bull with white horns before a solid green field, painted on it stepped the Xanto. He was in native finery with a cape of black silk with the embroidered clan mark on display, a pair of soft felt shoes with jeweled buckles, and a fine silver capped walking stick.

Vorwulf (played by Cris): “You! Wasp! Get over here! You’re under arrest by the authority of the Blackwings Dragonslayers Guild of Hirok-Nor!”

Xanto immediately jaunted over to the slayers filled with nervous energy: “Friends! Friends! What a surprise! Hehe. Um, can’t we work something out make a deal. C’mon we’re friends right? C’mon! I saved your @$$es up there in case you were not aware! Guys?”

Grom and Maggi kept a stoney gaze with hard expressions directed at jittery and smiling Wasp-mage.

Vorwulf (gesturing to the clansmen): “This man here, Xanto the Wasp has a PRICE on his head! The Blackwings guild will pay any man here who manages to bring him in.”

This started Xanto to start raising himself up and down on his ankles trying to shush the irritated alderman. “Wait! Wait. Hold on friend for just a second.” The skinny mage turned and spotting what appeared to be a noble or at least someone of importance wearing a similar outfit but with a tartan across his chest who was exiting the main building. He ran up to this man, a full-blood faun, and it appeared for the next minute or so that they were arguing but soon enough the noble gestured his men and they brought forth an iron chest from the strong-carriage in the caravan line.

Grom (played by Gil): “Don’t worry guys I got ‘em. Maybe I can turn ‘em all into chickens.”

The strongbox was opened and the noble paid out the 10,000 gp bounty on the Wasp’s head in gold talons to the slayers which they happily accepted.

Gil: “Hey. Why are they protecting this guy?”

Cris: “It’s whatever he took from the mushroom; you KNOW he took a piece of it or something.”

Vorwulf (looking the Wasp right in the eye): “If you ever step foot in Merdna or we catch you anywhere near Hirok we’re gonna arrest you and ship you to Chago!”

The Wasp (with s#*t-eating grin): “Don’t worry it’ll all get squared away! Are we not on good terms again? Besides I’m headed south. Maybe we’ll share a drink together!”

He took his leave at about the same time the slayers took theirs them being eager to get back home.

They soon picked up some supplies (mostly bottles of whiskey) and headed south back to Hirok-Nor and their adopted hometown of Merdna. While coasting down Barbarian’s Tread the surpassed the Aáhdrahké caravan noticing it too was going south.

Grom: “Man! Is he gonna make us arrest him?”

After a couple of days and a battle with some Night-Trolls and a Formorian they arrived back in Merdna. The workman were assembled and digging ditches for the foundations of their guild house and dismantling the West Gate and setting a temporary palisade around the construction site. They arrived at the Hopping Rat and could see that Bers’ memorial statue had been finished and was standing in their courtyard. As soon as they entered Og and Trasknor (Grom’s & Vorwulf’s protégés respectively) whom were tending the place got them up to date on happenings round town leaving Ebor the bartender to man the board. Kyrahma had been spotted by them both transformed back into an amazon on the night of the green moon smashing the place up before she ran away, they haven’t seen her since. The framing for the guild house will be up by next summer; the foundation excavations are proceeding. Street crime even with the tat-eyes on the street is getting bad as more and more of former Black Soldiery are filtering in the cheap black paint cleaned off for the most part. Vezik the druid had sent a leather wrapped parcel for them in the back that had arrived a few days before. So the slayers went into the back past the tat-eye ratlings, no doubt agents of their criminal “guild” keeping an eye on the place, to see what it was. The slayers took the rest of the day off and on the following day spent it wrapping up business.

They had gotten the deed for Raven’s Eyrie in Grom’s name instead of the guilds from Lord Vorahd and Vorwulf sent off a magical pigeon to the Chago Blackwings. Vorwulf also used the 150 star-metal ingots from the group treasury to commission some breast plates, and axe & spear heads for the gate guards. As a celebration that evening Vorwulf opened the carved stone bottle he had purchased from Ole’ Twist back in Aáhké (see the Dragonslayers III Pt.20) in the rear storeroom of the Rat. They proceeded to ‘battle’ the whiskey elemental that exploded from it. Grom attempted to tackle the thing but belly-flopped onto the table and had his head engulfed in whiskey, he soon passed out due to extreme inebriation. All the while Vor and Maggi were scooping bits of the unfortunate creature up in their gold chalice and fine drinking horn. It was Maggi that drank the last gulp as Vorwulf passed out cold after his fourth or fifth chalice-full. The ferenoi stumbled out into the tap-room and “hung out there” until dawn.

Next afternoon, about the time all three had finally sobered up, they were given a letter from Xanto which he had left with Ebor. The Aáhdrahké caravan had passed through town the previous night and the Wasp had dropped in for a drink. The message ran as thus:

Too bad we couldn’t have a last drink together but I’ve gone South to a place called Skullhead to see some friends, brothers by the name of Dracorian. I’m sure you’re unfamiliar. Anyway.

P.S. – The wand I used to transfer that one book to the other is behind the seal.

They sat around thinking about it for a while until near the end of the day when it struck Magiia. She checked the area for the seal that had been stamped on some of the oldest bottles in the cellar and found a stone above the hearth bearing it. She reached up to the gryphon seal above the hearth and found it opened having a hollow behind it. Within the hollow they found a golden rod and a scroll describing its use. They could finally transfer the Tome of Dragonslaying from the troll-tome back to its rightful binding.

Grom the Shaman took up residence in Raven’s Eyrie where he began his research into things arcane. Magiia spent the rest of her life on constant dragon-hunts alternating between that and bouts of heavy drinking in the Hopping Rat. Vorwulf was eventually officially named guild-master of the Hirok-Nor chapter of the Blackwings Dragonslayers’ Guild, and spent the rest of his life funding repeated expeditions into eastern Cleft-Rills in search of the ultra-rare Brown-Spine Dragon he’s sure was there but to no avail so it may still be there somewhere. The Tat-Eye Ratlings kept up their end of the contract with the Blackwings and rose to a level of power equal to that formerly enjoyed by the Crossed-Staffs had been dominating the region and frequenting the Hopping Rat which has a massive mural along one side of the outside walls portraying Magiia slaying the red dragonlord with the other two standing behind her, commissioned by Maggi of course, and the statues memorializing Dead-Eye and Bers stand in the courtyard of the Hopping Rat marking their graves the urns containing their ashes being buried at the statues’ feet. After the erection of the guild house, the Blackwings became the biggest name in dragon-slaying in the pan Norusk/Hirok-Nor/Cleft-Rills region.

The End of the Third Dragon-Slayers Campaign (played between February and September 2015).