Just in time Grom cast Protection from Elements (fire) on the Ferenoi before she was out of his reach. Magiia dashed between the ruined gate towers and leapt behind one of the large boulders to the side of the now revealed pit trap that had almost claimed Vorwulf. She peaked around and spotted a 10 ft. tall half-dragon partially concealed by a boulder about 45 ft. straight ahead in the cleft that lead via a slightly twisted path to the inner gate. The large guy behind the boulder was a human with vaguely draconic features with patches of bright red scales over most of his visible skin. He was wearing a scale mail shirt with a steel pectoral plate held by a cross-harness over that, a pair of spiked bronze bracers on each arm with bronze greaves on his legs, and a polished bronze open helm on his head which was decorated with a pair of nine-point deer antlers and red horsetail tassel streaming from the peak of the helmets crown. From his neck dangled a large gold medallion bearing the mark of the dragon. He was armed with a superior quality heavy two-handed spiked great mace. She couldn’t wait to sink her axe into him.

Grom the shaman stopped and tried to take as much cover as possible where he stood still between the decaying gate towers and by chance caught sight of the hidden archer whom was squatting camouflaged in a large clump of shrubs 10 ft. up on a ledge at the start of the cut-path at the base of a still intact crenulated wall. The archer was another human half-dragon with red scales and equipped with a steel pectoral plate, a wolfskin mantle, spiked bronze bracers on his ropey forearms, and a pair of bronze greaves protecting his legs. He had a gold medallion bearing the mark of the dragon around his neck, a red hip-bag, and a full hip-quiver filled with excellent and a few evil looking arrows. He was currently armed with a composite short-bow which was training on the shaman. Grom shouted and pointed the archer out to Vorwulf.

Vorwulf spotted another ducking behind a clump of woody shrubs just about 10 ft. across from the larger half-dragon, this one appeared to be a human dragon-shaman equipped with a red gambeson, a studded wide red leather belt with a red hip-sack, and a bishop’s mantle. He also bore similar spiked bronze bracers on his arms and bronze greaves on his legs. He was armed with a superior quality longspear with a pair of throwing glaives dangling from his belt. His skin was covered in a layer of red scales and his nose was pierced with a polished half-moon of boar’s tusk. The ranger could see the glitter of gems off of the rings on his fingers and from the gold medallion bearing the dragon’s mark around his neck.

Cris (Vorwulf’s Player): “Oh yeah of course! Of course they do!”

Jenn (Magiia’s Player): “Oh great! Are we gonna be able to hit these guys?” Referring to the cannibalistic barbarian’s they had faced several days previously (see The Dragonslayers III Pt.24: The Mark of the Dragon).

Vorwulf shot an arrow at the Nose-Bone dragon-shaman. The medallion glittered with a magical light and the arrow immediately turned and shot back at Vorwulf who barely parried his own arrow with his magical buckler. The half-dragon juggernaut from behind the boulder surged forward towards Vorwulf’s position. Vor caught sight of a dark feathered shape flapping its wings and slipping from the battlements at the top of a nearby tower atop a 10 ft. bluff to the west. It disappeared from sight as soon as it was clear of the shadows. He could hear something set down lightly on the boulder just behind the one behind which Maggi currently took cover. Nose-Bone stepped from behind the bushes and attempted to cast a spell but failed. The hidden archer took a pot shot at Vorwulf but the black arrow shattered on the ranger’s buckler.

Maggi pushed away from the boulder and charged the juggernaut, her obsession with killing dragons ultimately taking over, with a mighty battle-cry as soon as she reached the half-dragon juggernaut the ground before him exploded in a blast of fire but she was protected from the flames by Grom’s spell; undoubtedly a trap-spell cast by Nose-Bone. She swung but was easily parried. Grom cast mass bull’s strength granting his comrades and himself a badly needed bonus to their strength attributes. Vorwulf shot in the hidden archer’s direction (he missed the arrow zipped uselessly into the thicket) and moved away from the boulder on top of which he knew there was something he couldn’t see. The juggernaut nailed Maggi with his mace wounding her. Nose-Bone moved further back nearing the boulder from behind which Juggs had charged. A glaive flew unexpectedly at Grom whom dodged (barely). It had come from the top of the boulder on which Vor had heard something land. Now however, it was visible having made an attack dispersing the spell that had kept it invisible until now. On top of the rock was squatting a draconian with red-brown scales and with black feathers over its head and its black wings appeared as those of a large black raven. The creature was wearing a bright red gambeson over which was a steel pectoral plate held in place by a cross harness and spiked bronze bracers on its wrists and bronze greaves on its legs. It was armed with a superior quality quarterstaff and from its belt dangled a single superior quality throwing glaive.

Another black arrow with bright blue feathering shot from the thicket at Vor and exploded in a seismic blast which Vorwulf, thanks to his Improved Evasion feat, was able to completely evade. The blast was fortunately far enough out of the way not to catch anyone else in the area of effect. Maggi undaunted swung again at Juggs this time connecting with and dispersing the invisible magic shield that surrounded him his medallion burst with gold light. Vorwulf still armed with his longbow turned and shot at the top of the boulder striking a shield surrounding the feathered draconian. The juggernaut smacked Maggi with a Natural 20 and could’ve killed her in a single blow had she not previously activated the shield ability on her helmet. The draconian replied to Vorwulf’s arrow with his last glaive which Vorwulf masterfully parried with his buckler. Nose-Bone retreated behind the boulder out of sight. Another black shaft shot from the bushes and nailed Vor dealing some damage. Maggi replied the juggernaut’s devastating blow with one of her own which smashed away his final shield of the day signaled by the glow from his medallion suddenly going out with a pop. Grom slung a spell at the thicket in which the archer hid causing it to squirm to life and completely entangling and immobilizing him. Vorwulf tried to get another shot at the feathered draconian but fumbled burying the arrow in the dirt. Meanwhile the juggernaut smashed into Maggi this time as she hadn’t had a chance to re-activate her magic shield and blood gushed. Again Vorwulf shot at the draconian and again struck a magic shield but the light from his medallion also went out with a pop. Juggs hit Maggi again wounding her fairly badly this time.

Magiia leveled a power attack at the juggernaut burying her axe-blade deep in his flesh. Vorwulf buried and arrow with a Natural 20 in the feathered draconian who shrieked in pain. The juggernaut answered Maggi’s powerful hit with his own which only by the breadth of a hair she was able to deflect. Grom moved to the rear of the Ferenoi Maggi and used his healing touch to keep her standing. The draconian flapped its black wings and flew roaring at Vorwulf in an attempt to catch the ranger in its powerful and venomous jaws. Vorwulf dropped his bow, quick-drew his scimitar and cut into the monster with a simultaneous attack killing it. The strange corpse petrified into stone while still in the air and crashed to the ground. Maggi activated the Shield ability on her helmet and let loose with another power attack at Juggs opening another wound. Vorwulf stuck his swords in the dirt and grabbing his longbow back up knocked an arrow let off a wild shot at Nose-Bone pinioning him with an arrow wounding him badly. The juggernaut again tried to finish Maggi with another insanely powerful blow but only managed to smash away the shield spell surrounding her. Grom cast a Heal Other spell on Maggi trying to assure her survival. Nose-Bone peeked around his boulder and cast Fire Bane at Maggi. The Protection from Fire spell that Grom had cast over her protected her fully however Grom forgot to cast it on himself forcing him to make a Recovery Roll to keep standing. Vorwulf put away his bow, snatched up his swords and went for the juggernaut but his single blow was easily swatted away. Maggi leveled another axe-blow at Juggs taking another chunk out of him. Vorwulf now side-by-side with Magiia struck at and hit the juggernaut dealing very little damage. The half-dragon replied with his spiked mace but the blow was deflected far too easily off of Vorwulf’s buckler. Nose-Bone activated one of his rings and a Swarm of Magic Missiles, 5 each, struck the three slayers. Grom called down the lightning from the sky blasting the dragon shaman with the nose bone into a smoking ruin barely recognizable as a corpse. Vorwulf again struck at Juggs but was again swatted away.

Finally with the upper hand, the slayers began hammering away at the juggernaut even Grom after pulling his morning star of supernatural might and tightened ranks with his two companions. It was another full round of bashing, chopping, and slashing before the impossibly tough villain was finally dead. The only one of the slayers not on the verge of death was Vorwulf who was still very wounded.

They began swilling potions as the shaman wanted to preserve some of his spells for the dragon. It was then that they turned their attention to the still entangled archer.

Grom cast bestial might on himself and flew up above the head of the half-dragon archer and pulled out his dagger. 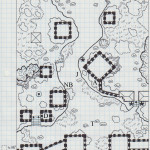 GM Copy of the battle-map