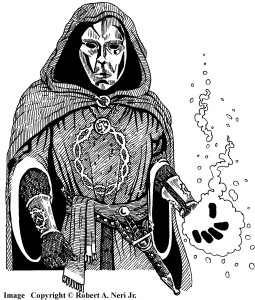 Upon the unfortunate turn of luck with the last mage I played and his traveling companions Jen, Gil and myself got about making new characters. Cris informed us that we were going to keep moving forward in his campaign and would start in the same venue, the town of Rockhollow whose mine is recently defunct as it suffered an unknown disaster and was now completely flooded and mostly collapsed. Lessons learned, I decided to roll up another mage.

His name, Baerig Scar-Born a native of Tanglethorn, the poisons of the Poisonwood probably responsible for the deformities he’s suffered since birth. He was born to a whore-priestess dedicated to the Satyrina goddess Bastana. It was within this powerful cult (the secret face of the Livery of Pleasures prostitutes’ guild) that he was first exposed to the magic arts by his mother and the other prostitutes. It was soon recognized that he had a certain natural talent for the arcane arts.

When he turned 12 he was sent to serve the Brotherhood of the Green Well where he was trained & educated to the level of novice but soon realized that he would not be allowed to advance further in the hierarchy due to the very nature of the institution itself (described in brief in the Arvan: Land of Dragons setting manual to be published soon). It didn’t help that he was seen as reckless and quarrelsome as well. He has an appetite for strong drink, food and Yellow Lotus. He also mumbles a brief prayer before the first drink or hit an intoxicant due to his exposure to the cult of the Satyrina. He was unceremoniously expelled after completing a ritual that granted him the Eldritch Ability of Acid Bolt which severely scarred his body and destroyed a brotherhood lab. Seeing he was never inducted into any of the brotherhood’s litany of secrets he was simply booted into the streets instead of being killed. He quickly shifted allegiance to the reigning lord of Tanglethorn whom was soon overthrown during a violent coup.

Baerig fled discarding the dead lord’s arms which had been sown to the breast of his pale green robes. He hitched a ride with an Ivoran Merchant Caravan leaving the city and the entire Poisonwood behind.

Originally dubbed Baerig Whoreborn, the title which he detests, has 2 older siblings named Deevir Softskin (a sister) and Haavor Hardknuckle ( a brother) with both of whom he has had limited contact. He knows who his father is as he is the result of a ritual sex-act but a grave disappointment due to his deformities which consist of a slightly contorted frame and large lumpy growths about the face. His father, Haevor the Wyvern’s Flame apprenticed him while he was a novice for the brotherhood; essentially he was just an errand-boy, being a member in high-standing but was somewhat negligent in favor of another. Another member stepped in to become Baerig’s true master,  a mage in lower standing to his father and who now is very likely dead.

Baerig Scarborn appears as a tall and slender human of approximately 120 lbs and 6’7”. Dressed in a pale green cloak and cowl with matching robes that have a gold-leaf emblem of a ring of thorns with nothing at the center. He wears a bronze mask made in the image of a gender-neutral but beautiful countenance which is expressionless and has a single black tear enameled under the left eye. He also has knee-high soft leather boots and gloves as well as bronze bracers bearing the thorn-circle motif with the image of a pair of crossed daggers within. He always is careful to keep every inch of his ruined flesh covered and seeks to amass as much arcane knowledge as he can.

He is of the Chaotic Good Unprincipled alignment and his personality is “gung-ho, guts & glory type; sees self as hero; likes combat.” His I.Q. and M.E. are his highest attributes being +7 and +6 respectively. His DEX and CON are fairly high as well as both being at +4. His flaws are Slow and Disfigured and has the Apprentice concept as well as having Spellcraft as his family skill (coming from a guilded family). He has also chosen Mage as his favored class. His inborn traits are Chemical Tolerant and Naturally Wise.. His most notable abilities are his Eldritch Talents which are Teleport I and Bolt of Acid which lowered his AUR and BEA attributes leaving him with an AUR of -3 and a BEA of -4. His most valuable piece of equipment at start was a Bronze Amulet which provided a Damage Reduction of 2 as magic armor.

Baerig met Tweena, a Dungeoneer played by Jen and Drogo, a ranger played by Gil on the caravan all sticking with it for an undetermined length of time but long enough to get to know each other well. When it made a stop-over in Rockhollow about midsummer we decided to seek our own fortune in this place letting the caravan move on without us.