The dark trio of Jíen the necromancer (played by me), Trantox the assassin (played by 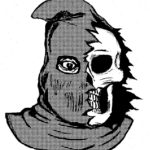 Jenn), and Dravor the blackguard (played by Gil) found themselves settling into their bedrolls in a barren room of a deserted adobe apartment building. A few piles of detritus and some debris from the crumbling wall-plaster the only décor. Each settled into their own corner to sleep.

Later, Jíen was shocked awake by Dranor’s shouts. The necromancer awoke to find his companions cornered on the opposite side of the room from him by four black-hooded dagger-wielding rogues. They had not stumbled onto the young necromancer since he had camped out by the entrance and they had apparently gained entry through one or both of the glassless shudder-less windows along the outside wall. Jíen’s skeletal minion was standing between him and the group of hoods.

The necromancer leapt to his feet and cast an empowered Wound spell on the nearest thief. The sudden twinge of the masked man’s body told Jíen his spell had been effective. His skeletal minion continued to guard its master against approach. Trantox ducked behind the larger Dravor to load his crossbow.

A hood stabbed Dranor and another jabbed Trantox hurting him badly with a lightning fast flash of the blade. Another turned and lashed out at the minion, which parried the clumsy blow easily with its boney claws. The thief who had felt the sting of the necromancer’s magic turned and stabbed Jíen wounding him while Dravor clinched a thief’s dagger on a parry. Jíen stepped back and cast Animate Necrosis on his attacker. The necromancer’s back mashed against the damp disintegrating plaster, but the resultant scabby tendril failed to take hold of the man’s throat.

Trantox stepped out to shoot a thief whom tried to parry the crossbow itself but failed miserably getting shot and badly wounded in the process. The thief clinched by Dravor’s axe wrenched his dagger free and his dagger stung at the black guard whom barley was able to knock the blade aside. Trantox pulled his silver dagger and slashed but the hood dodged his blow easily.

The hood on the minion stabbed it piercing the black robes but hit nothing as the blade slid easily between its bleached ribs. Jíen’s attacker stepped in for a kill shot but the gruesome tendril sticking out of his shirt found its grip around his throat and squeezed the last bit of life out of him. The strangled corpse fell at the necromancer’s feet.

Dravor hacked one of the hoods down with a mighty swing and the assassin put another quarrel into one that was hitherto untouched. The thief on Jíen’s minion stabbed the creature again to no effect then it retorted by clawing him. Dranor swung on the thief that had run up to Trantox as the assassin was still badly wounded but his blow was parried. Trantox then got another bolt off from his crossbow nailing his attacker seriously injuring him.

One of the hooded men tried to make a run for it as the battle turned but Dranor took the opportunity to cleave his yellow spine in two. The last hood prepared to defend himself as he looked for a way out of the gauntlet. Dranor’s axe missed its mark as it whistled in from the side but Trantox’s blade found its mark nearly killing the thief. The hood sidestepped and prepared to leap from the nearest window.

Jíen threw a spell in the wounded hood’s direction and as his body convulsed a torrent of blood forced from the petty thug’s body flew directly into the necromancer’s mouth and down his throat, Jíen’s wounds instantly healing. Even so, the last hood, the largest of the former four, was still able to make a desperate leap at the window the two bleeding halves of his body impacting into the wooden windowsill with a thud. Dranor had chopped him apart while he was still in midair.

It took only a few minutes for the trio to loot the bodies. Afterwards the necromancer immediately went to work on the corpses digging out a few long-bones for use as Bone Wands later. The three tried to recoup some sleep for the last few hours before dawn and then parted ways as soon as the purple moon was full against the golden morning horizon. They would meet back up later at the Whiskey Troll Tavern around midday.

Jíen with his disguised minion in tow found his way across town to the charnel house in the east end situated right next to the very crowded cemetery. After a few more minutes he had found the proprietor and mentioning Rantcor’s name introduced himself. The proprietor was a tall, skinny Ivoran fellow with a baldhead and sumptuous oiled brown beard named Exandnor. However, the only business the Ivoran crypt-keeper seemed to be interested in was the delivery of fresh intact corpses “no questions asked”.

Just when Jíen thought that the bard’s tip was turning out to be fruitless the Ivoran offered the necromancer an empty tomb to sleep in which slouched near the center of the cemetery. The name inscribed on the small sunken mausoleum was Ranor Long-Rider. The dead-lander thanked Exandnor for his kindness and after inspecting the new digs went on his way to the tavern.

On the way to tavern however he had to cut through the town bazaar which was already reeking with its hoards of tradesmen, merchants, rubes, thieves, and whores. He passed close by to where a gypsy clan was entertaining, juggling and the like. Their children were moving in and out of the small unwashed crowd that had gathered. “Thieving no doubt” Jíen thought.

So mostly for sh*ts and giggles as one of the earthy haired bumpy-headed urchins passed by him (they were a noticeable mating of faun, human, and naga) he quickly pat the boy on the head all the while subtly casting a Contagion spell, nothing serious only a fever possibly lethal still highly contagious though. After that, feeling wholly satisfied with himself the necromancer continued on his way to the Whiskey Troll his black draped skeletal minion following closely on his heels.