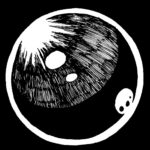 oversized marble hearth of the black hearted Korvo-Doom, master-slaver. They had presented the underworld boss with the severed heads of four Hyvalian Templars. The pair was now each 400 gold pieces richer.

The young one-armed necromancer offered Korvo an extra service, to make one of the heads speak the answers to two of his questions. The master-slaver offered 5 platinum pieces and the Deadlander worked his necromancy.

Jíen (played by yours truly): “You may now ask your questions. Um, sir.”

Korvo-Doom (rolling his eyes to the gory skull on his table): “Who’s… was, your leader?”

The dead thing lurched a bit as its jaw seemed to flap uncontrollably for a second before a gurgling wet voice oozed from behind blood-crusted teeth.

Korvo-Doom: “How many troops on the boat, the Golden Wind?”

The thing’s miserable yellow eyes rolled back up into its head as its eyelids drooped and it was still. Almost reflexively in a fit of disgust Korvo snatched the head by its scabby hair and tossed it into the fire.

Jíen: “Um. Do you need the heads for anything else? I could take them for you.”

Korvo-Doom dismissively gestured with his hand as he sat and gulped a mouthful of dark wine. “Take ‘em all.” The necromancer even pulled the head from the fire before parting ways with Dravor and retreating to his temporary home, the tomb in the city cemetery.

Jíen went about de-fleshing and boiling the heads the roasted head providing a meal of warm brains to fuel his night work. He thought about perhaps a nice head-cheese after he fished the clean skulls out of his small black iron cauldron. However, he hadn’t any spices and was an abysmal cook. So he satisfied himself by creating four Chattering Skulls instead which would help to secure his tomb. He later just dumped the steaming Templar renderings over a nearby grave.

After animating the skulls, the necromancer charged an unused long-bone from his stash with a Wound spell. Amid the musky stench of boiled human flesh the necromancer laid on the slab of the sarcophagus to catch some shut-eye, sleeping under the unblinking watch of his undead gladiator Bludbaer.

Morning at the Whiskey Troll Tavern, Trantox the assassin slid 10 gold pieces over to Jíen. The assassin wanted the necromancer to make a poison-gas grenade. The trio, Dravor the blackguard was also at the table enjoying his morning whiskey, noticed for morning the place was quite crowded.

There were cultists with black tattoos of chains around their necks, wrists, and ankles, currently probably apathetic allies at most. There were also gladiators and their entourages from far and wide, presumably for the games and a few Hill-Lander fauns whom were talking to the Troll’s owner bearing with them several barrels of high quality Hill-Lander whiskey.

Trantox left the tavern with a flourish of his cape and as the necromancer stood from the damp board readying to leave for his lair, a human ratter accosted him.

Ratter (in a hissing phlegmatic whisper): “Hey! You the one lookin’ fer black gems.”

The necromancer asked to see the gem and was shocked to find a weighty large black pearl in the palm of his corpse-pale hand. The ratter shook then opened his bag slightly revealing several other black pearls of the same apparent quality.

Jíen paid the price and stuffing the small bag of black pearls in his shirt over his heart left with Dravor following. In lieu of going to his tomb to bother creating the grenades for Trantox as he lacked the essential ingredient, poison, he instead decided to go check out the haunted house gig to try to rake in some more cash and maybe scope out a new target.

Sometime later, the duo met Zarkar the landlord in front of the tall wooden gates that stood as entrance into the adobe villa’s courtyard. After a brief and somewhat terse round of greetings, Zarkar knocked on the gates, somewhat reluctantly, but as no one answered he took the two hired Ghostbusters in. He was very displeased that the servants had failed to answer the gate or the summons he had sent at the top of his lungs.

Zarkar told Jíen in the brief stroll through the overgrown courtyard that a trio of adventurers leasing the place at the moment. They had paid him for a year in advance but had so far not really stayed in the place much. In fact, they had been gone for a few months now and he had no idea when they might come back, if ever.

The three men wandered into the heavy iron-studded front door which creaked open onto a dark, quiet, and apparently deserted front hall. Zarkar squeaked out a demand for the servants to answer but his weak words choked off suddenly as a foul stench met his nostrils.

Indeed they found the shriveled semi-mummified corpse of the cook lying face down in the kitchen by the scullery.

Jíen (stooping as he inspected the corpse): “Maybe been here several days. Maybe a week, though not much actual rot. Hmmm.”

Zarkar (sweating and shaking): “But, but, I just talked to him YESTERDAY.”

Jíen: “Well then there’s definitely something here. I think I can deal with it.”

Zarkar (as he flies out the front door): “Let me know when you’re done. I’ll be outside with your fee!”

The young necromancer cast Commune with the Dead on the corpse and found that a resident wraith had killed the man, a wraith now himself along with an upstairs maid. The necromancer’s senses were piqued as finely attuned to the uncanniness of the undead as they were. Jíen could sense a presence over the corpse which then left the kitchen then floated almost aimlessly upstairs into a bedroom behind a closed door.

The blackguard made Jíen lead the way as he could “sniff it out”. The necromancer fearlessly opened the door to the bed chamber. He already knew wraiths are nocturnal and can really only manifest and therefore be dangerous at night. The duo left and met Zarkar outside. The necromancer telling him that he would be back after dark to exorcise the creatures from the property. Dravor asked after the occupants.

Zarkar: “Adventurers. Might be Swampers or something like that. They must be adventuring out somewhere; they’ve been gone for a few months now. But they did pay me in advance so I keep the place running.”

Jíen: “Can we know their names. Just in case they come home and um … I’m in the middle of … this.”

Zarkar: “Oh yeah. I believe the lessees are called Cantra and Phenox.”