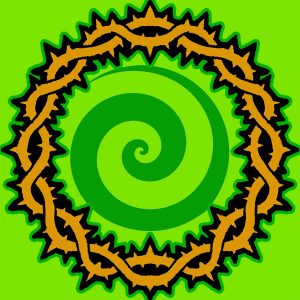 canny-jack (played by Isis) had been escorted by a contingent of city guard to an office near the White Rose Perfumery. The office was small, crowded with stacks of yellowed parchment sheets. Also scattered everywhere were small wooden ink stamps bearing various official seals from past regimes.

Meanwhile sitting at the desk, which the crew found themselves facing, was a large Westlander in full plate armor. The seal of the city guard, the ring of thorns, emblazoned on his breast. Within it was a black oak leaf under a yellow crescent moon. His plumed helm with spiked facemask sat on the well-worn desktop and his heavy bearded axe leaned against the wall behind him.

The guard that had pushed them into the office had introduced the man at the desk as Captain Fenom. The street crew had to wait while he packed his long stem bone pipe with a fresh load and lit it.

Captain Fenom (exhaling a massive fog of pungent peppery smoke): “Those gangs have been a hassle of late, the uh, Bronze Boys and um, Troll Boys …”

He took another long drag.

He reached under the desk and then tossed a leather sack filled with 8,000 bronze thorns onto it. The thud of the bag and the jingle of the coins were music to the trio’s ears.

Captain Fenom: “Take it, it’s yours. You work for me now. There’s another 8,000 thorns for you three if you bring me the head of Feenox, an apprentice of the Green Well. “

He put his feet up on the desk and dismissed the scrappy trio who made themselves gone very quickly. Pabst had snatched up the coin sack.

The trio beat it to a burned out building. The place had been a cult temple but the city lord has been hunting down and chasing out the smaller cults that have sprung up around the city. The rumor was the last holdout of this temple, a black guard, had met her fate within the charcoaled not too long ago. It was boarded up. However, Afheesh parkoured up through a window in the second story and kicked out the boards over the door on the ground letting his partners in crime in.

Wufcor dove into a pile of trash to sleep. Pabst pulled out her sleeping roll in a corner free of debris and Afheesh found a large crack in the wall and a small crevice beyond that. That was where he decided to sleep. It was where he felt most to secure to be able to sleep. However, before he drifted off he made sure to count his share of the gang bounty, 2,666 bronze pieces. Pabst had taken up the left over coin.

The robust yet still small thorn-runner lay curled up and perfectly hidden for most of the night and for most of the night he had slept rather peacefully until suddenly awakened. He heard someone arguing. He poked his head out very carefully and saw that a pair of Mantck ratlings (medium sized ratlings) and a pair of humans one carrying a sack were harassing Pabst. She had her weapon out.

Slowly the quickling crept out of his hiding place and quietly drew his weapons. As he neared striking distance, the sack bearer screamed in pain. Wufcor had stabbed him in the back.

The first Mantck struck at Pabstcan, she parried his dirk. The second rushed Wufcor wounding him badly. Afheesh charged and struck out with both of his weapons at the second Mantck whom managed to dodge the first blow but caught the second full on. It nearly killed him. The human that had been carrying the sack dropped it and taking a defensive position drew his shabby scimitar. Pabst swung wildly with her scimitar at the first Mantck but her clumsy strike did not get anywhere near him. The second human, apparently the leader due to his wearing a scale mail vest, attacked Pabst with his scimitar. She parried then immediately countered but the leaders’ sword stopped it dead. The ring of steel echoed from the blackened walls.

The second human shrieked and dropped to the dirt dead. Wufcor’s dirk had been unerring. The first Mantck lashed out at Pabst narrowly missing. Afheesh slaughtered the second Mantck with his paired swords. Pabst hacked into the leader’s side, blood gushed. He retorted wounding Pabst badly, his scimitar easily piercing her brigandine.

Wufcor moved around the fight flanking the leader and striking injuring him further. The last Mantck struck at Pabst, she barely deflected his blade. Afheesh struck at the Mantck with his first weapon and then at the leader with his second. The first landed horribly wounding the medium-sized ratling. The leader easily deflected the second. Pabst in turn chopped him down.

Wufcor jabbed his blade into the Mantck. Horribly wounded and soaked in his own blood but he was still standing. Afheesh got in close and all but eviscerated him with a double sword strike. The fight was over.

The trio immediately dumped out the sack. Out tumbled two bottles of wine, an ivory box with mother of pearl inlay, 3 silver candelabras, a poor quality carved aquamarine jar, 20 high quality arrows, a highest quality set of wrenches, and a poor quality hand mirror. Inside of the ivory box were 3 gold rings, 1 silver ring with ruby, and 5 copper rings. Their foes had been burglars. Come morning the trio decided to find a fence for the goods.

The next day under the leadership of Wufcor the crew was able to sell off all of their ill-gotten loot with Afheesh receiving a 2,311 bt (bronze thorn) cut for a total of 4,977. He left Pabst to her shopping for a great sword and Wufcor’s quest to find a leatherworker to craft a coin purse from what he cut from the Troll Boy leader. The quickling had decided to take up residence, for the night anyway, in one of the brothels operated by the Livery of Pleasures. There he would get a skilled companion for the night, a hot meal, and a lot of good wine.

The following day, and 1,500 bts poorer, Afheesh caught back up with his other two companions at the Drunken Lotus Tavern. The trio sat for a round, courtesy of Pabst, while they decided if they should pursue the head of one Feenox apprentice of the Green Well. A difficult decision especially since the Green Well was the province of the most powerful guild in the city, the Brotherhood of the Green Well. They could not resist the pay however. It was not long after that they asked around. Shortly after that they headed off to another tavern, the Green Bottle where their quarry was said to spend his lunchtime.

The trio wandered past an old tree, and from the overcrowded, and noisy plaza into the Green Bottle. It was spelled “Bottel” on the signage but all three were illiterate. The rear half of the place was elevated reached by a wide wooden stair. The bar was at the front to the immediate right of the saloon doors. The heavy counter stretched from wall to wall. Behind it at the far end were the doors to the kitchen.

Not an apparent fighter, the bartender was a broad-shouldered human, a wet leather apron over his front. Behind him were shelves lined with bottles of all shapes and sizes filled with various liquors and juices as well as a giant hogshead of ale coming halfway out of the wall. However, in a place of reverence among the shelves was a large green carved glass bottle that contained a glowing green liquid. At the bar were a very drunk barfly druid slurping ale from his leather jack and two young men, humans, in green hooded robes, a pair of apprentices of the green well.

Pabst: “Well, this seems to be the right place.”