With the blood of their enemies still fresh on their weapons and dripping from their faces, Afheesh (played by 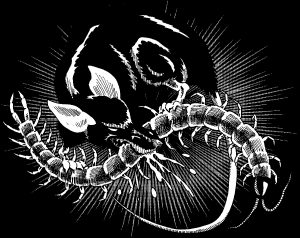 yours truly)  and Wufcor (played by Isis) dragged Pabst’s paralytic body (played by Jenn) into a boarded up warehouse a few blocks from the South Gate. They just assumed the place was completely abandoned. Soon after, Afheesh wiped his face and donned his guardsman uniform before beating it back to the barracks.

Afheesh spent early next morning scouting out the grounds of the south-gate-guard-post finding something of interest: a large building next the bursar. The building was windowless save for arrow slits at least two stories above the ground and built of white stone with an iron portcullis and heavy solid bronze doors behind. Before that intimidating edifice leaned several elite guardsmen. Afheesh soon found out that the place was the treasury of the southern guard. At once, a singular fantasy rippled through his tiny rat-brain, that of ripping off the city guard and fleeing from the curse-polluted Poisonwood to the greener pastures beyond.

After a forced march around the parade ground and a breakfast of fruit, veggies, and bread in the mess, Afheesh went to the bursar. He collected the previous day’s pay, 95 bronze thorns (pay was 100 but there was the 5% Mezcor tithe). He spent the rest of the morning beyond the thorns  inspecting incoming caravans. Relieved of duty at noon, he went to meet up with the rest of his crew.

Upon returning to the warehouse, he found Pabst fully recovered but also very stoned. At least she had donned the studded leather they had looted from a gang member’s corpse.

Wufcor (shrugging): “She stole some of my leaves and ate ‘em!”

The ratling canny-jack was referring to the leaves he had plucked from the corpse of the Dark Thorn Arborean from the previous night.

Afheesh let out a sigh and excused himself; he was going to find some work. After all, one cannot be a kingpin with no cash. Suddenly, three giant centipedes burst from a pile of garbage just outside of the warehouse and scuttled into the open doorway, Afheesh had apparently forgotten to replace the boards after entering.

Wufcor immediately leapt upon and stabbed the first one through the door. Afheesh pulled his weapons and attacked the same centipede wounding it badly. Pabst stumbled forward and clumsily swung a short sword missing her target completely. The second centipede struck at Pabst but missed. The first wounded centipede got in a lucky shot burying its poison legs into Afheesh’s chest wounding him horribly. Luckily, the ratling was tough enough to resist the monster’s paralytic venom.

Wufcor finished Afheesh’s attacker. Afheesh buried the points of his paired weapons in the second vermin nailing its corpse to the floor. Pabst hacked at the last centipede but her blade bounced harmlessly from its poison-red exoskeleton. Afheesh smashed his blades into the creature wounding it severely leaving Wufcor to finish it with his dagger spilling its verminous innards over the dirty floor.

After wrapping his wounds, Afheesh changed out of his guard uniform. Upset that it now had two large holes in the chest he folded it away. He left his two companions to see what jobs he could rake up, the higher the pay the better. First stop, the Bronze Shield Tavern, in search of Sergeant Neek.

A dense cloud of acrid pipe smoke combined with the stench of alcohol-drowned breath was as thick but nowhere near as fragrant as the sea. The clamor of rollicking patrons and the clatter and shouts from the tables where the bones rolled was deafening. The clientele were almost solely off-duty guardsmen and they were a getting very rowdy butting helms and beating armored chests and small bronze bucklers with daggers and short-swords. It did not take long, even in that noise, for Afheesh to find the sergeant. In turn, Sgt. Neek steered the “little ratling” to one Madame Canica of the Pink Lotus Livery who had a penchant for wearing purple and white silk.

Later at the Pink Lotus Livery, the ratling sat with the Madame. Canica was not overly tall but very heavily built save for the aquiline and sharp boney features of her face with almond shaped eyes set at high angles. The iris of her eyes was a reflective gold color and her pupils slits. Her nose was very small as well hinting at the Naga blood in her veins. This disturbed the ratling on a primordial level.

Over a few glasses of blood red wine, the Madame, a top member of the Livery of Pleasures guild, offered a substantial bounty for the head of the Courtesan Ebiak for leaving her house at 10,000 bronze thorns (bt’s). Soon after leaving that meeting and his head still full of wine, the Quickling easily located his quarry at the Blue Rose Livery. Afheesh rushed back to the warehouse to gather his troops.

As the three street mercs gathered and readied their gear, a loud commotion burst out just outside of the warehouse grabbing their attention. Wufcor and Afheesh strode outside where they saw a small-scale street fight involving the Moths and the Blood Moths. Wufcor shouted at them to stop.

Isis (to the GM): “Hey we gotta protect our territory!”

Afheesh followed suit but the gangsters ignored the pair of ratlings. Because of this perceived insult, the pair pulled their weapons and prepared to wade into the scrap. Pabst immediately charged from behind, past the pair, and directly into the fray.

Pabst hit and wounded the nearest gang member with her short sword. Afheesh on the other hand, spotted out the Moths’ leader and charged him. The gang leader parried one weapon but nailed by the second. He retorted with a massive and accurate blow Afheesh dodging the short sword point by a hair. Another gangster engaged Pabst, she parried and then counter attacked dropping him in a single blow. Wufcor backstabbed “the weakest looking guy” dropping him instantly. A scimitar blade wielded by a Mantck ratling (a medium sized ratling) barely missed Afheesh. Another Mantck struck at Wufcor barely missing the canny-jack.

Desperately, Afheesh stabbed at the leader who clinched the first weapon but the second skewered the man’s belly wounding him badly. However, the leader easily wrenched the clinched psi from Afheesh’s small claw tossing it away. The Mantck on Wufcor easily parried his blow. The other Mantck swung his scimitar at Afheesh barely missing the smaller ratling. Pabstcan attacked another gangster but was caught in a clinch. The Mantck on Wufcor struck at him barley missing.

Afheesh moved towards his lost hook-guard weapon. Wufcor struck with perfect accuracy at the Mantck but was equally masterfully parried. The Moth leader that Afheesh had wounded called for a retreat. He was apparently bleeding out. The opposing Blood Moth leader called his retreat immediately after.

Pabst broke the clinch and as that gangster turned to run, she drove her blade into his spine killing him instantly. Afheesh triumphantly held up his recovered weapon as the last of the street thugs disappeared into the shadows and filthy alleys of the city. After looting the corpses, the split turned out to be 133 bronze thorns each with the remainder going to Pabst her share being 134.

Afheesh eyeballed his crew. They were still in no shape to take on a job at this point. Pabst worse for the wear, stated that she was going to rest for another full day. Wufcor figured why go out to work now, he had just been paid. He was going to go pay for some fun. Afheesh shrugged and went to go procure a cheap room; he had guard duty in the morning.