Afheesh shot after Wufcor who was free of his shackles, fleeing, and armed with a stolen dagger. The 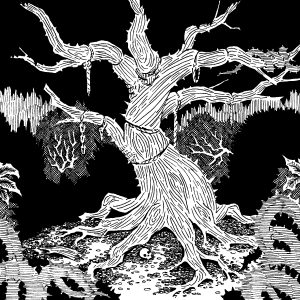 quickling guard tripped the fleeing canny-jack with his tail. Wufcor flopped onto his back hard with a blast of dust and dry leaves. Afheesh held the tip of his dagger to his former companion’s throat.

As a result, Wufcor let loose his white knuckled grip on the dagger letting it drop to the ground.

Pabst tried to move in and grapple the traitorous ratling but missed by a mile.

Isis (shrugging): “Look Sis I figure he could’ve killed me at any time, so I hope he has a plan.”

Pabst reluctantly surrendered under the remaining guard’s spear points and Sergeant Neek’s sword. The prisoners were shackled once again and after another hour were finally led to the Tree of Judgment.

A large twisted trunk was before them that sported large thorns here and there over its pale striated bark. Deep scars crisscrossed the bole where prisoners had been lashed to it and left to die in the Poisonwood. The lower limbs, as thick and twisted as the rest, also exhibited deep hanging scars most still with some rusted bit of chain or rotted rope still dangling wafting or tinkling in the slight breeze. There were a few skulls and fragments of bone scattered among the surfaced roots and woody knees. Due to their diminished numbers, the guards were in a rush and so lashed the pair of prisoners to the bole before hastily retreating aboard the wagon.

The pair watched Afheesh ride away as the sergeant congratulated him, his attitude towards the ratling totally changed. The officer was counting himself fortunate that the guard had discovered such a skilled new recruit. The criminal pair was mumbling curses under their breaths. All too soon, the wagon was out of view and then the rolling crunch of its wheels faded into the general ambience of the dreaded Poisonwood.

There they were, Wufcor the ratling canny-jack and Pabst the female human duelist all alone and lashed to the bole of the execution tree. Intermittently tiny vermin of all kinds swarmed and crawled over their bare skin, fleas, wood lice, beetles, the occasional spider or centipede. Never had the pair felt more vulnerable, every crunch or slight movement of serrated leaf or thorny twig caused them to cringe. They nearly panicked when a large shadow swooped far above the autumnal umbrage momentarily blotting out the scant rays of sun that penetrated the reeking tree cover.

The poisonous musk of noxious weeds and nettles stung their nostrils and the rough, dry bark chafed and scratched at their skin. The thorns drew some blood. Adrenaline sharpened their ears and to them it seemed that the whole wood had come alive. It had come alive with things that were crawling and slithering through the dense underbrush. They writhed with discomfort.

Meanwhile, Afheesh was sitting with Sergeant Neek in a random saloon who was slinging back drink after drink. The ratling had tried to make use of the officer’s improved attitude towards him by getting assigned to the moneychanger at the front gate. However, that had gone nowhere. It was very near sundown when a still sober Afheesh took his leave and rushed to rent a wagon.

In the now dark Poisonwood, a very upset Pabst kicked a large black scorpion from her foot. Wufcor finally worked himself free of the ropes and soon freed his companion as well. The duelist secured an old branch that she could as a club. All the while, they swore to each other that they could see large black shadows skulking in the darkness behind a tangle of thorn trees and a dense thicket. Indeed, something was approaching them. They prepared to defend themselves determined to throw stones, bite, claw, and kick, whatever it took to survive.

On the trail to the Tree of Judgment to which his partners had been tied, Afheesh whipped the horses to speed. He was racing the setting sun as the golden disk sank into a blood-sky behind the black horizon. Already the purple moon with its golden ring was strong, dominating the eastern horizon. Although he could barely see it through the still dense but sickly foliage of the autumnal Poisonwood. He kept madly snapping the reins hoping to keep going just a little faster than before.

The wheels smashed into a small ridge of stone jutting from the rough path, the wagon jumped suddenly up onto the air for a split second. When it smashed back down onto the road, the ratling found himself airborne as the pungent winds of the wood roared into his face. Soon enough he flopped hard back onto the hard wooden driver’s seat with a guttural “oof”. It seemed an eternity until he had reached his goal. The wagon stopped in an explosion of dust, pebbles, and dry leaves.

Wufcor was guarding a paralyzed Pabst. Several giant spiders had attacked them not long before Afheesh’s arrival. Fortunately, they had been able to fight the monsters off killing virtually all of them. Unfortunately, Pabst had been bitten.

Afheesh (from the driver’s seat of the hay wagon): “Good you’re free! Get in HURRY! They close the gates at first gloaming!”

Seconds later the wagon was speeding back the way it came hitting the same bump again and nearly throwing Pabst were it not for Wufcor who was just able to grab onto her before she flew free of the wagon. For a short stretch just before the great thorn ring became visible, they could all hear something quite large chasing after the wagon. Whatever it was, it had halted as soon as the thorn-wall of the city came into view. The outer gates were just starting to be closed. Without stopping Afheesh raced the wagon in through as he kept shouting, “Don’t shoot, Guard! Guard! I’m a GUARD!”

Sometime later, the pair of ratlings, Afheesh and Wufcor, were dragging the limp, unconscious body of Pabst. They were nearing a deserted warehouse where they had planned to pass the night and wait for the effects of the spider venom to wear off of the duelist. Suddenly from around a corner they heard, “Well, well, well. What do we have here eh boys?”

A group of Bronzeboy gang members stepped out of an alley from around the corner confronting the ratlings. There were three well-armed humans, a single Mantck ratling (a medium sized ratling), and a Darkthorn Arborean (a purplish-gray tree-man covered in thorns).

Exhaling a mighty sigh pregnant with frustration, Afheesh dropped the paralytic duelist and pulled his paired weapons as he walked towards the gangsters. Wufcor followed pulling the dagger Afheesh had given him earlier “just in case”.