The ratlings, Afheesh (played by me) and Wufcor (played by Isis) stood in the front ranks of the city guard of 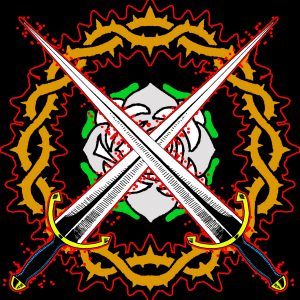 the White Rose Well smart in their uniform green cloaks with obsidian leaf clasp. They were in formation to the northeast of the White Rose Well in the plaza before the White Rose Perfumery dozens of feet away from the well. Captain Fenom wearing an open helm with a bright green and gleaming black feather plume was over by the well talking with the human duelist, Pabst (played by Jenn).

The ratling quickling, Afheesh, strained to overhear them as the captain’s subordinate, wearing an open helm with a bright red feather plume, maintained the formation. As a result, the ratling could see that a shiny new great sword hung on Pabst’s back. “That’s new”, he thought.

The captain passed Pabst two potions, a Bull’s Strength Potion and a Cat’s Grace Potion to drink on the spot. Apparently they were had some sort of delay effect brewed in. It was not long before another company of Tanglethorn guardsmen marched in from the east cloaked in brown with a yellow lotus circled by black thorns on their backs. Their leader had on a bronze open helm similar to Capt. Fenom’s but with bright yellow feathers mixed with black.

The opposing captain’s second halted the incoming march only a dozen feet away from the well. For a split second, there was a strained silence as the dust settled. Bronze chest plates reflected the late morning sun as it glinted from the shining tips of steel pikes and polished bronze helmets.

The yellow lotus captain strutted over to captain Fenom removing his helmet as he neared. Their opens palms smacked together then they squeezed, their knuckles creaking. Then they began to speak as Fenom dismissed Pabst whom rejoined her comrades at the line.

Pabst: “Something about control of the White Rose Block. Whatever. I got this.”

Captain Fenom (his voice echoing his arms rose): “Terms have been agreed upon; a duel will determine the ministration of the White Rose Block hence forward! Our champions will meet here at the well! Both armed as they are! This duel is to the DEATH!”

Afheesh (to Pabst): “Still got this?”

Afheesh: “I’m not worried; if you die I’ll have to recruit another fighter. It’s a hassle.”

The yellow lotus captain raised his right arm and shouted, “Agreed!” He then motioned for his champion to come to the well. From behind the ranks of the yellow-lotus-guard emerged a short vicious looking human. He was wearing a bronze pectoral plate, bronze bracers on his forearms and a steel buckler on his right arm. He had paired dirks.

Capt. Fenom motioned for Pabst. She strutted over to him and the well. She pulled her scimitar and prepared her buckler.  Each captain seemed to give his respective fighter a painfully short pep talk and then both backed off. Fenom gave the signal, “Fight!”

The yellow lotus champion, obviously a knife-fighter, struck with a double dirk attack, Pabst tried to parry both thirsty blades with her buckler. However, she had opened herself up and both blades struck home (she rolled a Natural 1). Pabst backed off to recompose herself blood gushing from her side (recovery roll). Showing a razor-tooth grin, he let her take a breath. She moved back in and retorted with her sword but he parried with his right and struck again with his left opening another nasty wound in her belly. She struck out yet again but again he parried and slashed. This time she parried his retort and countered. He parried and stabbed but she parried the blow.

Pabst charged and hacked at his head, he parried the blow. He struck out at her she parried and countered. He parried that blow and stabbed at her throat, she parried, barely. The two opponents circled one another like hungry beasts searching for any opening. She attacked again but fumbled the strike accidentally tossing her weapon several dozen feet away. Without missing a beat, she immediately drew her back up weapon, her brand new two-handed great sword.

Pabst leapt back and struck hard with her great sword cracking through each of the knife-fighter’s ribs like a butcher against a rack of beef. A long ribbon of blood streaked his side and gushed onto the ground. He retorted with a masterful stroke that awed all onlookers (a natural 20). Pabst’s companions stood frozen with horror. Suddenly, she parried both blades with a single sweep of her buckler (natural 20 parry) then immediately struck at his bared ribs burying her blade to the hilt deep in his heart. His lifeless body flopped to the dirt. She withdrew her weapon from his mutilated chest. Both companies were struck with silent awe. Then captain Fenom and his men roared in victory.

Pabst (still bleeding, turned to her companions): “Drinks are on me!”

Later that afternoon the ruthless trio was having drinks in the Thirsty Thorn Tavern. Pabst was still was still worse for the wear but seemed not to care at all. Captain Fenom had paid her 10,000 bronze thorns (bt) for championing his cause. She had also told him where she was staying, at the Yellow Lotus Inn, in case he needed her again. Wufcor was a little annoyed with this as he was also staying with her and was nervous about the city guard knowing where they were sleeping.

Pabst ordered a bottle of Assassin Vine Wine and after paying the 1,000 bt bill, she stood up in the crowded bar and shouted, “Cheers to the greatest duelist in Tanglethorn!”

The three villains ate stew and bread and guzzled the bottle of expensive wine shortly thereafter. Pabst and Afheesh caught a nice narcotic buzz. Wufcor on the other hand, passed out felled by the powerful wine. The remaining pair drank until the early evening when they left with Wufcor piggyback on Pabst. They began walking back to the Yellow Lotus Inn when suddenly they heard warning bells ringing.

When they looked in the direction of the sound, they saw a massive insect swarm like a thundercloud descending on the city from above. The trio immediately beat it to Pabst’s room at the inn and made sure the door and window were shut and sealed. They tossed Wufcor into a corner.

Several hours later the all clear signal rung out and the trio, never ones to miss an opportunity, went out into the streets to see if they could loot anything from among the carnage. Wufcor was still a bit groggy. Of course, it was not long before they ran into a small cadre of gang members, Bronze Boys. The gangsters, like the trio, had found nothing on any of the bodies lying in the street.

Pabst: “He you Bronze-Boys! You need any help with the Troll Boys again!?”

Their leader shouted back, “We handle our OWN! Why you lookin’ fer TROUBLE!?”

Afheesh pulled his weapons in response, Wufcor did the same and Pabst began to laugh as she pulled the great sword from her back.